You are here: Home / Entertainment / Francois Hollande answers to Rihanna in a letter 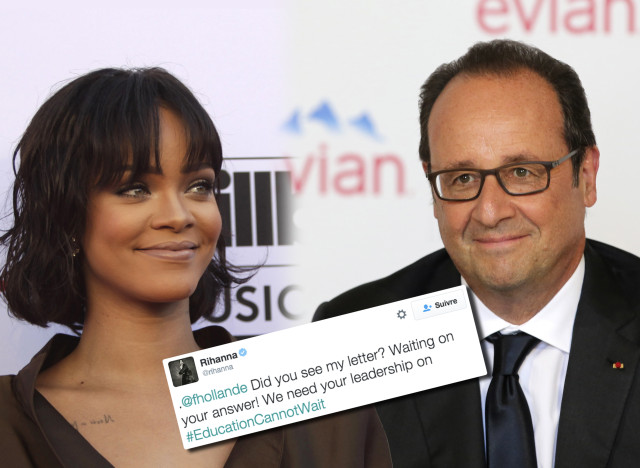 The president of France, Francois Hollande sent a letter to Rihanna as an answer to her message posted on Twitter about the education. Rihanna, involved in the #EducationCannotWait movement posted the ‘Francois Hollande, did you read my letter?’ message on Twitter, worried that her message about the Education Cannot Wait fund could be lost in the thicket of the French Post or in the halls of the Elysee Palace. Hollande answered to her the next day, in a tweet, assuring her that she will get a detailed answer. He sent Rihanna a letter the same day. According to the text, published in Le Parisien, the president thank the singer for making him pay attention to the initiative she supports. Hollande wrote to the pop star Rihanna that the education must be an absolute priority for the international community.

The war, the lack of development, the poorness, the terrorism, are not allowed to deprive the young people of what is the most important: to have access to the needed knowledge and expertise to find hope, to manage to get over the difficult situations and to be able to build a future. The president of France puts accent on his long letter on the creation of a global action for education and for the consolidation of the France’s contribution to the international initiative launched in this domain. He also wrote about the 100 million euro increase the France’s contribution to the UN’s agencies. Rihanna has 65 million followers and she uses her fame to support the Education Cannot Wait organisation whose spokesperson she is. Supported by UNICEF, this movement wants to obtain the needed money to offer access to education to 75 million children living in crisis countries. Rihanna’s tweet for Hollande has 9.300 shares and 12.000 likes from the Internet users.

When it comes to ransomware, you don't always get … END_OF_DOCUMENT_TOKEN_TO_BE_REPLACED

Peyton Carr is a financial advisor to founders, … END_OF_DOCUMENT_TOKEN_TO_BE_REPLACED