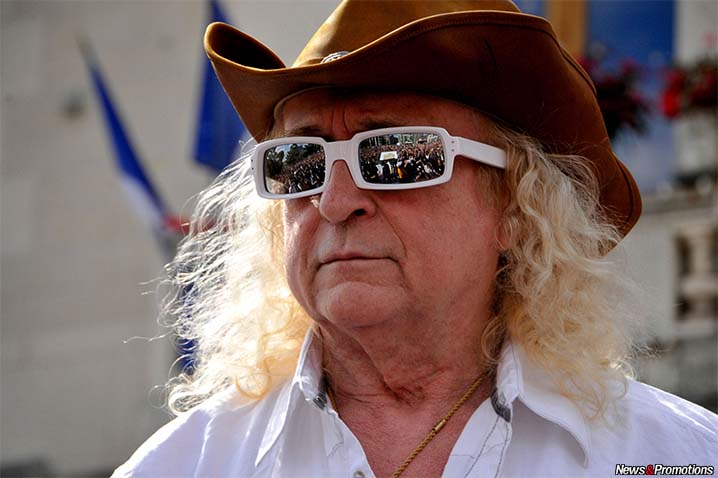 The French singer Michel Polnareff, who was hospitalized on Saturday in Paris, suffers from ‘a pulmonary embolism’ which puts his life in danger, according to a medical report sent by his staff and quoted by the AFP. The 72 years old interpreter of ‘At poupée qui fait non’ was forced to cancel the concerts from Friday in Paris and from Saturday in Nantes. Michel Polnareff, known for his sun – glasses with large lenses, his blonde hair and fancy pants, was hospitalized on Saturday afternoon at the American hospital in Neuilly, in the Paris region, according to his agent. ‘Michel was suffering from sinusitis at the beginning of the week that degenerated into an obstructive bronchitis,’ the agent said. In the middle of the tour in France, for the first time after a pause of nine years, the singer was the subject of ‘some infiltrators’, but on Friday morning he felt dizzy and he had a decline in the tension.

The concerts in Paris and Nantes were to put an end of a seven month tour in the whole France, but also and in Belgium and Switzerland. Through his tour that took place in 2007, marked by a mega-concert at the esplanade of the Eiffel Tower on July 14, the legend of the French pop music put an end to a career that started in 1973, the date when he had come from the US because of the financial problems. In October 1972, his poster ‘PolnaRévolution’ in which he exposed his buttocks to promote a series of concerts in the Olympia Hall, provoked a huge scandal. Over the twenty-five year career, Michel Polnareff became a discreet person, launching only two live albums: ‘Live At The Roxy’ (1996) and ‘Ze(re)Tour 2007’ (2007). The last studio album, ‘Kama Sutra’ was launched in 1990.

When it comes to ransomware, you don't always get … END_OF_DOCUMENT_TOKEN_TO_BE_REPLACED

Peyton Carr is a financial advisor to founders, … END_OF_DOCUMENT_TOKEN_TO_BE_REPLACED