You are here: Home / Featured / The friendship of George W. Bush and Michelle Obama 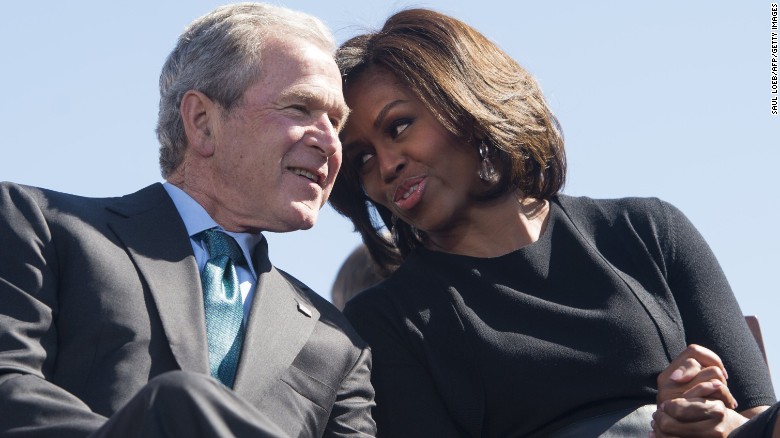 Saturday’s dedication of the National Museum of African-American History and Culture brought together the president who signed into law the funding for the museum and the president who was in office during its completion.

But the gathering of the 43rd and 44th first couples also saw the reuniting of two unlikely friends.
Over the past eight years, former President George W. Bush and First Lady Michelle Obama have been seen becoming increasingly chummy. At public events, the two can often be found sitting next to each other, sharing a laugh or lending a hand to hold.
Saturday’s ceremony was no exception. During the event, Obama reached over and grabbed Bush into a hug as their spouses clapped and looked on.

This wasn’t the first time the former president and the current first lady have come together.
They joined hands during a singing of “The Battle Hymn of the Republic” at an interfaith memorial service for the victims of the Dallas police shooting on July 12.

Their friendship seems to have grown deeper after they both attended a commemoration of the 50th anniversary of the historic civil rights march in Selma, Alabama on March 7, 2015.

Bush and Obama sat next to each other and waved to onlookers in the crowd while also sharing smiles.

The bond between the two dates back to the inauguration of President Barack Obama in January 2009. Bush took time to talk with Mrs. Obama and meet her two daughters, Sasha and Malia, during the swearing-in ceremony.

When it comes to ransomware, you don't always get … END_OF_DOCUMENT_TOKEN_TO_BE_REPLACED

Peyton Carr is a financial advisor to founders, … END_OF_DOCUMENT_TOKEN_TO_BE_REPLACED