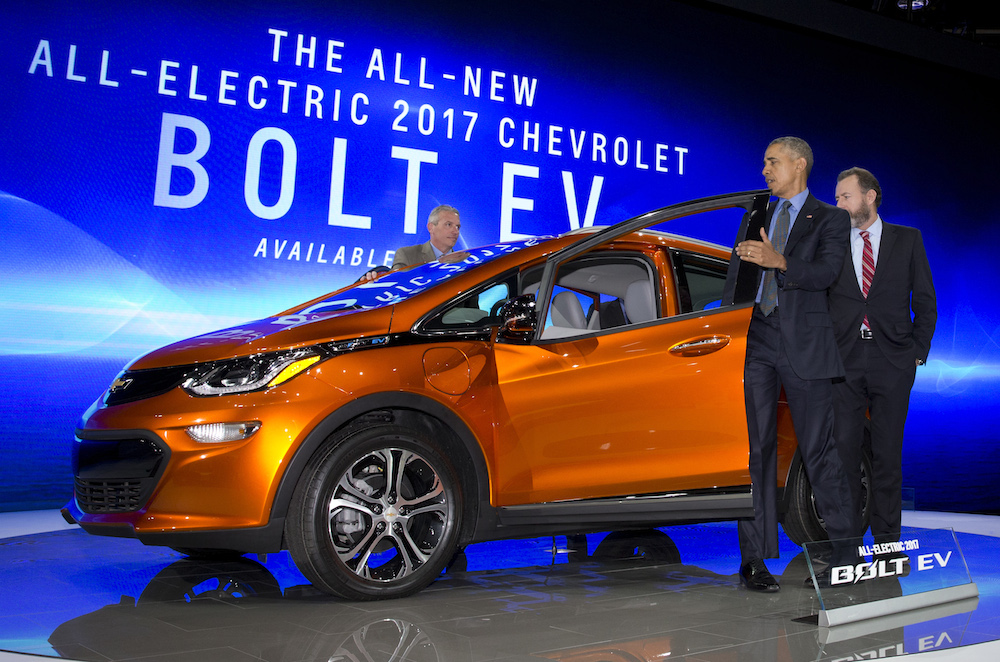 Two of the world’s leading electric vehicle (EV) producers say that they will soon deliver 200+ mile range EVs at a game-changing price of $30,000 or less — including tax incentives.

Until now, EVs have not been considered a mass-market consumer vehicle in the United States for two key reasons — high price and low range. But with battery prices continuing their unexpectedly rapid price drop, both General Motors and Tesla have announced that they can address both of those problems simultaneously in the near future. For GM, it will be the Chevy Bolt, and for Tesla, the Model 3.

“The average new car costs about $31,000, according to an analysis by Salim Morsy of Bloomberg New Energy Finance,” as BloombergBusiness reported Tuesday. As you go above $35,000 it gets very hard to find any car similar in size to Tesla’s Model 3 with over 100,000 vehicles sold a year.

It’s worth noting that more than a dozen states have an additional tax credit for EVs — $2,500 in California, Tennessee, and Massachusetts, and a whopping $6,000 in Colorado. That means many people will be able to buy the Bolt for a net price below $30,000.

If you are wondering how GM can you possibly offer an EV with that range at that price — while still asserting they will make a substantial profit on the car — the auto company disclosed last fall that the battery cell for the Bolt from the South Korean company LG Chem will cost just $145 per kilowatt-hour (kWh), an astounding price.

How astounding? In 2013, the International Energy Agency estimated EVs would achieve cost parity with gasoline vehicles when battery costs hit $300 per kWh of storage capacity, which the IEA said would happen by 2020. Then, last spring, a detailed analysis in Nature concluded that as of the end of 2014, “the cost of battery packs used by market-leading BEV manufacturers are even lower, at US$300 per kWh.” That study concluded:

“If costs reach as low as $150 per kilowatt hour this means that electric vehicles will probably move beyond niche applications and begin to penetrate the market more widely, leading to a potential paradigm shift in vehicle technology.”

So $145 per kWh is a paradigm-shifting, game-changing price. And GM is expecting the price to continue to drop, as it made clear in this chart:

By the way, if you are also wondering whether LG Chem is “ticked off” that GM took the unprecedented step of publicly disclosing the price it’s paying for LG’s batteries, they are.

As for the sticker price of Tesla’s Model 3, the company confirmed this week what CEO Elon Musk said last year, “When I say $35,000, I’m talking about without any credits.” The Model 3 will be priced at $35,000 — before federal and state tax credits are applied. The company will start taking preorders in March and is promising delivery in fall of 2017. That said, hitting delivery times has not been Tesla’s strong suit, and some analysts believe the car won’t be available until 2018.

Even so, the rapid price drop in the cost of both batteries and long-range EVs is likely to change the game for their sales, as this analysis by Bloomberg New Energy Finance chart shows:

Finally, the discussion here does not even consider what the Chinese will be able to achieve with their massive investment in batteries and electric cars. The Chinese are seeking to become the world leader in the production and use of both affordable batteries and EVs. Given that they achieved these goals in both solar photovoltaics and wind power, it would be unwise to bet against them.

It appears we are very near the same type of inflection point in price and performance that led to the explosion in solar PV several years ago. Since electricity remains by far the best and cheapest alternative fuel that can be made without releasing CO2 — one that is cheaper to run a car on than gasoline even at current low oil prices — this game change is good news for both consumers and the climate.

When it comes to ransomware, you don't always get … END_OF_DOCUMENT_TOKEN_TO_BE_REPLACED

Peyton Carr is a financial advisor to founders, … END_OF_DOCUMENT_TOKEN_TO_BE_REPLACED