You are here: Home / Sports / Green Bay Packers vs. San Francisco 49ers All Bets Are Off 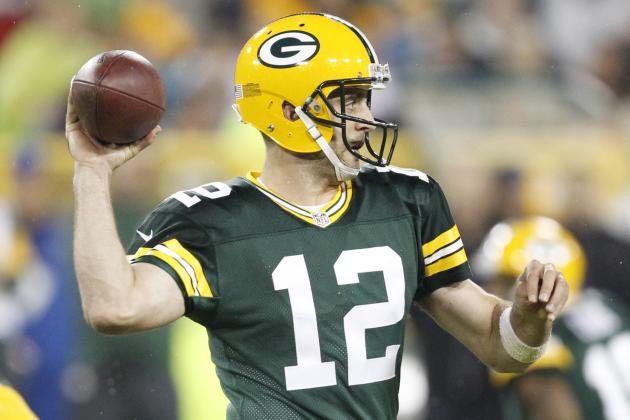 The San Francisco 49ers own the upper hand in the recent rivalry with the Green Bay Packers—and yes, we can call it a rivalry—with four straight victories and three covers. But the 49ers are not the same team they were even just a season ago, which is why they’ll go off as home dogs when they host the Packers on Sunday afternoon.

Point spread: The Packers opened as 9.5-point favorites; the total was 48 early in the week, according to sportsbooks monitored by Odds Shark (line updates and matchup report).

Why the Packers can cover the spread

The Pack is off to a 3-0 start to this season both straight up and against the spread after Monday night’s 38-28 victory over the Kansas City Chiefs at Lambeau Field. Green Bay led 14-0 before the Chiefs hit the board and built that lead to 31-7 in the third quarter before taking its foot off the gas. The Packers outrushed K.C. 123-75, won time of possession by a 34-26 margin and covered as six-point favorites.

Green Bay opened this campaign with a 31-23 victory at Chicago, covering the six points, and then knocked off the Seattle Seahawks 27-17, covering at four points. So the Packers are already rolling.

Green Bay lost wide receiver Jordy Nelson for the season before it began, but the reacquired James Jones has already caught four touchdown passes. Must be the system.

Why the 49ers can cover the spread

The Niners are 1-2 both SU and ATS after a lost weekend in Arizona resulted in a 47-7 loss to the Cardinals. Quarterback Colin Kaepernick tossed a pair of pick-sixes in the first quarter, and that was basically the game right there.

San Francisco lost at Pittsburgh 43-18 just before that, so that’s two duds in a row. But can the 49ers really be that bad? Yes, they went through a lot of changes over the offseason, but this is a team that looked good in a season-opening victory over Minnesota, and the Vikings have won two straight games since then.

Kaepernick is 3-0 against the Packers over the last couple of seasons, putting up some crazy numbers. If he can regain some confidence, quit with the picks, get some help from the defense and perhaps turn this game ugly, the 49ers have a shot.

Kaepernick caused Green Bay’s defense some serious headaches in those recent victories, and he’s capable of doing that again. If he can avoid turnovers, San Francisco can score enough to keep this one close. The NFL is an up-and-down league. The Packers might win this game, but the smart money here is with the home-dog 49ers, plus the points.

All point spread and lines data courtesy of Odds Shark; all quotes gathered firsthand unless otherwise noted. Check out Twitter for injury and line-movement updates and get the free odds tracker app.

When it comes to ransomware, you don't always get … END_OF_DOCUMENT_TOKEN_TO_BE_REPLACED

Peyton Carr is a financial advisor to founders, … END_OF_DOCUMENT_TOKEN_TO_BE_REPLACED