You are here: Home / Lifestyle / Green Living in Asheville’s Montford 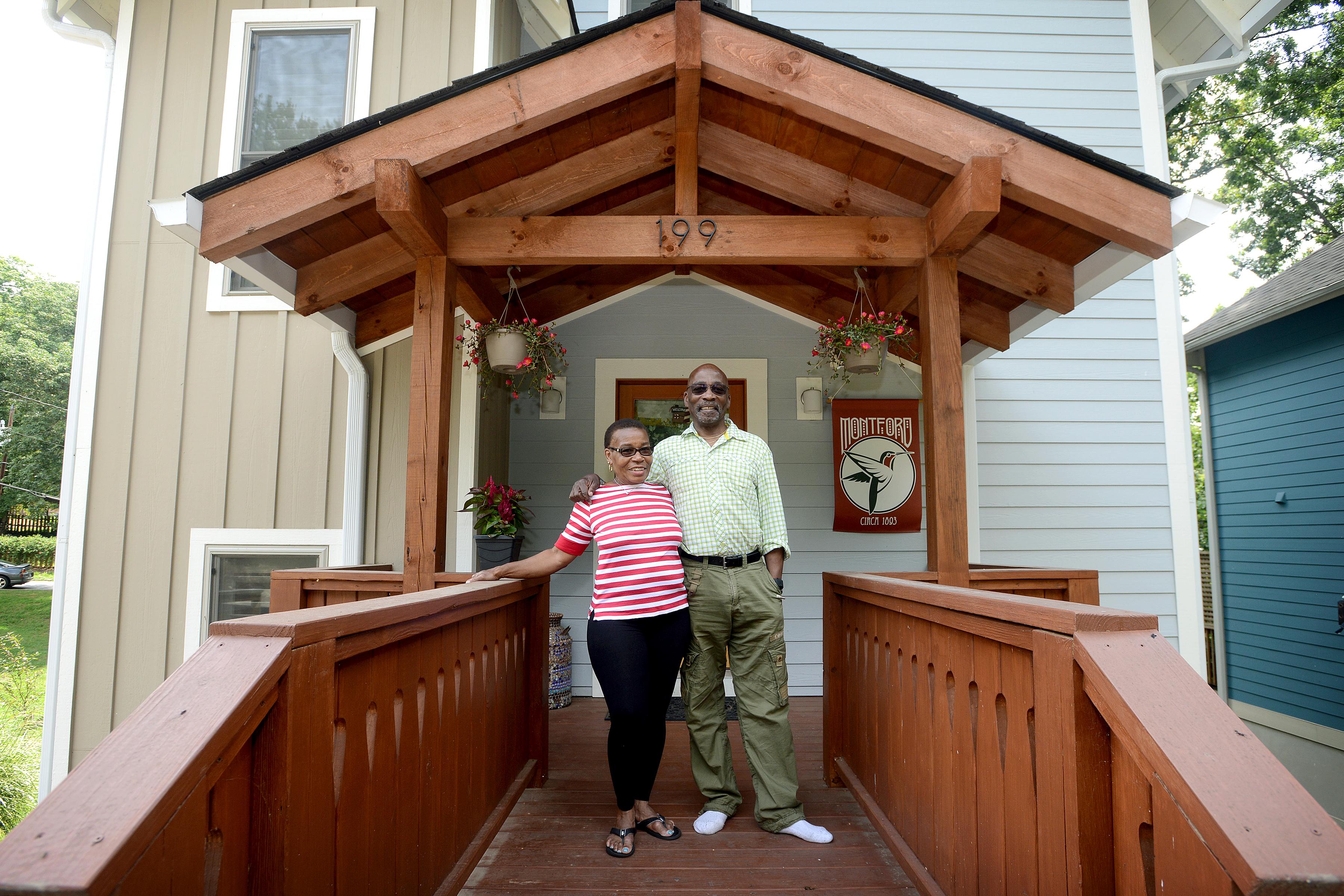 Having spent much of their lives in New York City, Kaola and Larry Smallwood did not envision themselves entering retirement together somewhere else. But not long after Kaola visited the Asheville area, spending time with friends at a golf resort about four years ago, the couple decided to leave the Brooklyn dwelling where they had lived for several decades.

Although Kaola grew up in North Carolina — in Fayetteville — it was the first time she had seen these mountains. And after visiting some main attractions like the Biltmore Estate and the North Carolina Arboretum, the idea of moving here beckoned.

She started thinking, “Yeah, I can do this.”

Since then, they have found space for many of their belongings in their new home, a modern, energy-efficient house in Montford that they moved into a little more than a year and a half ago. Among them are colorful decorations and family photographs.

Tall and slender, the three-story house embodies green living without sacrificing style. The home has a contemporary feel, with polished hardwood floors, porcelain bathroom tiles and a neutral color scheme. A spacious, wooden staircase winds to the top floor, which includes a guest room and colorful master suite that is adorned with butterfly ornaments and that opens up onto a wooden balcony where the couple sometimes has coffee in the mornings.

Beyond the modern appeal of the house, it has its share of energy-saving features. Among them are thermal windows and sprayed foam insulation, along with energy-efficient appliances and heat pumps.

“I love building beautiful homes, and I love building solid homes,” said Raymond Thompson, who oversaw the building of the house and who runs the Asheville company Surefoot Builders Inc. Built shortly before the Smallwoods moved in, the house is LEED-certified by the Western North Carolina Green Building Council.

Buy PhotoLarry and Kaola Smallwood have lived in their 2,200-square-foot house in Montford for about a year and a half. (Photo: Angeli Wright/CITIZEN-TIMES)

Since becoming a general contractor in 2010, Thompson has built about a dozen homes in Asheville. The idea behind their design, he said, is to minimize their footprint while maximizing the use of each space, promoting energy savings. The Smallwoods’ lot is small, only about a tenth of an acre and including a retaining wall, adorned with flowers and shrubs, atop which the couple parks their car.

For the Smallwoods, it is only their second home together after having lived in an apartment in Brooklyn for more than 40 years. Tucked on the second floor of a brownstone that was erected in the late 1800s, the apartment was part of a residential cooperative in which the couple owned several shares.

Within three years of visiting her friends at the Champion Hills golf resort in Hendersonville, Kaola and her husband uprooted themselves, leaving for Asheville.

After spending about a month in a hotel in the area, they closed on the Montford house, using money from selling their apartment.

“We were elated,” Kaola said, noting that besides installing a new water heater, the house needed no renovations. “I love the whole house.”

The reason the couple left Brooklyn was the widespread gentrification there, noted Kaola, a former middle school principal. Her husband had long worked as an engineer.

Even so, they return regularly, visiting their grown daughter. They also have a second home in the Pocono Mountains, in northeastern Pennsylvania.

Asked whether she misses New York, Kaola said, “I think about it.”

But for the couple, in their 60s, their new home represents a more relaxing period in their lives.

“I didn’t come to Asheville looking for a job,” Kaola said. “I don’t need to be working anymore.”

The home: A slender three-story house in Montford of 2,200 square feet, with four bedrooms and 3 1/2 baths.

The homeowners: Kaola and Larry Smallwood, who previously lived in the same apartment in Brooklyn, New York, since the 1970s.

Wow factor: Its many energy-saving features including thermal windows, special insulation and appliances.

When it comes to ransomware, you don't always get … END_OF_DOCUMENT_TOKEN_TO_BE_REPLACED

Peyton Carr is a financial advisor to founders, … END_OF_DOCUMENT_TOKEN_TO_BE_REPLACED