You are here: Home / Technology / Hands on with the Awesome Star Wars BB-8 by Sphero 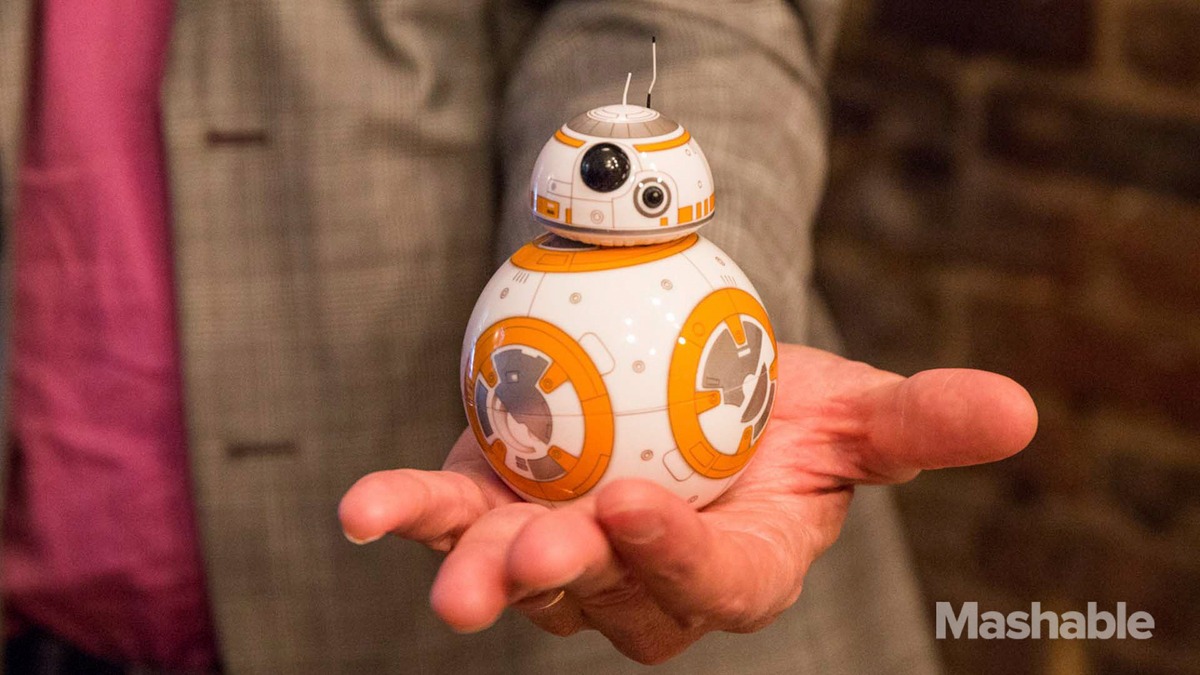 I could not stop humming the theme from Star Wars, but then who could blame me? I was playing, for the first time, with a real Star Wars BB-8 droid. As I drove BB-8 about the floor, sending it zipping this way and that, the tiny camera on its cap-like head seemed to follow my gaze. The faster the little robot went, the less the cap that sat impossibly atop its ball body seemed to move.

As the sound of the robot and the Star Wars theme pumped urgently from the iPhone I was using to drive BB-8, I grinned like an idiot, becoming more and more convinced that I was playing with what could be one of the hottest toys of the holiday season.

But first, let’s back up a bit.

A few months from now, Disney-owned Lucasfilms will re-launch the Star Wars movie franchise with Star Wars: The Force Awakens. Much has been written about the plot and characters for the film, which continues the story 30 years after the events of Return of the Jedi.

However, Disney and Director JJ Abrams created a mini sensation last spring when they followed the onscreen reveal of a brand-new droid — the ball robot known as the BB-8 — with an onstage demonstration of a life-size, fully functional BB-8 robot.

After reassembling my blown mind, it didn’t take long for me to realize I’d seen something like this before. The technology on display must have been either a knock-off of the popular Bluetooth-controlled, gyroscopic Sphero ball robot, or the genuine article. It turned out to be the real deal and when I spoke to Sphero Chief Creative Officer Robert Maigret (a former Disney employee), he revealed the topper: Sphero was making a BB-8 robot toy.

“It was a very condensed production time period,” Maigret told me, explaining that Disney CEO Bob Iger, after tapping Sphero to build the movie robot, recommended that they become a licensed partner and build this home robot, too, and in time for the holiday buying season. “We usually have 18 months. This project compressed to half of that.”

Playing with a Star Wars droid

Even so, little, if anything, about the finished BB-8 by Sphero looks half-baked. The packaging, for instance, is a gorgeous black matte with Star Wars iconography and a large photo of BB-8 in action (along with three distinct brands: Star Wars, Disney and Sphero). It feels substantial. “Every touch point of the brand and a project is consistent. The branding has to be very Star Wars,” said Maigret. When you pull of the top box cover, it reveals what looks like packaging for an actual droid — an intentional touch.

When Maigret revealed the robot nestled inside, though, I had a momentary pang of disappointment. It’s small — much smaller than the box photo — just under 4.5 inches tall with its removable head/cap on (it weighs just 7 ounces). There is a reason for the size.

The heart of BB-8 by Sphero is the ball, which happens to be the exact same size as current Sphero robots and features the same gyroscopic mobility and obstacle-detection technology. It is also, like those robots, self-contained — no plugs, no wires. BB-8 by Sphero charges when you place it on the induction-based charging platform, which also looks like something right out of Star Wars. A three-hour charge gives you one hour of play.

A moment after removing the ball from the box, Maigret took out the smaller head and placed it on the robot. Suddenly I was staring at a replica of BB-8, right down to the thin dual antennas sticking out of its head. The body art is all painted on, but I imagine rolling it around with anything more detailed and substantial than paint might have been a problem, plus the head would never stay on if it had to keep moving over surface bumps.

BB-8 by Sphero works similarly to how the original Sphero robots work. You connect the robot to the free downloadable iPhone or Android app via Bluetooth Low Energy (original Spheros use standard Bluetooth) by placing the phone near the robot.

As soon as Maigret connected the robot to his phone, BB-8 came alive and started moving about. If it moved slowly, it had a slightly drunken locomotion — accentuated by the head that moved separate from the ball body, always seeking to remain on top. It also appeared to look about the room, independent of which way the ball body was facing.

BB-8 can move on its own, but most people will control BB-8 with the app. To do so, you have to calibrate the ball, moving a BB-8 avatar around on screen until a real glowing blue dot in the ball is facing you. This is much easier than it sounds. BB-8’s entire body can glow a variety of colors, including red to let you know it’s running low on battery power.

One of the very big differences between the old Sphero and BB-8 is that the head — which always seeks to face forward — gives you a much clearer indication of exactly which way the robot is facing. Maigret let me try out BB-8 on the floor and I was shocked by how quickly I mastered it.

Throughout my experience, I could not get over how lifelike BB-8 by Sphero seemed.

Maigret explained that for this project, “We had to be great animators… there is a lot of movement and motion you’ll see in BB-8 that was developed through comprehensive process of animating scenes.”

Even when you’re not driving BB-8 by Sphero, he’s always “looking” around or doing something. At times, the robot shakes with nervous energy. I also noticed that when I really started to drive it around in more open spaces, the drunken demeanor disappeared. When BB-8 goes really fast (there’s even a turbo mode in the app), its head edges forward so it appears as if the robot is aggressively leaning into the run.

When I asked Maigret how the head stayed on and oriented he joked that it was “The Force.” And then added: “We know our customers are going to go and dissect this in every way. I will not steal their moment. So we’re not commenting on exactly how this works.”

He did admit, though, that when designing the BB-8, “The first challenge is the head and how do you get it not only to stay on, but to be a fluid part of BB-8?”

During my test run, BB-8 did crash a couple of times (invariably pilot error) and the head would go flying off. I got a quick look at what’s underneath and noticed two or three tiny and thin wheels. They let the head move and keep it from sitting snug against the surface of the ball, but I’m guessing that a powerful set of magnets (in the ball and in the head) keep the head attached. It’s not clear yet, though, how the BB-8 knows which way the head, which has no sensors in it, is facing.

“I do not want to call it an illusion, but it’s somewhat of an illusion,” Maigret admitted. “It knows which way the head is pointing, but I can also control it.” At one point he controlled the head as I held BB-8 in the palm of my hand (yes, I started petting its head — it’s that cute).

BB-8 by Sphero is also just as fully waterproof as the Sphero-based ball body. As for the thin antennas, they held up well. Sphero reps told me they originally built them rigid, but now they’re flexible filament.

For as much as BB-8 by Sphero can do, a lot of the fun will come from pairing it with the app. The app, for example, lets you play the Star Wars theme as well as all of BB-8’s sound effects. Playing with it with the sound off would be a real Jar Jar Binks move.

The app offers real-time, visual feedback on exactly what BB-8 is doing. It’s also where all the canned animations live. With a tap on the screen, you can have BB-8 by Sphero act out sadness or irritation, or, among other things, trace a simple square on the ground. It also promises to be an adaptive robot, changing its interactions over time (we’ll need to spend a lot more time with BB-8 by Sphero to see if this is true).

Since the BB-8 robot has no microphones or speakers, voice interaction happens through the app. The robot will stop and wait if you begin issuing voice commands. Because the app is upgradeable, Sphero plans on constantly adding new features and engagements.

“We’re operating like a tech company in the toy space,” Maigret explained. And in that world, “We expect devices to get better.”

The app also includes some very clever augmented reality. If you look at BB-8 through your phone and enable it, the little robot will appear to project a hologram from the camera lens on its head. These holograms can be canned animations and voiceovers (there’s one for an X-Wing) or created by the user. At one point I recorded myself through the iPhone’s FaceTime camera greeting BB-8 and then watched it play back as an augmented reality projection that appeared to be coming from BB-8.

As I was playing with BB-8, my Apple Watch buzzed, reminding me of an upcoming meeting and I realized how awesome it would be to be able to control the BB-8 by Sphero with the smart watch. Will there be an Apple Watch app? I asked Maigret. He grinned and answered, “Maybe. Possibly.”

BB-8 by Sphero, which arrives in stores around the world on Friday, is not a cheap droid. It lists for $149.99, which is $20 more than the Sphero 2.0. However, I suspect that Sphero and Disney won’t have any trouble selling these. Once you get over the fact that the robot is kind of small and sometimes wobbly, I think a world of Star Wars fans will be smitten. Sphero’s ambition has long been to put a robot in every house. It may just get its wish.

When it comes to ransomware, you don't always get … END_OF_DOCUMENT_TOKEN_TO_BE_REPLACED

Peyton Carr is a financial advisor to founders, … END_OF_DOCUMENT_TOKEN_TO_BE_REPLACED