You are here: Home / World / Health Risks in Astronauts Caused by Even Less CO2 Than Expected 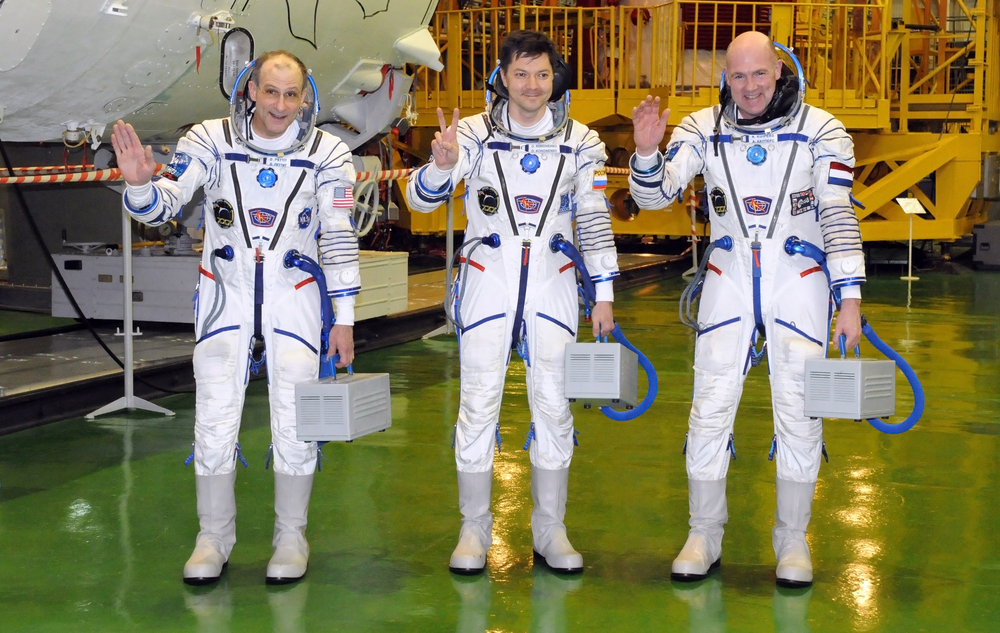 NASA has observed CO2-related health impacts on International Space Station (ISS) astronauts at much lower carbon dioxide levels than expected. In an exclusive interview, Climate Progress spoke to Dr. David J. Alexander of NASA’s Johnson Space Center, the lead ISS crew surgeon for atmospherics, who monitors the impact O2, CO2, and other gases have on astronauts.

In Part 1 of this CP investigative report, I reported on a new study from the Harvard School of Public Health, along with an earlier study from Lawrence Berkeley National Laboratory (LBNL). Those studies found the shocking result that CO2 has a direct and negative impact on human cognition and decision-making in the 900 to 1000 ppm range and very possibly at lower levels.

These are levels most Americans and their children are routinely exposed to today inside classrooms, offices, homes, planes, and cars — and that will be increasingly difficult to avoid if we don’t succeed in slowing and then stopping the rise of CO2 levels outdoors, which serve as the baseline for CO2 levels indoors.

As noted in that post, Dr. Alexander told me he is very familiar with the original study, and “based on our review of the study and the literature combined with our own experience, it seems like a very credible piece of work.” In this post, I’ll examine what NASA has learned from over a decade of observing ISS astronauts respond to the varying concentrations of CO2 over time on the ISS astronauts. This includes a mechanism by which CO2 levels could affect the brain, and the unexpected finding that for each roughly 1300 ppm increase in CO2 levels, “the odds of a crew member reporting a headache doubled”: 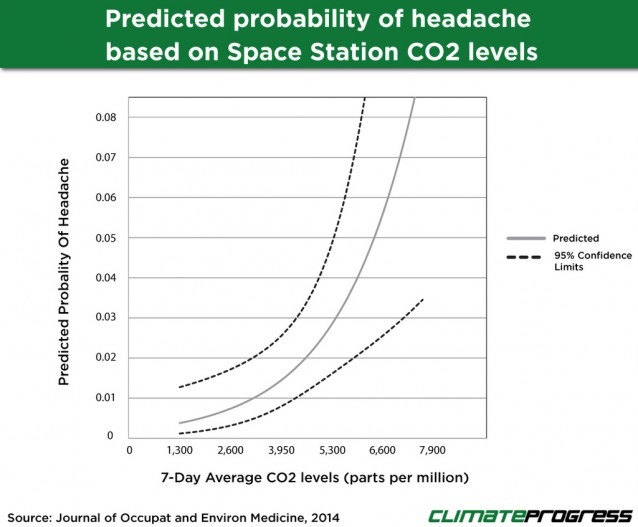 To understand the implications of what NASA found, I spoke to Dr. Alexander and reviewed a number of studies he coauthored. These include a 2012 NASA study, “Chronic Exposure to Moderately Elevated CO2 during Long-Duration Space Flight” and the 2014 journal article, “Relationship Between Carbon Dioxide Levels and Reported Headaches on the International Space Station,” published in the Journal of Occupational and Environmental Medicine (JOEM).

Why astronaut headaches matter to NASA

The 2014 study explains why even a 0.01 probability — a one percent chance — of a headache is not too small to matter to NASA: “Although the incidence is not high, the concern of the space medical community is that headaches may be an indicator of underlying increased intracranial pressure” from the combination of a CO2-induced increase in cerebral blood flow [CBF] and the effects of microgravity on blood flow. The result: “The increase in CBF results in an elevation of intracranial pressure, presumably leading to headache, visual disturbance, impaired mental function, and other central nervous system symptoms.”

Significantly, these impacts on astronauts on the ISS do not directly translate to impacts on a typical person on Earth. On the one hand, “microgravity increases sensitivity to CO2,” as Dr. Alexander explained to Climate Progress. On the other hand, astronauts are healthier and more fit than the general population, and, as the 2014 JOEM article put it, “Notably, astronauts are screened during selection for underlying cardiovascular and neurovascular conditions that may predispose to headaches.”

This is key reason Alexander and NASA are currently working with some of the researchers from the terrestrial studies on a specific study to look at the impact of low to moderate CO2 levels on judgment and decision-making for the astronaut cohort, with its unique physical profile and training.

Dr. Alexander explained that anecdotal changes include not just lethargy, but also “not following procedures.”

The 2012 study notes that “out of operational necessity, space platforms function with ambient carbon dioxide (CO2) concentrations in excess of normal atmospheric conditions.” The long-duration Spacecraft Maximum Allowable Concentration [SMAC] used by NASA for CO2 is 7000 ppm (0.7%) because “Extensive terrestrial studies support this level as safe and unlikely to cause adverse effects.”

The EPA did an extensive literature review for its 2000 report, “Carbon dioxide as a fire suppressant: examining the risks” (which is cited by the 2012 NASA study). The EPA review found “headache, dyspnea [labored breathing] upon mild exertion,” at 20,000 ppm, and no reported physiological symptoms at levels substantially below that level. The EPA cites a 1990 Compressed Gas Association table indicating that the “physiological tolerance time” for healthy males CO2 levels with a “maximum exposure limit” of 10,000 ppm and 5,000 ppm is “indefinite.” The ISS ended up selecting “operating CO2 concentrations consistent with the 1996 SMAC limits” of 7,000 ppm for engineering and design reasons.

What NASA researchers found with actual astronauts on the International Space Station (ISS), however, surprised them. ISS “crews routinely report symptoms of acute CO2 toxicity (e.g., headaches, lethargy) that correlated with relative elevations of cabin CO2 below the permissible level.” The 2012 study notes:

Dr. Alexander explained that anecdotal changes include not just lethargy, but also “not following procedures.” Naturally, NASA has continued to pursue research in this area, since decision-making can be a life-or-death matter for astronauts.

He said there is a “strong suspicion the observed symptoms were CO2 induced,” and that more recent studies are “driving toward that conclusion.” The recent research from LBNL and Harvard “would further bolster” that conclusion.

The more recent studies include the 2014 JOEM paper, which analyzed data on the American, Canadian, European, and Japanese astronauts “who completed an ISS mission between March 14, 2001, and May 31, 2012.” NASA keeps uniquely detailed records of any reported headache by an ISS astronaut.

That analysis found that “For each 1-mm Hg increase in CO2” – roughly each 1316 ppm increase in CO2 levels — “the odds of a crew member reporting a headache doubled.” The article notes, “These levels were previously thought to not cause detrimental physiological effects but on the basis of the current analysis the higher CO2 levels present on the ISS have a statistically significant association with the incidence of reported headaches in a healthy astronaut cohort.”

The mechanism by which CO2 levels could affect the brain

I discussed with Dr. Alexander what the mechanism might be for CO2 affecting brain functionality. The EPA study notes that an increase in CO2 in inhaled air “dramatically influences the function of major vital processes, including control of breathing, vascular dilation or constriction (particularly in certain brain tissues), and body fluid pH.” As the fraction of CO2 in one’s inhaled air increases, the body continually compensates to keep blood pH at a narrow range (to avoid acidosis).

The 2012 NASA study points out that “CO2 is a potent vasodilator of cerebral blood vessels” — it speeds up cerebral blood flow. At the same time “The blood brain barrier is highly permeable to CO2 and is susceptible to acid/base shifts associated with CO2 exposure.” Thus exposure to CO2 can increase cerebral blood flow (which can increase intracranial pressure) and the pH of the cerebral spinal fluid is affected. The study explains:

Cerebral blood flow (CBF) was monitored by Silwka (1998) in 0.7% [7,000 ppm] and 1.2% [12,000 ppm] CO2 environments over 23 days. On days 1-3, there was a 35% increase in cerebral blood flow as measured at the middle cerebral artery. After day 3, the blood flow steadily decreased to about 12 to 15% above pre-exposure levels…. Unexpectedly, CBF did not return to baseline after return to ambient CO2 levels remaining elevated through the end of evaluation period, 2 weeks post-exposure. He was unable to explain this persistence of increased CBF post-exposure.

As the 2014 JOEM article explains, higher CBF raises intracranial pressure, “presumably leading to headache, visual disturbance, impaired mental function, and other central nervous system symptoms.” The 2012 study points out, ultimately, that “the physiology of increased CO2 concentrations on the brain and its related structures is unknown.” Considerably more research is needed to understand what the lower threshold is for CO2 impacts on human decision-making for various populations — and what the specific mechanism or mechanisms are for those impacts. NASA is one of many places pursuing that research.

Parts 1 and 2 have shown how CO2 can directly impact cognitive function and the brain in a variety of settings at far lower levels than previously thought. Part 3 will explore what that means in one of the most important of settings — school classrooms.

When it comes to ransomware, you don't always get … END_OF_DOCUMENT_TOKEN_TO_BE_REPLACED

Peyton Carr is a financial advisor to founders, … END_OF_DOCUMENT_TOKEN_TO_BE_REPLACED