You are here: Home / World / Hillary Clinton Seeks to Connect With Iowans, but Celebrity Gets in Way 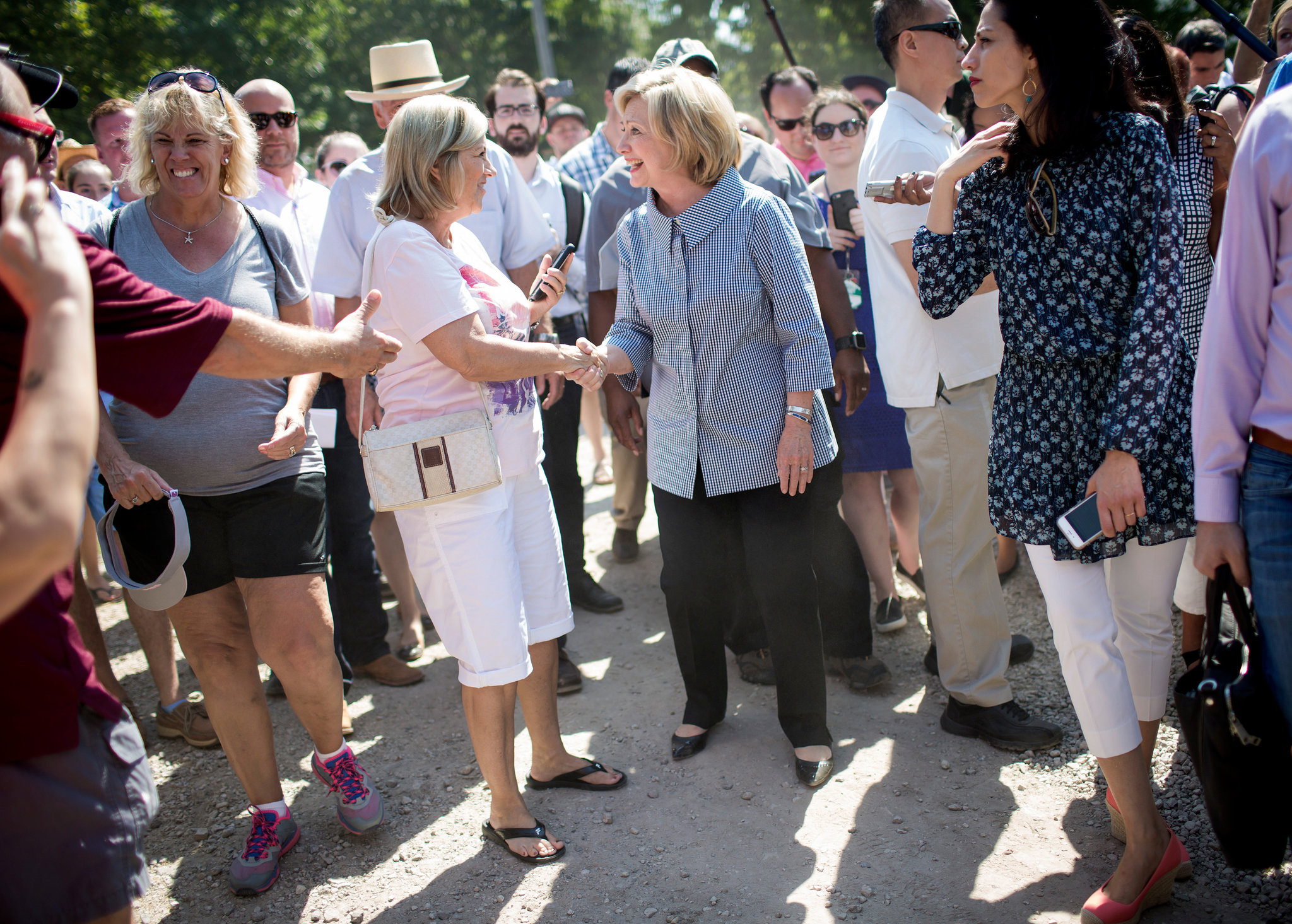 On a sunny Saturday afternoon at the Iowa State Fair, Tom Harkin, a former senator and a popular political figure here, reaffirmed his support for his “great friend for almost 25 years,” Hillary Rodham Clinton, declaring that he and Mrs. Clinton “have the same type of values.”

It was a crucial endorsement that had eluded Mrs. Clinton in her 2008 presidential campaign, when Mr. Harkin stayed publicly neutral while Barack Obama’s candidacy gained strength in this important early nominating state.

But speaking with reporters after he praised Mrs. Clinton’s record, Mr. Harkin signaled what may have secured his early endorsement this time.

“I’m going to be frank — I never said this to Hillary,” he said. “I thought certain mistakes were made in 2008.” But he added that Mrs. Clinton’s 2016 campaign in Iowa was “doing everything right.”

Mrs. Clinton smiled as she stood next to Mr. Harkin in front of a barn on the sprawling fairgrounds here. “She just needs to come out and meet Iowans, and the rest will fall into place,” he said.

Mrs. Clinton, accompanied by a dozen Secret Service agents, state troopers and staff members, as well as a horde of reporters, photographers and videographers, then tried to do just that.

Iowans could hardly get close enough to take photographs of the former secretary of state, much less talk to her. “What did she say? We couldn’t hear a word!” a woman with an H (for Hillary) campaign button shouted after Mr. Harkin’s remarks.

Mrs. Clinton and her campaign have tried assiduously to overcome the public perception that she is aloof and unapproachable, attributes that plagued her candidacy in 2008, when she spent lavishly to win the caucuses but shunned the type of retail-style politicking that Iowans demand.

The challenge for Mrs. Clinton today is that she cannot entirely shed the layers of staff and security — and the news media mob — that come with being Hillary Rodham Clinton.

It does not help that she is often compared with her husband, former President Bill Clinton, who was known for his ability to connect with voters, and who has the capacity to upstage the former first lady at joint appearances.

In September, at Mr. Harkin’s annual steak fry in Indianola, Iowa, Mr. Clinton held court with reporters and delivered a lengthy speech, stealing some attention from his wife. (Mr. Harkin did not help, announcing Mr. Clinton after Mrs. Clinton by saying, “We saved the best for last, didn’t we folks?”)

And while Mrs. Clinton can be warm and engaging when interacting with voters, she appears more comfortable when reciting policy proposals and data points than when she makes small talk, which her husband is known to be good at.

“A lot of Americans don’t appreciate how innovative and forward-looking this country’s farmers are,” Mrs. Clinton said when she and Mr. Harkin toured the Agriculture Building at the fair, where prizewinning stalks of corn and potatoes were on display.

While being told about a program in which farmers help fight hunger, Mrs. Clinton listened attentively and nodded approvingly. “We had something like that in Arkansas,” she said.

As Mrs. Clinton went along the route that had been mapped out for her at the fair, she posed for 42 pictures. She raved about being a grandmother (“It’s the best!”), examined a Monopoly-themed sculpture made of butter (“I love it!”), asked if Iowa had any zoning programs to help out small farms (it does) and gave an evasive “Sounds good!” to a fairgoer who asked if she would attend a tailgate party sponsored by the Iowa Corn Growers Association.

All the while, Mrs. Clinton’s celebrity had a way of encroaching on her efforts to show she can be just like everybody else. Only the reality TV star-turned-Republican candidate Donald J. Trump attracted more attention.

And after touring the fairgrounds in the slow-moving scrum composed of the news media, staff members and security personnel, Mrs. Clinton, holding a pork chop on a stick and a giant lemonade, climbed into a sport utility vehicle that took her to a private plane destined for Martha’s Vineyard off Massachusetts.

“I don’t like the monarchy we create,” Robert Mason, a 36-year-old graphic designer, said of Mrs. Clinton.

But perhaps the biggest impediments to Mrs. Clinton’s efforts to meet and greet potential caucusgoers and to hear what is on their minds are the persistent questions about her exclusive use of a private email account during her time as secretary of state.

At almost each stop of her campaign through Iowa this weekend, Mrs. Clinton was asked about the latest developments in the controversy. She addressed questions about the emails with a joke during an appearance at Friday night’s Wing Ding Dinner in Clear Lake, Iowa, an annual Democratic fund-raiser. “You may have seen recently that I launched a Snapchat account,” she said. “I love it. Those messages disappear all by themselves.”

Mrs. Clinton says that average Americans care about who will help the middle class, not about what she says is a politically motivated congressional investigation. But Cathleen Nelson, a 21-year-old studying early childhood development, was wary. “She knows all the sneaky ways,” she said of Mrs. Clinton.

Among likely Democratic caucusgoers in Iowa, Mrs. Clinton currently leads her closest rival, Senator Bernie Sanders of Vermont, by 19 percentage points, according to a CNN/ORC poll released last week. But her advisers have expressed concern that Mr. Sanders, whose populist message is helping him draw large crowds, could gain support and even potentially defeat Mrs. Clinton in Iowa, the first nominating state.

Showing concern about Iowa is a means for Mrs. Clinton’s campaign to set expectations. But on the ground here, there is also the feeling that her current showing in the opinion polls could, if Mrs. Clinton does not pay close attention to Iowa, easily erode.

“I know she’s the presumed front-runner,” Hilary Hamilton, 28, said on Friday just before Mrs. Clinton took the stage at the Clear Lake dinner. “But in Iowa, on the grass-roots level, Hillary isn’t really connecting.”

Democrats in Iowa tend to shun establishment candidates, which has given Mr. Sanders a lift here and poses another obstacle for Mrs. Clinton, as it did in 2008.

She delivered one of her most impassioned speeches at Friday’s dinner, peppering her remarks with liberal lines that tend to draw applause and with pointed attacks on her potential Republican rivals.

After her speech, Mrs. Clinton vanished behind a curtain as Secret Service agents kept voters at bay. Backstage, she posed for a photograph with a heaping pile of chicken wings. An aide declined to say whether the candidate had eaten any.

When it comes to ransomware, you don't always get … END_OF_DOCUMENT_TOKEN_TO_BE_REPLACED

Peyton Carr is a financial advisor to founders, … END_OF_DOCUMENT_TOKEN_TO_BE_REPLACED