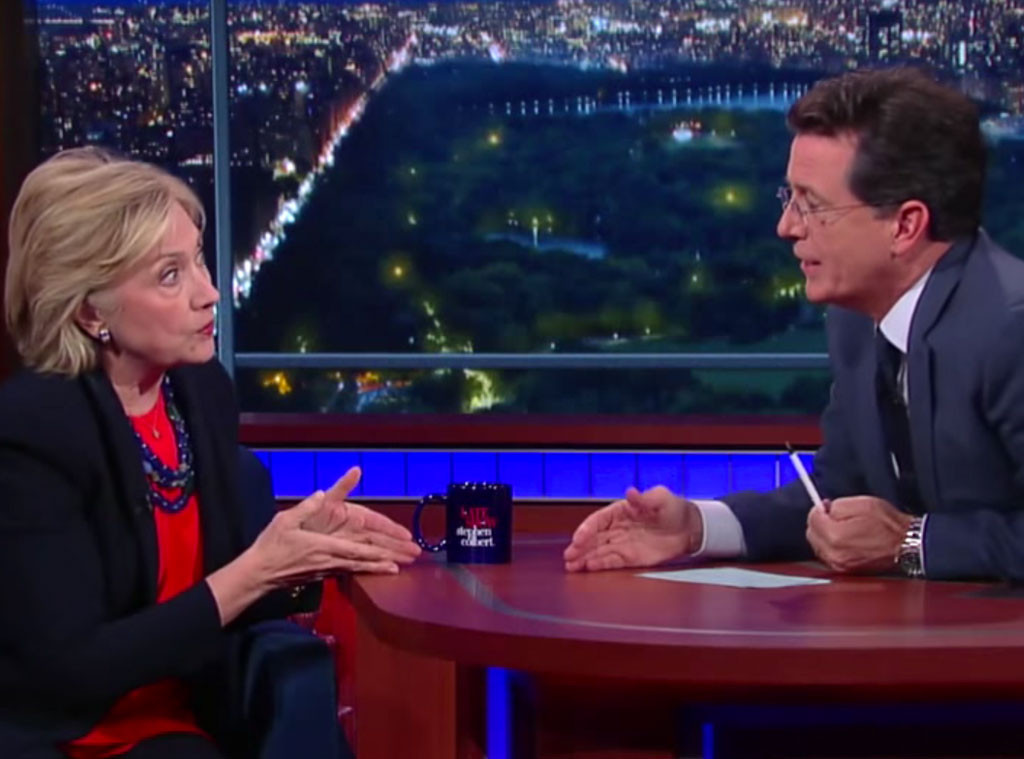 Hillary Clinton put the moves on Stephen Colbert Tuesday night. The presidential hopeful stopped by The Late Show to talk about her campaign, life at home and why she wants to be the leader of the U.S. all while somehow managing to get a little flirty with the late-night talk show host.

While recalling the successes of husband’s Bill Clinton’s presidency, Colbert noted that if the country went back in time to that era, everyone would have to deal with reliving the ’90s, which includes parachute pants, “Getting’ Jiggy With It” and more questionable fashion choices.

When she wasn’t being a little coquettish with the host, she talked to him about her and Bill’s TV habits—yes, they’re just like us. They binge watch shows, too.

“We finally finished House of Cards,” she revealed. “It took a while.”

She also revealed that she’s a fan of Madame Secretary and The Good Wife, but admitted to getting “a little” jealous when she saw former Secretary of State Madeleine Albright make a cameo on the former CBS series. Luckily for Hillary, the former Colbert Report host has some connections.

“I know people over there,” he joked, referring to his current job at CBS.

Although she had some fun joking around with Colbert, Hillary also became serious for a moment or two to discuss why she wants to be president. She confessed that it’s a lot of hard work running a campaign but the majority of the time she knows it’s worth it.

“Most days something happens during the day that really makes you feel like, ‘Yes, I know why I’m doing this.’ I’m so committed, and it’s because somebody said something to me.”

She then discussed her plans for financial reform and what she intended to do to fix the economy, all while taking jabs at some of her opponents.”I love it when you have Republicans on here and they act like we all have amnesia,” she told Colbert of the economic crisis, which she described as the worst one “since the Great Depression.”But when Colbert suggested that some citizens might be concerned that she’ll just be an extension of her husband, she refuted.

When it comes to ransomware, you don't always get … END_OF_DOCUMENT_TOKEN_TO_BE_REPLACED

Peyton Carr is a financial advisor to founders, … END_OF_DOCUMENT_TOKEN_TO_BE_REPLACED