You are here: Home / Weather / How 15 Years Of Drought Has Changed Lake Powell, In One GIF 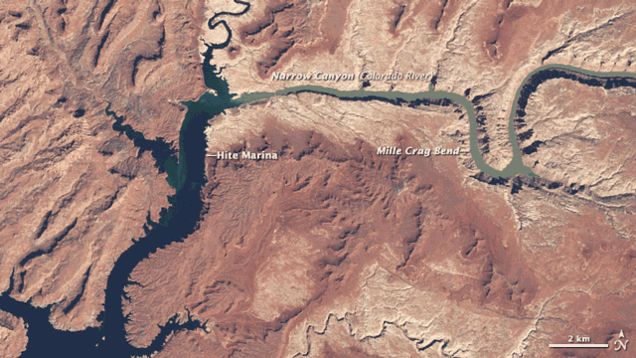 The 21st century has not been kind to the water levels in Lake Powell, a meandering reservoir that straddles the border between Arizona and Utah. This series of images, taken by NASA’s Landsat satellites from 1999 to 2015, document the change.

The change that’s occurred in 15 years is astounding. In that time, the reservoir has gone from healthy and blue, down to a sickly shadow of its former self, back up to 42 percent capacity in April this year:

At the beginning of the series in 1999, water levels in Lake Powell were relatively high, and the water was a clear, dark blue. The sediment-filled Colorado River appeared green-brown. In the early years of this image series, water levels began to drop. The declines were first apparent in the side canyons feeding the reservoir which thinned and then shortened. By 2002, the lake level had dropped far enough that the exposed canyon walls created a pale outline around the lake.

Lake Powell’s water levels plummeted in early 2005, according to the U.S. Department of the Interior Bureau of Reclamation. The northwestern side branch of Lake Powell remained cut off from the rest of the reservoir. In the main body of Lake Powell, water pooled along its eastern edge, while large expanses of dry canyon floor were visible in the west.

In the latter half of the decade, the drought eased somewhat. Precipitation was better, but still slightly below normal in the Upper Colorado River Basin. The lake level began to rebound; only the 2008 image appeared to deviate from the trend toward rising water levels. While the lake was significantly higher in 2011 and 2012 than in 2005, a careful comparison of the side canyons reveals that the level was still not back to 1999 levels, when the lake was near full capacity.

Source: io9 How 15 Years Of Drought Has Changed Lake Powell, In One GIF  |  Image credit: NASA

When it comes to ransomware, you don't always get … END_OF_DOCUMENT_TOKEN_TO_BE_REPLACED

Peyton Carr is a financial advisor to founders, … END_OF_DOCUMENT_TOKEN_TO_BE_REPLACED