You are here: Home / Technology / HTC One A9 Is Like an iPhone 6S With Android 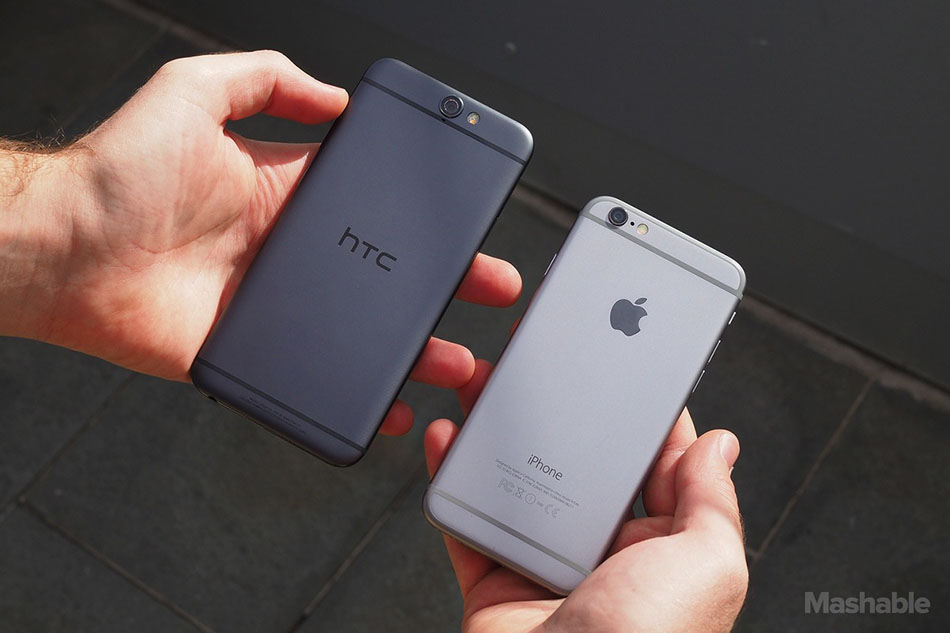 If you can’t beat ’em, copy ’em. Copy the hell out of ’em. Whether HTC likes it or not, people will look at its new One A9 smartphone and come to the same conclusion: It looks like an iPhone 6S.

And that’s just not the kind of attention you want when you’re a company that desperately needs a hit product, after dropping the ball on your flagship phone.

The One A9 isn’t going to reverse the Taiwanese smartphone maker’s financial woes, but it could slow down the bleeding by attracting Android fans who envy the iPhone 6S’s industrial design, but could never live with iOS.

When I asked Nigel Newby-House, HTC’s executive director of North America strategy & planning, if the One A9 was basically an iPhone running Android, he eventually relented and said “yes.”

It’s easy to be dismissive and just state the obvious — that the One A9 is a blatant iPhone 6S clone — but the truth is design matters even more than specs these days. Call it a copy all you want, but there’s only so many ways to design an aluminum rectangle with a screen on it.

“The One A9 is the perfect convergence of the Desire and One series,” Katherine Kim, the phone’s lead designer, explained to me.

The One A9 is larger than the iPhone 6S and has 5-inch AMOLED display with 1,920 x 1,080 (full HD) resolution. In my quick hands-on with the phone, I noticed the screen was rather dim even at full brightness and very hard to view outdoors.

The construction looks and feels very much like an iPhone 6S. The glass display curves and melts into the side of the phone. I like how the aluminum back is sand-blasted to give it an extra grippy feel.

The HTC One A9 packs a Qualcomm Snapdragon 615 octa-core processor, 3GB of RAM and 32GB of storage (expandable via microSD card).

The phone also has a 2,150 milliamp-hour battery and supports QuickCharge 3.0, which, in theory, means you’ll be able to recharge it from 0 to 80% in about 35 minutes.

On the back, you’ll find a 13-megapixel camera with optical image stabilization, and on the front a 4-megapixel UltraPixel selfie camera. Both cameras took shots quickly, but I found the image quality to be very average.

The phone’s specs don’t scream in any way, but if the demo unit I tried was anywhere close to the final production model, it may not matter. Android 6.0 Marshmallow with HTC’s Sense flies, and the operating system felt very responsive and zippy, despite the lack of a top-of-the-line processor.

The phone’s UI is still designed by HTC, but the company says it’s toning down on the tweaks and customizations that don’t really add up to a better experience.

Noticeably missing from the One A9 is HTC’s signature front-facing BoomSound stereo speakers. Sound is still important to the company’s phones; the One A9 has Dolby Surround Sound and a dedicated amp to play 24-bit songs. Don’t have 24-bit songs? No problem — the phone can upscale any 16-bit song to the higher bitrate. I didn’t get to listen to any tunes, so I can’t tell you how it sounds.

In the U.S., the One A9 will replace the One M9 as HTC’s flagship smartphone. It’ll be available on all of the major carriers with pre-orders starting today for $399.99 unlocked (limited time).

You can call the iPhone 6S shameless, but this is what peak metal smartphones look like: Thin unibody metal body with soft round edges, micro-drilled speaker grills and unsightly antenna bands on the backside. Mark my words, this is only the beginning of the cloning.

When it comes to ransomware, you don't always get … END_OF_DOCUMENT_TOKEN_TO_BE_REPLACED

Peyton Carr is a financial advisor to founders, … END_OF_DOCUMENT_TOKEN_TO_BE_REPLACED