You are here: Home / Entertainment / Hunger Games: Mockingjay Part 2 Will Be Epic 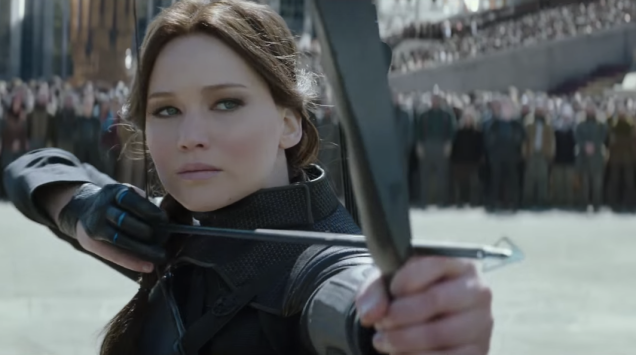 The cast and crew of The Hunger Games visited Hall H at Comic-Con for the final time Thursday afternoon to promote the final film in the franchise, Mockingjay Part 2. It was highlighted by a brand new trailer whose action was simply beyond epic.

The panel began with four people in white outfits coming onto the stage. They unveiled some drums and started banging them, and then a drumline entered in from the back. The dramatic drumming continued and got louder, louder, building the tension until then the video screen turned on: A Message from District 13. The people in the video were dressed in the same white outfits, all acting in unison. Just then, a person begins walking in from the back. It’s Katniss in a full, red outfit that looks like armor. “Freedom is worth fighting for. Stand With Us” the video said.

Moderator Conan O’Brien next hit the stage: “I am not in the Hunger Games films, I know you are disappointed.” But Willow Shields, Liam Hemsworth, Josh Hutcherson and Jennifer Lawrence are in the movie and took the stage; they were joined by director Francis Lawrence and producer Nina Jacobson.

Jacobson said they want to deliver for the fans who delivered for them and make an emotional film that’s “satisfying to the core.”

They decided to show the first full trailer, which they said wouldn’t be online for a little bit (sorry). It starts with the Capitol in smoke. There are lots of sweeping vistas—it’s huge scope, setting up an epic showdown between Snow and Katinss. “The game is coming to its end,” Snow says. The District 13 people say: “Our future starts tomorrow at dawn. We march together into the Capitol.”

The characters explain that, because of the invasion, Snow has booby-trapped the entire city to make it into a big, huge, almost new Hunger Games itself. “Sadistic inventions designed to make sport of our death.”

Katniss shoots an arrow down the street and all this fire and stuff pops out. “Welcome to the seventy-sixth Hunger Games,” Finnick jokes. Katniss is shown leading a huge mass of people down the middle of the capital, the same place they came in in the first two movies. “We’ve got one shot—lets make it count,” Gale saya. Then we get a huge montage of action: Buildings falling, lots of fighting, arrows shooting, guns firing out of walls, weird mutants in the sewers. As this is happening, Peeta says “Our lives were never ours, they belonged to Snow. If you kill him Katniss, you end all of this. All of those deaths will mean something.” The action beats continue, falling oil, crazy things jumping out, then Katniss says “Turn your weapons to the capital. Turn your weapons to Snow.”

“I feel like there doesn’t even have to be a movie now,” O’Brien said. “Show that four times in the theater.”
The trailer basically just sells a huge, huge action movie—which the director reiterated is exactly what he wanted. He called it a “real battle” movie and to shoot it, filming moved from Atlanta to Europe.

From there, the panel turned to Twitter questions, most of which were kind of goofy. Liam Hemsworth called Peeta “Peter,” Jennifer Lawrence used the tablecloth to wipe her nose, and Hemsworth and Hutcherson joked they have a kiss in the movie.

Talk turned to the final day of principal photography, and a scene between Lawrence and Woody Harrelson. Hutcherson and Hemsworth had already wrapped, but they came back to see it filmed, and of course things got emotional. “That night we held each other and slept like puppies,” Jennifer Lawrence joked.

One of the better questions was if Hemsworth met Gale, what would he say? And in a bit of a spoiler, he joked, “It’s all right, mate, they’re plenty of fish in the sea.”

Speaking of spoilers, seemingly all the audience questions were about an epilogue shot a few months after the shoot officially ended, as well as material the film may have added to bridge between the time between the climax and the aforementioned epilogue. Jennifer Lawrence said they shot the latter in the same field where they shot the first scene, and then the director added, “There will be some differences that we made to the books. If you love the end of the books, you’ll love the end of the movie.” One of the challenges of it all, according to Jacobson, was to keep Katniss’s character aware of what’s happening in the world. She’s dealing with “the consequences of war and violence,” Francis Lawrence said.

To conclude, Jennifer Lawrence was asked how she said goodbye to Katniss Everdeen. “I don’t really fell like [the end] has happened yet,” she said. “It’s such a huge part of my life. These movies changed my life. I don’t think I’ll ever say goodbye, Katniss is a part of me.”

Source: io9 Hunger Games: Mockingjay Part 2 Will Be an Action Epic for the Ages

When it comes to ransomware, you don't always get … END_OF_DOCUMENT_TOKEN_TO_BE_REPLACED

Peyton Carr is a financial advisor to founders, … END_OF_DOCUMENT_TOKEN_TO_BE_REPLACED