You are here: Home / Entertainment / Insidious 3 Offers A Textbook Lesson In How To Kill A Horror Franchise 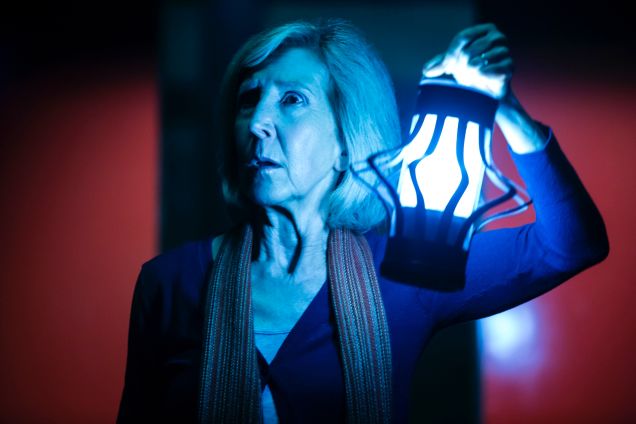 Insidious and its sequel were enjoyably frightening tales of a family haunted by parasitic spirits — and the medium, Elise (Lin Shaye), who sets them free. Insidious: Chapter 3 introduces a new ghostly dilemma, then pastes Elise into the narrative — like an afterthought, who also happens to carry the entire story. Some spoilers follow.

“A few years before the Lambert haunting,” our story begins. (So, no Rose Byrne in this one, alas.) Recently widowed, Elise rarely changes out of her bathrobe, much less leaves her house, when she’s paid a visit by sad, sweet-faced teenager Quinn Brenner (Stefanie Scott). Quinn’s beloved mother died a year or so ago, and the girl — trying to figure out life post-high school, and how to deal with her harried, still-grieving father (Dermot Mulroney) — is hoping to speak with her. Elise insists she doesn’t do readings anymore, but she’s sympathetic to Quinn’s plight, and invites her in anyway.

A conversation about Quinn’s mother soon turns into an impromptu reading, which takes such a sinister turn that any sane person would’ve heeded Elise’s advice not to keep trying to reach Mom from beyond the grave, especially since “If you call out to one of the dead, all of them can hear you.” Even, like, the ones who are really bad at being dead. Duly noted, by everyone except Quinn, who persists in whispering into the distressingly responsive air vent above her bed in the vintage apartment building where she lives with Dad and her little brother, Alex (Tate Berney).

But before any more spooky stuff happens, we’re treated to a scene in which Quinn snaps a photo of her breakfast “for my blog,” which is never mentioned again. Oh, and she’s an aspiring actress, in a subplot that also goes absolutely nowhere when she’s mowed over by a car right after blowing a huge audition.

And with that, Insidious 3 finally unfurls a few frights. With two broken legs, Quinn can’t do much except hang out in her room. Confinement would be scary enough, but said room is quite clearly haunted by an entity that had the girl in its sights even before the accident briefly caused her to flatline.

The Brenners’ apartment building (a looming, musty hulk that’s more working-class than Rosemary’s Baby and less ornate than Inferno, but no less chockablock with bad vibes) thereafter becomes the film’s main setting, aside from a few forays into Elise’s gloomy Craftsman abode, and it’s here that the villain begins to take hold. While the previous films had the Bride in Black (who makes a significant cameo here) and the Lipstick-Face Demon (actual character name), part three gives us “The Man Who Can’t Breathe,” a rotting corpse in a hospital gown whose bag of tricks include looming in the shadows breathing like Darth Vader, and leaving mucky footprints everywhere he treads. (Not very stealth, guy.)

Whatever. The main problem with this adversary is that he’s just as blah as his prey. The first Insidious started off like a haunted-house movie before detouring into an actually quite original tale about a father and son whose remote-viewing talents attracted unwanted attention from the spirit world. This carried into part two, which further explored the malevolent ghosts’ origins. Part three, though, is a weak expansion of the Insidious cinematic universe, in which an otherwise average girl is singled out by a demon because she tried to make contact with her dead mother.

We do, of course, get to meet younger versions of comic-relief ghostbusters Tucker (Angus Sampson) and Specs (Leigh Whannell). Whannell, who’s written all the Insidious movies, gets his directorial debut here, now that James Wan is off making movies like Furious 7. It makes sense that Whannell would take a crack at part three given his history with the series, and we get plenty of effective, atmospheric shots of dark hallways, the misty netherworld, etc.

But maybe he should have kept Tucker and Specs out of this one; when they bumble into the action, hired off the internet by Quinn’s father at the suggestion of her little brother (literally the only reason there is a little brother character in the movie is so that he can make this suggestion), whatever scary momentum the film has built up screeches to a halt so that Tucker can eat a cupcake.

But nobody can save the Brenners except tiny-yet-tough Elise, who agrees to help them even though it will put her own life at risk. (I lost track of how many times throughout the film Elise says she’s through with using her gift … then she uses it anyway … and then something terrible happens … and repeat.)

If you’ve seen the first film — and there’s no reason to go see Insidious 3 if you haven’t — you know exactly when Elise loses her life. And it ain’t gonna be while she’s poking around in “the Further” on behalf of Quinn. With stakes as low as these, it’s odd that the script continues to emphasize the peril that Elise is in every time she goes into a trance.

Insidious 3 might’ve been a more successful movie if it had given the Brenners a pass and kept the focus entirely on Elise. Shaye is the best thing about the film, and there’s real poignancy in her struggle to cope with her husband’s decision to take his own life, especially given her unique line of work. Instead, we get all the non-Lambert characters from the first two films (even old Carl shows up for a quick minute) shoehorned into a tale that puts an uninteresting teen at its center, probably because that’s the main demographic buying tickets to these movies, and hinges all its horror-movie mojo on predictable jump scares.

Source: io9 Insidious 3 Offers A Textbook Lesson In How To Kill A Horror Franchise

When it comes to ransomware, you don't always get … END_OF_DOCUMENT_TOKEN_TO_BE_REPLACED

Peyton Carr is a financial advisor to founders, … END_OF_DOCUMENT_TOKEN_TO_BE_REPLACED