You are here: Home / Entertainment / Interstellar Should Be Shown in Science Class, Say Physicists 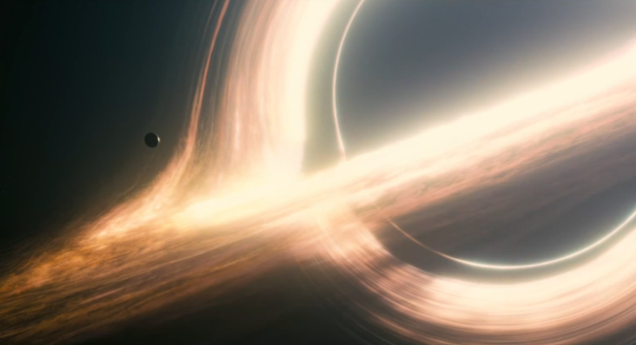 Christopher Nolan’s Interstellar broke new ground in its scientifically accurate portrayal of black holes and wormholes. A scientific journal is now urging educators to feature the film in their classes when teaching such topics as general relativity.

Inspired by such films as 2001: A Space Odyssey and Carl Sagan’s Contact, director Christopher Nolan sought to create a film that, when it came to the physics, was driven more by science than fiction. The ensuing portrayal of black holes and wormholes was not only visually stunning, it also resulted in scientific papers published in the American Journal of Physics and in Classical and Quantum Gravity.

As the BBC is now reporting, some of the scientists involved in the project are lauding the film as an excellent way to teach difficult concepts in physics.

“The physics has been very carefully reviewed by experts and found to be accurate,” noted American Journal of Physics editor David Jackson to the BBC. “The publication will encourage physics teachers to show the film in their classes to get across ideas about general relativity.”

According to one of the two new AJP papers, Interstellar “offers a variety of opportunities for students in elementary courses on general relativity theory.” The film, in addition to motivating students, offers a wealth of insight into such topics as general relativity, gravitational lensing, optics, and computer modeling.

“Right from the beginning we all really believed it’s time to inspire another generation to really look outwards and to look to the stars again,” noted Christopher Nolan to the BBC. “We hoped that by dramatising science and making it something that could be entertaining for kids we might inspire some of the astronauts of tomorrow — that would be the ultimate goal of the project.”
Awesome, but here’s to hoping the science teachers who screen Interstellar make an effort to call out the movie’s pseudoscientific tendencies and glaring plot holes.

When it comes to ransomware, you don't always get … END_OF_DOCUMENT_TOKEN_TO_BE_REPLACED

Peyton Carr is a financial advisor to founders, … END_OF_DOCUMENT_TOKEN_TO_BE_REPLACED