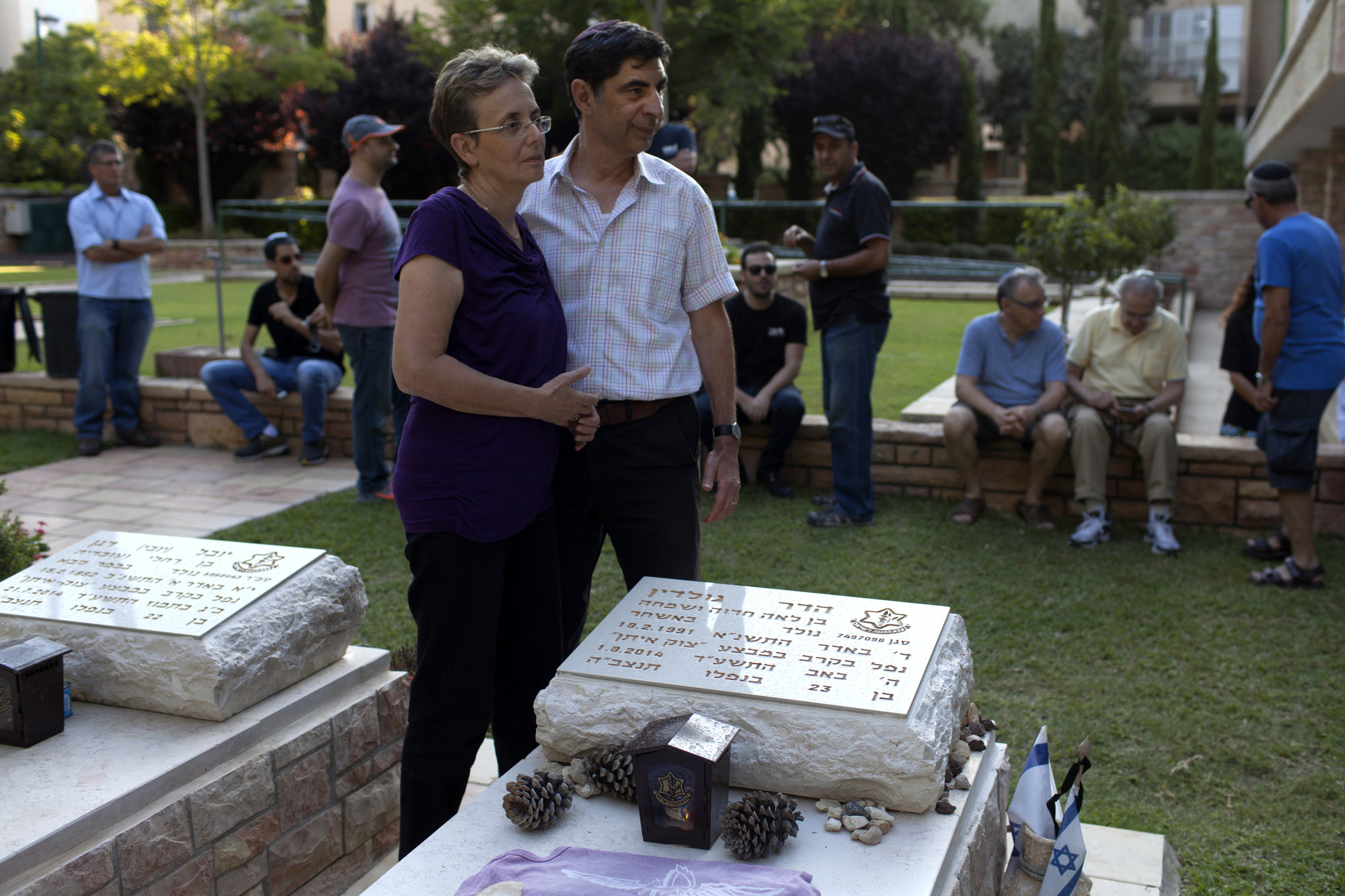 It took Second Lt. Hadar Goldin’s comrades a few minutes to discover that he was missing after a burst of gunfire on the outskirts of Rafah, in southern Gaza, pierced a painstakingly negotiated truce that was barely an hour old.

The small Israeli force that rushed to the scene apparently soon realized that the body lying on the ground, alongside two dead Israeli soldiers, was that of a Hamas militant. The Israelis had been ambushed, and Lieutenant Goldin, 23, had been dragged down into a tunnel from which the militants had emerged.

The capture of Lieutenant Goldin set off one of the deadliest and most disputed episodes of last summer’s 50-day war in the Gaza Strip. The events of Aug. 1, 2014, now called Black Friday by many, are still reverberating and remain the focus of international scrutiny a year later.

At least 135 Palestinians were said to have been killed, mostly in the first hours after Lieutenant Goldin was abducted, as Israeli forces unleashed a barrage of artillery and airstrikes meant to prevent the militants from escaping with him deeper into the Palestinian coastal territory.

That assault struck heavily populated parts of Rafah, where the streets were filled with Palestinian residents, as they tried to return home after receiving word of the temporary cease-fire and then as they fled.

In a report released on Wednesday by Amnesty International, the latest in a series of inquiries into possible violations of international law by both Israel and Hamas during the fighting, the London-based group said there was “strong evidence” that Israel had carried out war crimes, and possibly crimes against humanity, in Rafah.

Philip Luther, the director of Amnesty’s Middle East and North Africa program, pointed to what he called Israel’s “relentless and massive bombardment of residential areas of Rafah in order to foil the capture of Lt. Hadar Goldin, displaying a shocking disregard for civilian lives.” In a statement, Mr. Luther accused Israel of carrying out “a series of disproportionate or otherwise indiscriminate attacks” — charges vehemently rejected by Israel.

Examining Israel’s Response to the Kidnapping of a Soldier

A report by Amnesty International accused Israel of war crimes in the attacks following the capture of a soldier during the war last year. Israeli forces destroyed large parts of the al-Tannur neighborhood, in Rafah, after Lieutenant Hadar Goldin was dragged into a tunnel by Hamas militants on Aug. 1, 2014. At least 135 people were killed in the area in the four days after the soldier was captured, according to the report.

Based on items recovered by the soldiers who initially entered the tunnel in hot pursuit, the Israeli authorities determined a day later that Lieutenant Goldin would not have survived the initial ambush and that he had been killed in action. The bombardment of Rafah continued, albeit with less intensity, for two more days.

A burial of sorts was held in the military cemetery in Kfar Saba, a northern suburb of Tel Aviv, half a block from the Goldin family’s apartment. But the young soldier’s body was never returned.

The report, based on joint research with Forensic Architecture, a research team that uses videos, shadow analysis, satellite images and other techniques to plot maps of conflicts, tries to offer the most detailed reconstruction of the events of Black Friday to date, in hopes of bolstering allegations against Israel that are now the subject of a preliminary investigation before the International Criminal Court in The Hague.

The Israeli military has yet to decide whether to open an internal criminal investigation of the Rafah episode. Amnesty International and other human rights groups dismiss the military’s ability to credibly investigate itself.

The Hamas fighters came out of the ground just after 9 a.m., an hour into the 72-hour cease-fire that had been brokered by the United States and the United Nations the night before. Lieutenant Goldin, an officer in a reconnaissance unit of the Givati Brigade, was patrolling with a commander and a radio operator when they came under attack.

Commanders invoked the “Hannibal procedure,” one of the Israeli military’s most dreaded and contentious directives, which allows for the use of maximum force to prevent captors from getting away with their captives, even at the risk of endangering the lives of captured Israelis. Long and agonizing hostage negotiations with militant groups have often ended with lopsided prisoner exchanges that freed hostile militants, and many Israelis have interpreted the directive to mean that a dead soldier is preferable to a live one in captivity.

Reports of an internal military examination indicate that in the first three hours, when it was not yet clear whether Lieutenant Goldin was dead or alive, Israel fired more than 1,000 artillery shells in Rafah and dropped more than 40 bombs.

The mapping of the strikes by Amnesty International and Forensic Architecture suggests that the primary targets were intersections of the main road running through the area, and locations that Israel believed concealed the entrance or exit points of the tunnel used by the militants.

In what Amnesty said was the most deadly strike of the day, two one-ton bombs were dropped on a residential area in the Al Tannur neighborhood of eastern Rafah, destroying several buildings that were largely empty and killing at least 16 civilians on the streets.

“It was a black day; I cannot think of a worse day,” Abdel-Rahim Abdel-Karim Lafi, whose son, Yehya, was killed as they fled the area, was quoted as saying.

The Israeli government slammed the Amnesty report as “fundamentally flawed in its methodologies, in its facts, in its legal analysis and in its conclusions.” Dismissing the group’s findings as “smoke and mirrors,” the Foreign Ministry said in a statement, “It seems that Amnesty forgot that there was an ongoing conflict, during which the I.D.F. was operating to stop rocket fire and neutralize cross-border assault tunnels, and Palestinian terrorist organizations were actively engaging in intensive conflict against the I.D.F. from within the civilian environment.”

NGO Monitor, an Israeli advocacy group that examines the work of other nongovernmental organizations, said that Amnesty failed to point out that three Palestinians described as health workers who were killed along with a wounded old man, a woman and three children in an ambulance bombed by Israel were claimed by Islamic Jihad as members of that extremist group.

Amnesty did in fact acknowledge that point in a footnote, but said that even if the paramedics were affiliated with Islamic Jihad, they were not fighters and were not participating in hostilities at the time of the attack, and were therefore protected under international humanitarian law.

On the other side of the divide, in the Goldin family apartment in Kfar Saba, which is filled with artwork by Lieutenant Goldin; his twin brother, Tzur, who was also fighting in Gaza; and two older siblings, their parents, Leah and Simcha, are appealing for international help in returning their son’s body to Israel by bringing pressure to bear on Hamas.

In a news conference on Aug. 1, Lieutenant Goldin’s parents noted in an interview on Tuesday, President Obama condemned Hamas for ambushing the soldiers during the cease-fire and called for their son’s unconditional release.

“If the world is speaking now about the reconstruction of Gaza and humanitarian gestures, the first one should be to give back the bodies,” said Mr. Goldin, a historian, referring to his son, who was to be married, and another Israeli soldier, Staff Sgt. Oron Shaul, who was a killed in a different battle during the war.

Hamas has been ambiguous about whether it is holding Lieutenant Goldin’s remains, saying it will not release information unless Israel pays a price by releasing prisoners.

Calling for a change in perception, Mr. Goldin said, “Israel should not be concerning itself with what price it will pay, but with what price Hamas will pay for not giving the bodies back.”

It is also unclear whether the body remains deep underground, along with those of the Hamas fighters, in the bombed-out tunnel.

Prime Minister Benjamin Netanyahu of Israel and the defense minister, Moshe Yaalon, a cousin of Simcha Goldin who knew Hadar from the time he was born, have pledged to spare no effort to bring the bodies home.

“People forget that our soldiers went to defend the country,” said Leah Goldin, an engineer, referring to the thousands of rockets that Hamas fired at Israel. She added that Israel would also pay a price for not bringing back her son’s body, given the solemn contract between the military and Israel’s young people, most of whom are conscripted at 18, that a soldier will never be abandoned in the field.

When it comes to ransomware, you don't always get … END_OF_DOCUMENT_TOKEN_TO_BE_REPLACED

Peyton Carr is a financial advisor to founders, … END_OF_DOCUMENT_TOKEN_TO_BE_REPLACED