You are here: Home / Sports / Jacob DeGrom Flirts With No-Hitter and Settles for Another Win 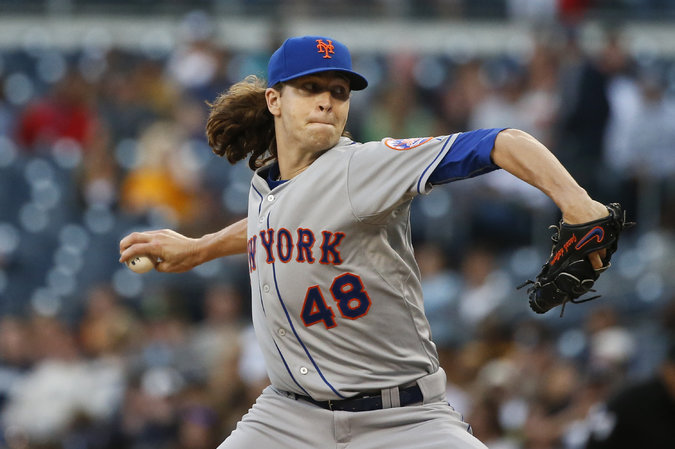 SAN DIEGO – Three years ago to the day, Mets Manager Terry Collins had been a nervous wreck, watching Johan Santana push past his pitch count. Santana, the Metsâ prized ace, was still working his way back from shoulder surgery, but he refused to leave the mound, and that night at Citi Field, he threw the first no-hitter in franchise history.

Collins had been tortured by the memory ever since. Santana was never the same.

Collins must have had flashbacks Monday, at Petco Park, as Jacob deGrom carried a perfect game into the sixth inning. DeGrom had already had Tommy John surgery, and the Mets had gone to extensive lengths researching and developing strategies to keep him and the rest of their young, talented pitching staff healthy all year.

“I was just sitting, thinking to myself, well, this could be a night where we’re going to have to sit back and watch what happens,” Collins said.

Collins could breathe easy once the Padres’ Clint Barmes singled off deGrom to start the sixth. Collins let deGrom throw 105 pitches, on which deGrom lasted eight innings, struck out eight batters and held San Diego scoreless. DeGrom (6-4) allowed only two hits all night, lowering his E.R.A. to 2.41, and the Mets beat the Padres easily, 7-0.

This wasn’t even deGrom’s best start in the last few weeks. Two starts ago, he held the Cardinals to one hit in eight innings and struck out 11 batters.

This win felt all the more satisfying for how the day had started. When Collins arrived at the park, he wrote a lineup that he was relatively pleased with. This was no small feat, since the Mets have been ravaged by injuries that seem to crop up every week. Sure enough, 45 minutes later, Collins had to scrap the lineup.

Lucas Duda, the first baseman, one of Collins’ few stalwarts, would miss the game with a bruised right knee. A pitch had hit it the day before. “Who’s going to know what’s going to happen in the next 45 minutes?” Collins asked, dryly.

The lineup responded with 13 hits. Daniel Murphy went 4 for 5, driving in three runs and scoring three runs. Ruben Tejada went 3 for 5 and scored twice. Collins had decided last week to start playing Tejada at third base regularly, and for all the uncertainty around the team, that move has proved a success.

During training camp this year, despite indications otherwise from the front office, Collins had declared that Tejada had a chance to earn a starting spot at shortstop. Tejada had once been labeled the shortstop of the future but had squandered it with a series of transgressions stemming from laziness. This seemed like his last chance to redeem himself and regain his role - and again, he did not perform.

And again, Tejada was relegated to the bench, until last week.

“I don’t think it’s his last shot, at 25 years old,” Collins said. “But I do believe that it’s important that he re-establish himself as a quality major-league player.”

Undoubtedly, something inside Tejada has clicked. In the first inning here, Andrew Cashner, the Padresâ starter, challenged him with a 95-mile-per-hour fastball, and Tejada roped it for a ground-rule double. He later scored the first of the Metsâ two runs in the inning. Then he singled in the fifth, starting a four-run inning.

In his last four games, Tejada is batting .471.

It is unclear how long Tejada will man third base. Collins indicated that he could possibly juggle the infield arrangement, if the injured David Wright is expected to miss an extended time, in addition to the time he has already missed. Wright is expected to visit the team here Tuesday, and the Mets expect an update on him soon.

The Mets’ defense did not seem to matter much Monday, with deGrom pitching. He struck out the first four batters he faced, and six of the first nine. He retired the game’s first 15 batters, easily, working with Kevin Plawecki, a rookie catcher.

“I heard somebody yell it out to me when I was walking off the field,” deGrom said, referring to the possibility of a no-hitter. “But I was trying not to think about that.”

Even in an opposing ballpark, enough Mets fans were in attendance that a palpable feeling of expectation began to build. It was most noticeable, perhaps, when Barmes got the Padres’ first hit, and Collins and the Padres fans here sighed in relief.

DeGrom made sure to strike out the next batter, on a changeup. Years ago, of course, at the Metsâ spring training complex, Santana had generously taught deGrom his patented changeup, the pitch that had helped Santana throw the no-hitter.

As deGrom walked off the mound after the eighth, a section of Mets fans behind the visitors’ dugout gave him a standing ovation. He had not delivered a historically memorable night, as Santana had, but they probably would not soon forget it.

Terry Collins said that Jenrry Mejia, the Mets closer who was suspended for performance enhancing drugs, is expected to return to the United States in about 10 days or so in anticipation of his re-joining the team. Sometime thereafter, Mejia will make rehab starts to rebuild strength in his arm. He is eligible to rejoin the Mets on July 7, and Collins indicated he would be welcomed back. “We’ll figure it out,” Collins said. “We’ll find a spot. The way things are going, we’ll have a few openings.”

When it comes to ransomware, you don't always get … END_OF_DOCUMENT_TOKEN_TO_BE_REPLACED

Peyton Carr is a financial advisor to founders, … END_OF_DOCUMENT_TOKEN_TO_BE_REPLACED