You are here: Home / Business / JPMorgan Reclaims Place Among Top 10 US Biggest Stocks 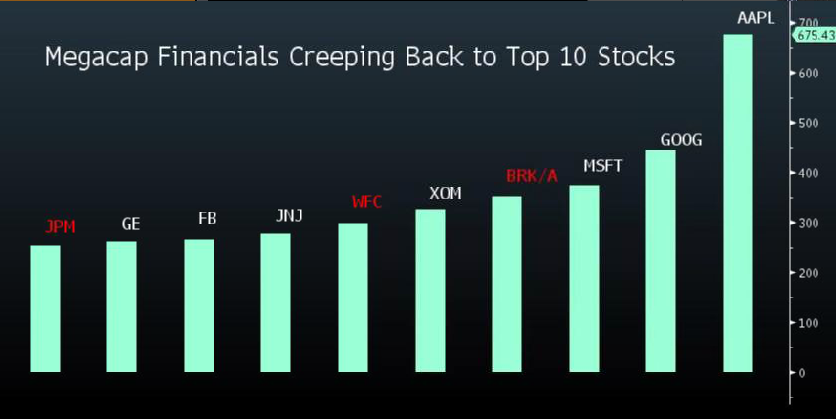 Don’t look now, but megacap financial companies are creeping back onto the list of the biggest U.S. companies. With $253 billion in market capitalization, New York-based JPMorgan Chase & Co. just surpassed Procter & Gamble Co. and Wal-Mart Stores Inc. to join the top 10 ranking after a five-year hiatus.

The ascent highlights Wall Street’s recovery from a crisis that crippled the economy and ejected virtually every lending institution from the ranking six years ago. While the group’s weighting in the Standard & Poor’s 500 Index is still far from the glory days, megabanks are back, driven by earnings growing five times faster than the market.

“This odyssey represents a degree of normalization that has returned to the financial sector,” Jeff Korzenik, the Chicago-based chief investment strategist at Fifth Third Bancorp., said by phone. The firm oversees $27 billion. “It also represents to some degree the faith that investors have that banks are an attractive investment going forward.”

JPMorgan, the biggest U.S. bank by assets, has rallied 9.4 percent this year, lifting it one notch and into the top 10 after ending 2014 in 11th place. The lender hadn’t occupied a slot since 2009.

While megabanks are returning, the rest of the industry has yet to catch up with the bull market. At 16.8 percent of the S&P 500, the group trails technology. In their heyday in 2006, banks were the largest sector, at 22 percent.

“Large, diversified financials are still a big, significant part of the market,” said Daniel Morris, global investment strategist at TIAA-CREF Asset Management in New York, which oversees about $869 billion. “Post-crisis legislations are aimed at preventing a too-big-to-fail scenario. Perversely, they create some incentives that have reinforced the position of big banks because they can afford the increased regulatory burden.”

Bank of America Corp. and Citigroup Inc., ranked among the 10 most valuable 10 year ago, are now at Nos. 18 and 20, respectively. American International Group Inc., the other stock that made the list in 2006, has fallen to 59th.

After spending much of the years since the crisis cutting costs, repaying bailouts and settling government probes or divesting assets under pressure from regulators, Wall Street firms are re-emerging with stronger balance sheets and better profit prospects.

Thanks to an improving economy, earnings for the industry will grow 5.7 percent this year, compared with about 1 percent for the overall S&P 500, analyst estimates compiled by Bloomberg show.

Acquisitions have helped the largest financial firms grow, according to John Fox at Fenimore Asset Management in Cobleskill, New York. At the height of the financial crisis, JPMorgan took over Bear Stearns Cos. and Washington Mutual Inc.’s bank units while Wells Fargo bought Wachovia Corp.

“Companies that survived have done a lot of opportunistic mergers and acquisitions,” Fox, director of research who helps oversee more than $2 billion at Fenimore, said by phone. “They have grown book value and earnings. The market is recognizing that.”

When it comes to ransomware, you don't always get … END_OF_DOCUMENT_TOKEN_TO_BE_REPLACED

Peyton Carr is a financial advisor to founders, … END_OF_DOCUMENT_TOKEN_TO_BE_REPLACED