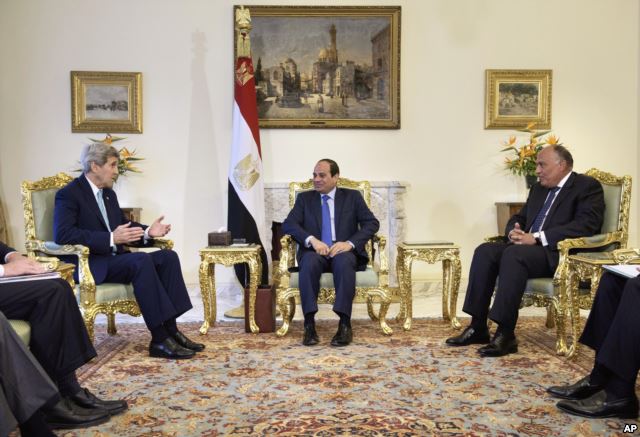 Concerns about the Iran nuclear deal and other regional issues are being raised by Gulf Cooperation Council foreign ministers in meetings with U.S. Secretary of State John Kerry in Doha, Qatar.

Avoiding nuclear weapons threats to the region is a top priority to the six GCC countries, said Qatari Foreign Minister Khalid Bin Mohammed al Attiyah.  The GCC hopes to achieve security, peace and stability with the help of the United States, he said.

Kerry is meeting with the group to ease concerns about last month’s multi-national agreement on Iran’s nuclear program.  Some GCC members have questioned if the deal, which could result in an empowered Iran, would be destabilizing to the region.

They also question if Iran would use the additional revenue that would result from lifting of international sanctions to provide more funding to militant groups such as Hezbollah.

The peace process between Israel and the Palestinians is also a GCC concern.  The Qatari minister said the Middle East was “suffering from the failures and the freeze” of the peace process,” which he said was the result of Israeli “occupation.”

He urged the United States to “exert more effort” to get the peace process back on track.

In wide-ranging comments, he said the GCC was also “keen” to achieve unity of Yemen,  where a Saudi-led coalition has been helping the government battle Houthi rebels.

The talks Kerry is holding with foreign ministers from Saudi Arabia, Bahrain, Kuwait, Qatar, Oman and the United Arab Emirates follow a summit President Barack Obama held with representatives of those nations in May.

On the sidelines of Monday’s GCC meeting, Kerry and Saudi Foreign Minister Adel al Jubeir are meeting with Russian Foreign Minister Sergei Lavrov for what a senior State Department official said would include discussion of the ongoing crisis in Syria.

Kerry arrived in Doha, late Sunday, after spending the most of the day in Egypt in a strategic dialogue session with Foreign Minister Sameh Shoukry that focused on security and other issues.

“If Iran is destabilizing, it is far, far better to have an Iran that doesn’t have a nuclear weapon than one that does,” said Kerry in a joint appearance with Shoukry

“I am absolutely convinced that Egypt, Israel, the Gulf states, every country in the region, is safer with one-year breakout for 10 years than two months,” he said, referring to provisions for Iran in the Joint Comprehensive Plan of Action.

Kerry is on a five-nation tour of the Middle East and South Asia.  In Egypt, he also met with President Abdel Fattah el-Sissi, in a diplomatic show of support for Egypt’s ongoing faceoff against Islamist extremists in the Sinai peninsula.

U.S. relations with Egypt have been strained since Mr. Sissi, the country’s one-time army chief, overthrew the elected Islamic president, Mohamed Morsi, in 2013.  More than 1,000 Morsi supporters were killed in a crackdown on protests and militants have since killed hundreds of Egyptian soldiers and policemen.

Speaking alongside Shoukry, Kerry spoke of the need for “balance” in fighting militants and respecting human rights in Egypt.

From Qatar, Kerry travels to Singapore, Malaysia and Vietnam, three countries that have been involved in talks on the proposed Trans Pacific Partnership to cut tariffs and trade barriers.

He will also attend a forum in Kuala Lumpur organized by ASEAN, the Association of Southeast Asian Nations.

While in Hanoi, Kerry will take part in an event marking the 20th anniversary of the establishment of diplomatic relations between the United States and Vietnam following the lengthy U.S. war there four decades ago.

When it comes to ransomware, you don't always get … END_OF_DOCUMENT_TOKEN_TO_BE_REPLACED

Peyton Carr is a financial advisor to founders, … END_OF_DOCUMENT_TOKEN_TO_BE_REPLACED