You are here: Home / Education / The last two Thanksgiving turkeys pardoned by Barack Obama in his White House mandate 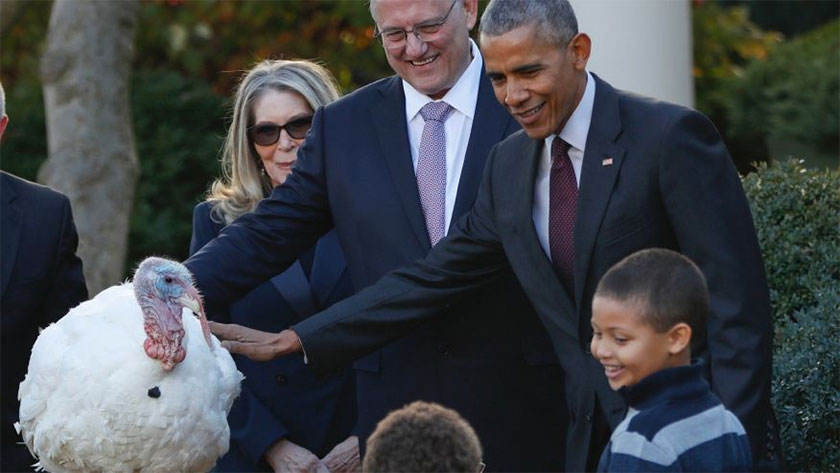 The American President Barack Obama, pardoned the last two Thanksgiving turkeys from his mandate, on Wednesday, during the traditional ceremony, which takes place every year at the White House, informs the CNN. Along with Barack Obama, at the Rose Garden were two nephews, Aaron and Austin Robinson, the sons of Michelle Obama’s brother, Craig Robinson, under the conditions in which the two daughters of the presidential couple, Malia and Sasha were absent from the event. ‘Actually [Sasha and Malia] just couldn’t take my jokes anymore. They were fed up’, joked the president.

The white turkeys pardoned this year by Obama, Tot and Tater, were brought to Washington from the state of Iowa. ‘I want to take a moment to recognize the brave turkeys who weren’t so lucky. Who didn’t get to ride the gravy train to freedom. Who met their fate with courage and sacrifice and proved that they weren’t chicken’, continued the president, in the same funny note.

Obama thanked the American people, with this occasion, in the name of his family, for their trust. The American president said that the annual tradition will not end with his mandate to the White House, ending with his well-known slogan: ‘Yes, we can!’. Barack Obama will be replaced to the White House in January, by Donald Trump, who also sent a message of Thanksgiving. ‘It is my prayer, that on this Thanksgiving, we begin to heal our divisions and move forward as one country, strengthened by a shared purpose and very, very common resolve,’ was the message from Trump for the American people.

Thanksgiving is a celebration of the United States of America with a tradition of about 150 years, being marked on an annual basis on the fourth Thursday of November. The tradition is to eat turkey at the dinner.

When it comes to ransomware, you don't always get … END_OF_DOCUMENT_TOKEN_TO_BE_REPLACED

Peyton Carr is a financial advisor to founders, … END_OF_DOCUMENT_TOKEN_TO_BE_REPLACED