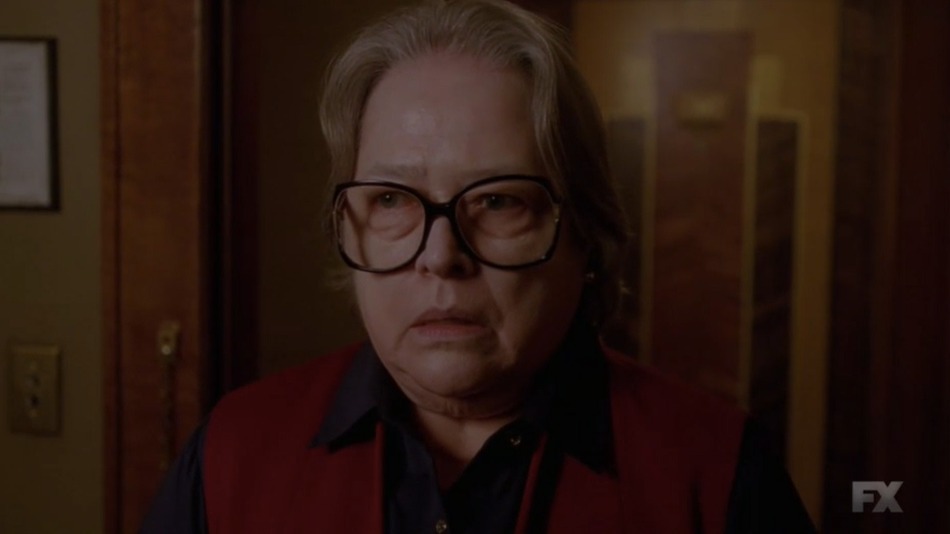 “It’s ironic. I never knew how to live until I died.” So speaks Iris, the all-but-invisible receptionist of the Hotel Cortez, minutes after she takes her first life — well, lives, more precisely.

Until this week, Kathy Bates’s time on American Horror Story: Hotel had been characterized by fulfilling menial tasks at the behest of Countess Elizabeth (Lady Gaga), like fetching blood from Swedes and keeping an eye on precious vampire babies. But now that she’s a vampire herself, turned by her own son Donovan (Matt Bomer), she’s finally finding her groove — a fact that her stellar new partner-in-crime Ramona Royale (Angela Bassett) can certainly appreciate.

This week’s episode is called “Room Service,” taking its title from the cathartic moment when Iris completely and utterly screws Darren Criss. No, really, she puts a cork screw into the Glee actor while delivering room service to his stuck-up hotel guest character, and his equally snooty girlfriend.

The hipster pair arrive at the hotel and quickly become irritants for Iris, getting high on edibles and demanding delicacies like grilled romaine and paté. So how does Iris respond? By serving them cat food and cork-screwing them both to death and then using a dinner knife to slit Criss’ throat wide open and drink his blood. It’s her very first kill, and her very first meal as a newly turned vampire.

But it’s not her first drink of the good stuff. Before the fit of murder, glamorous bartender Liz Taylor (Denis O’Hare) hooks Iris up with some of the Countess’ special sanguine supply, with a touch of triple sec for good measure.

Liz fuels Iris throughout the evening, regaling the clerk with tales of meeting the Countess all the way back in 1984, on a fateful night where Liz, formerly known as Nicholas, wore women’s clothing in public for the first time. Liz never looked back from that moment forward, killing his old self and becoming someone new — someone who speaks with screams, not whispers.

This episode of #AHS was just incredible. #LizTaylor broke my heart and Kathy Bates ate it. @denisohare

Likewise, there’s nothing quiet about Iris’ newfound vampirism. With the taste of blood on her lips, and a mission to infiltrate the Countess’ inner circle as directed by Donovan and Royale, Iris has quickly become one of Hotel’s most intriguing patrons.

But Iris isn’t the only one navigating the early days of becoming a vampire. Far from it. The episode also highlights how the virus is treating Alex Lowe (Chloë Sevigny), and perhaps even more importantly, her patients.

Alex, a virologist, uses her own vampire blood to cure a young boy of the measles. Her good intentions lead the way toward something obscenely cruel, as the vampirized child subsequently murders his parents, drains them of their blood, then rinses and repeats the process with several teachers and class mates at his school on Halloween day.

It’s not the first time American Horror Story has brought its atrocities to bear upon the education system — Evan Peters famously shot up his school as Tate on the first season — but it’s one of the most bone-chilling sequences in the series all the same, especially since there are now at least three new blood-sucking kids running around Los Angeles…

…including a redhead played by Thomas Barbusca, the Burp King of Westchester from Netflix’s Wet Hot American Summer.

How much longer until everyone starts settling their scores with a “vamp off,” then? At the rate that everyone’s transforming from mere mortal to eternal creature of the night, it’ll happen sooner than you think.

When it comes to ransomware, you don't always get … END_OF_DOCUMENT_TOKEN_TO_BE_REPLACED

Peyton Carr is a financial advisor to founders, … END_OF_DOCUMENT_TOKEN_TO_BE_REPLACED