You are here: Home / Technology / LG’s Pricey Rolly Keyboard Furls into a Stick, Not Fun for Typing 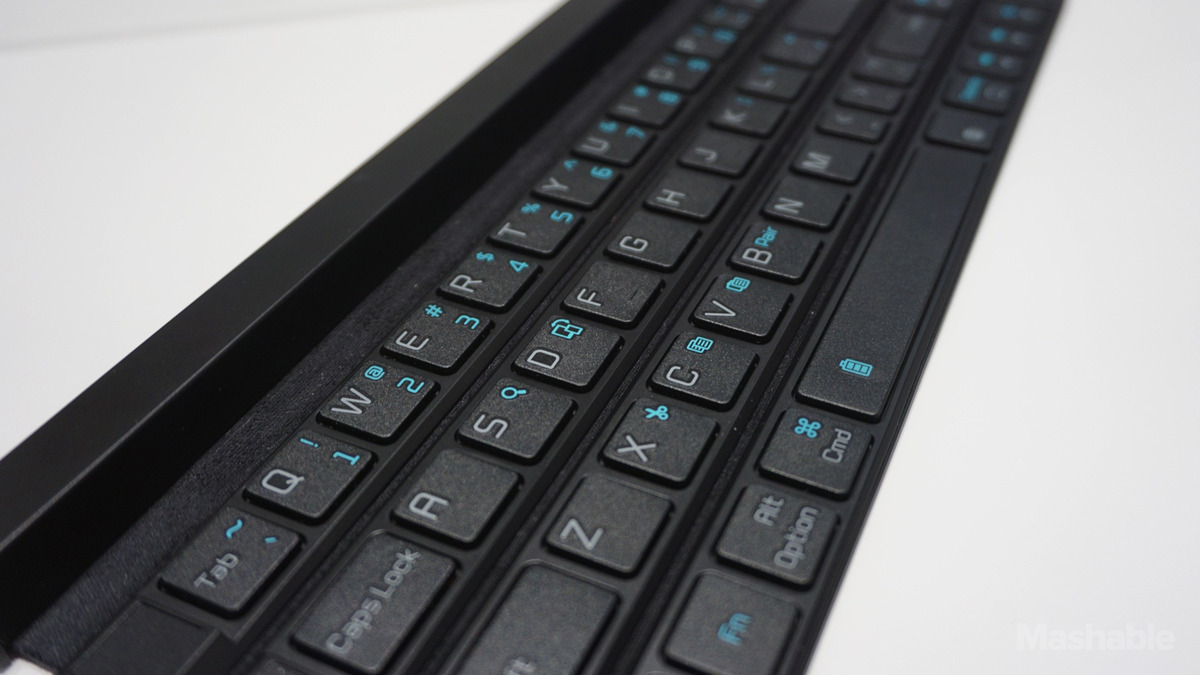 It seems I have an affinity for trying out keyboards that are hard to type on. I’m a big fan of products that are compact and can transform. So when I heard about LG’s collapsible Rolly Keyboard that furls into an easily-transportable stick, I knew I had to try it out. After all, the worst part about typing on my iPad is that it’s hard to type fast on the screen’s non-haptic software keyboard.

Lucky for me, LG had the Rolly Keyboard on display at its IFA booth and I got to give it a test type.

The Rolly’s design is ingenious, far more compact than a foldable tablet keyboard like the Zagg Pocket Keyboard, folding up magnetically. When you unroll it, the keyboard kicks into startup mode and awakens the closest Bluetooth-paired device, so you can start typing right away.

The keyboard comes in two colors: white and black and has two little hooks that pop out to prop up your tablet (or smartphone). The white and its orange accents look cooler, if you ask me, like something from the anime Neon Genesis Evangelion.

Typing on the keyboard isn’t cool at all. Because the Rolly furls into an elongated rectangular tube, it has these wide spaces between each row of keys, which makes typing a bigger stretch up and down. I kept missing the lettered keys and hitting the spacing instead.

I’m sure you could get used to it with more time, but there’s going to be a breaking in period and that’s never something you want — you want to be able to just start typing asap.

LG says the battery is good for up to three months on one AAA battery, which is pretty great, but couldn’t the company have squeezed in a high capacity rechargeable battery inside? I mean, the Rolly’s battery is basically two battery sticks long.

As if typing on the keyboard wasn’t hard enough, it’s also expensive: $120 when it comes out in the U.S. later this month.

Still, the Rolly is an interesting solution to a problem that ails almost all portable tablet keyboards: They’re too big to carry. If you’re the type to pound out long emails or work on the go with your phablet, you could probably get used to the Rolly’s weirdly-spaced keyboard with practice.

When it comes to ransomware, you don't always get … END_OF_DOCUMENT_TOKEN_TO_BE_REPLACED

Peyton Carr is a financial advisor to founders, … END_OF_DOCUMENT_TOKEN_TO_BE_REPLACED