You are here: Home / World / Life Thrives 30 Years After Chernobyl 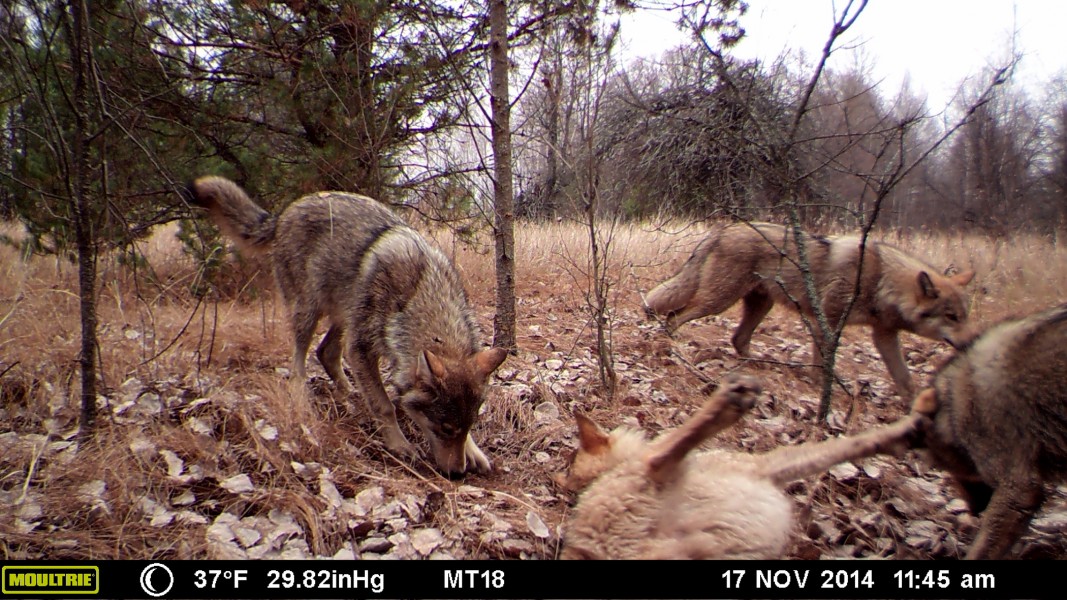 Thirty years ago, the Chernobyl Nuclear Power Plant in Pripyat, Ukraine, became the site of the world’s largest nuclear accident. While humans are now scarce in the Chernobyl Exclusion Zone, continued studies—including a just-published camera study conducted by researchers from the University of Georgia’s Savannah River Ecology Laboratory—validate findings that wildlife populations are abundant at the site.

The camera study, published in the journal Frontiers in Ecology and the Environment and led by UGA’s James Beasley, is the first remote-camera scent-station survey conducted within the Chernobyl Exclusion Zone, or CEZ. The study’s results document species prevalent in the zone and support earlier findings that animal distribution is not influenced by radiation levels.

The restricted CEZ encompasses the bordering lands of Ukraine and Belarus impacted by radiation fallout from the accident, which occurred April 26, 1986.

Within the southern portion of Belarus is the Polessye, or Polesie State Radiation Ecological Reserve, with over 834 square miles of diverse landscape including forests and deserted developed lands. The levels of radiation vary significantly across this landscape.

“The earlier study shed light on the status of wildlife populations in the CEZ, but we still needed to back that up,” said Beasley, an assistant professor with UGA’s Savannah River Ecology Laboratory and the Warnell School of Forestry and Natural Resources and the senior author on the study. “For this study we deployed cameras in a systematic way across the entire Belarus section of the CEZ and captured photographic evidence—strong evidence—because these are pictures that everyone can see.”

The study was conducted over a five-week period at 94 sites using 30 cameras. A remote camera was set up on a tree or tree-like structure for seven days at each location. Each station was equipped with a fatty acid scent to attract the animals.

Sarah Webster, a graduate student at SREL and Warnell working with Beasley, set up the stations approximately 2 miles apart to prevent animals from visiting more than one station during a 24-hour period.

The team documented every species captured on the cameras and the frequency of their visits, specifically focusing on carnivores, Webster said, because of their hierarchy on the food chain.

At the top of the food chain, carnivores have an increased opportunity to receive contamination. In addition to ingesting it from prey that have foraged on the landscape, they receive it directly from the environment—through the soil, water and air.

“Carnivores are often in higher trophic levels of ecosystem food webs, so they are susceptible to bioaccumulation of contaminants,” Webster said. “Few studies in Chernobyl have investigated effects of contamination level on populations of species in high trophic levels.”

Beasley and his research team saw 14 species of mammals on the camera footage. The most frequently seen were the gray wolf, wild or Eurasian boar, red fox and raccoon dog, a canid species found in East Asia and Europe. Beasley said all of these species were sighted at stations close to or within the most highly contaminated areas.

“We didn’t find any evidence to support the idea that populations are suppressed in highly contaminated areas,” Beasley said. “What we did find was these animals were more likely to be found in areas of preferred habitat that have the things they need—food and water.”

Webster said locations were chosen to ensure habitat variance and to incorporate the diverse levels of radiation in the zone.

The study provides much needed verification, Beasley said, but further studies are needed “to determine the density of wildlife and provide quantitative survival rates.”

Additional researchers on the study were UGA’s Mike Byrne of the SREL and Warnell School and Stacey Lance and Cara Love of the SREL and Odum School of Ecology; Thomas Hinton, Institute of Environmental Radioactivity, Fukushima University, Japan; and Dmitry Shamovich, Sosnovy Bor, 211467 Vitebsk Region, Belarus.

The study was funded by the National Geographic Society Committee for Research and Exploration, the Institut de Radioprotection et de Surete Nucleaire and the Norwegian Radiation Protection Authority.

The study, “Where the wild things are: Influence of radiation on the distribution of four mammalian species within the Chernobyl Exclusion Zone”, and the full list of wildlife documented are available at http://onlinelibrary.wiley.com/doi/10.1002/fee.1227/full or http://dx.doi.org/10.1002/fee.1227.

When it comes to ransomware, you don't always get … END_OF_DOCUMENT_TOKEN_TO_BE_REPLACED

Peyton Carr is a financial advisor to founders, … END_OF_DOCUMENT_TOKEN_TO_BE_REPLACED