You are here: Home / World / Meanwhile in the Future: When Antibiotics Stop Working 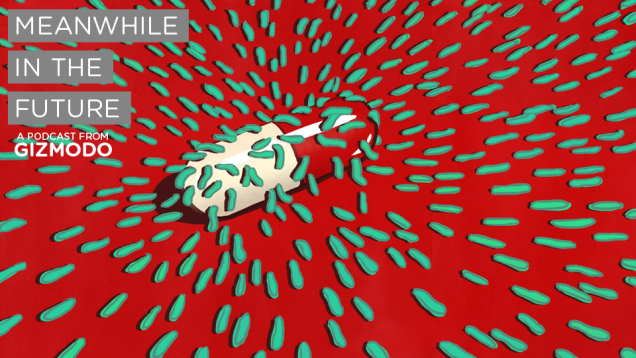 This week’s episode of Meanwhile in the Future gets very scary, very quickly. And we’re not going all that far into the future, either. We’re already starting to see the beginnings of an age without antibiotics. So what does a world without these drugs look like? Listen to find out.Over the past 85 years, antibiotics have been miracle drugs. They’ve kept infections at bay and opened up a world of medical possibilities: organ transplants, heart surgery, chemotherapy. But they’re not going to work forever, the slow, inevitable march of evolution means that antibiotic resistance is on the rise.

This week I spoke with Maryn McKenna and Raj Bhardwaj. McKenna is an independent journalist who has spent many years tracking the rise of antibiotic resistance (enough years that many people refer to her as “scary disease girl”). Her book SUPERBUG: The Fatal Menace of MRSA is about the antibiotic resistant pathogen MRSA, and her next book, about the use of antibiotics in agriculture, will be published next year. For weekly updates on our impending diseases of doom, you can check out her blog Germination at National Geographic. Bhardwaj is a doctor in Calgary, as well as a frequent columnist on the CBC’s morning show Eyeopener.

Some of the scenarios we’ve tackled previously on this podcast are really out there—I doubt space pirates will drag a second moon to Earth any time soon. But antibiotic resistance is already happening. In 2013 the CDC published a “threat report” on the status of drug resistance, estimating that every year two million people in the United States become infected with antibiotic resistant bacteria, and at least 23,000 people die from those infections. A group called the Review on Antimicrobial Resistance, convened by the UK Prime Minister, came out with a report in December of last year projecting 10 million deaths a year by 2050.

In this episode, we only talked about the ways humans might die, and how to try and prevent those gory, slimy deaths. But antibiotic resistance is a very complex problem. We didn’t touch on the various plans people have for trying to convince pharmaceutical companies to make new antibiotics again, or why they stopped making them in the first place (spoiler alert: money). Nor did we talk about the ways in which agriculture, and the constant, low doses of antibiotics fed to the animals we farm, contribute to the problem.

And, if you can’t get enough dystopian antibiotic free horror, you can check out this book by Sally Davies, the chief medical officer of the UK.

When it comes to ransomware, you don't always get … END_OF_DOCUMENT_TOKEN_TO_BE_REPLACED

Peyton Carr is a financial advisor to founders, … END_OF_DOCUMENT_TOKEN_TO_BE_REPLACED