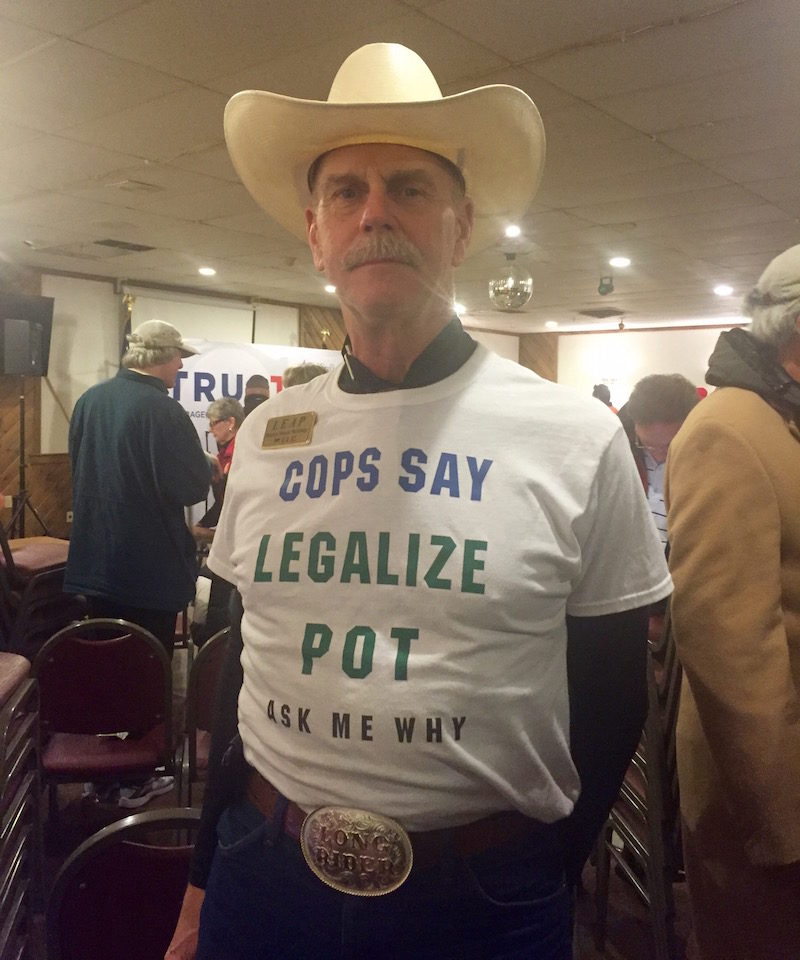 Howard “Cowboy” Wooldridge is hard to miss. In the middle of a New Hampshire snowstorm the day before the state’s primary vote, Wooldridge could be found at various presidential candidates’ events wearing a big belt buckle and a cowboy hat.

But possibly the most interesting part of his getup was his shirt.

The belt buckle, he explained, was from when he rode a horse by himself across the United States. And the cowboy hat? Aside from proclaiming his Texas roots, he said it helps him stand out among the thousands of lobbyists in Washington, DC.

Wooldridge is the co-founder of Law Enforcement Against Prohibition, a group of current and former law enforcement officials arguing marijuana should be legalized.

Wooldridge, who goes by Cannabis Cop on Twitter, is a retired police detective from Fort Worth, Texas. At a Ted Cruz event in Manchester, New Hampshire last week, I followed the directions on his shirt and asked why he supports legalized weed. He said,

We can do a better job of arresting pedophiles, drunk drivers, terrorists, you name it — public safety threats — if we don’t spend millions of hours chasing a green plant.

Secondly, I want to eliminate the job option every teenager has of selling marijuana because every week in this country somewhere, teens are shot and killed selling marijuana. They’re involved in the drug trade, and that’s shameful; it’s immoral and preventable.

He went on to explain his brother sold him beer when he “made a bad choice at 16 to get drunk in Panama City, Florida.” He thought this was a positive thing, explaining,

No teenager should have a job that can get him killed. When my brother sold me the beer, he had no chance of getting hurt or killed because there is no ‘beer trade’ in America.

Wooldridge acknowledged there are “another 10 good reasons” marijuana should be legalized, including the racism in policies and enforcement but, along with his experience as a cop, the reasons above are what motivate him to do his work. He continued,

I’ve arrested pedophiles. I’ve arrested drunk drivers before and after they’ve killed somebody. With marijuana, people always like to make jokes about it and giggle and brownies, you know, you’ve heard this before. But as policy, it’s not a joke. As policy, it’s deadly, deadly serious.

Marijuana use is prohibited under federal law, which is one of the reasons Wooldridge is so passionate about the 10th Amendment, which preserves states’ power. Based on that, Wooldridge said Cruz is the strongest candidate on the Republican side. He said,

He would, as president — I’ve talked to him before, several times actually — he would sign a bill to repeal the 1937 law that made marijuana a federal prohibition. That’s all I’m asking for from our federal [government].

Wooldridge isn’t the only one considering pot legalization in his decision of whom to vote for. At a polling place on the day of the New Hampshire primary, one young man told me he voted because he wants marijuana legalized to help create jobs.

When it comes to ransomware, you don't always get … END_OF_DOCUMENT_TOKEN_TO_BE_REPLACED

Peyton Carr is a financial advisor to founders, … END_OF_DOCUMENT_TOKEN_TO_BE_REPLACED