You are here: Home / Sports / MLB’s Executive Branch: Who’s in the Running to Run Your Team? 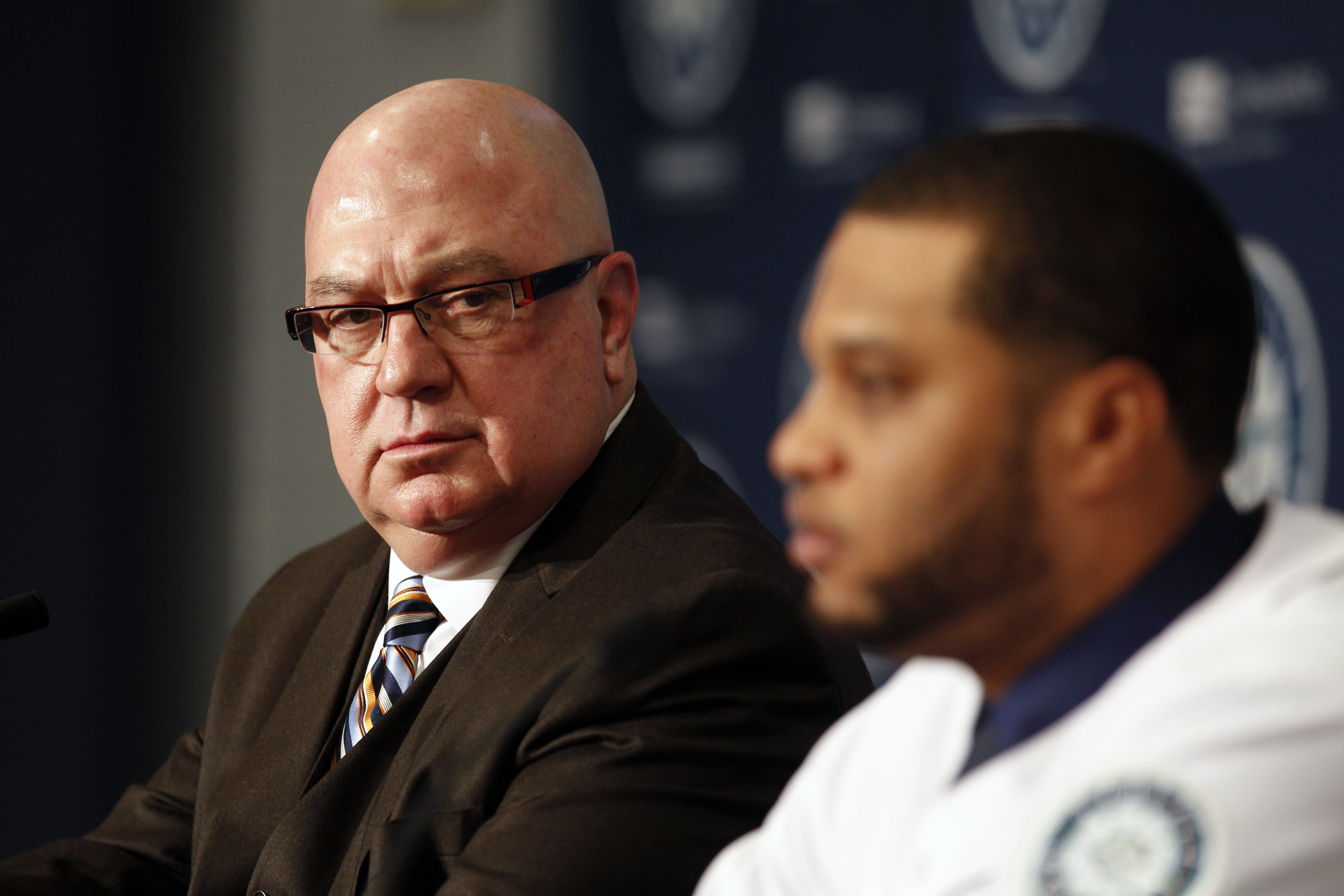 A year ago, it was the defections of Andrew Friedman and Joe Maddon from the Tampa Bay Rays that disrupted several front office and managerial roles throughout baseball. This year, it’s already happening.

Four general manager positions are already open, and there’s enough potential tumult in October that we may forget the playoffs are happening.

The Philadelphia Phillies and Cincinnati Reds potentially could join the search for a chief baseball executive, or even the Baltimore Orioles.

And we won’t even get into the managerial carousel, where there could be seven potential openings: Miami and San Diego (definitely), Detroit (probable), Boston (possible), Seattle (maybe), Washington (unlikely, unless ownership intervenes), Los Angeles (depending on the Dodgers’ October) Cincinnati (may depend on Barry Larkin’s interest) and Philadelphia (grossly unfair it if happens).

Here’s your postcard look at the game of musical chairs in baseball’s executive branch while we wait for the music to stop:

Why it’s open now: The Mariners fired Jack Zduriencik after seven years and perhaps their most disappointing season in decades. This is a team that was built to win the World Series, and instead, was a colossal flop, despite the acquisition of MVP candidate Nelson Cruz.

In the running: The Mariners want to win right now and prefer someone with vast experience. We’re talking about you: Kevin Towers, Ken Williams, Jim Hendry, Jerry Dipoto, Frank Wren, Jennings, Larry Beinfest and Dan O’Dowd. If they decide to hire an assistant GM with vast experience, it will either be Billy Eppler of the Yankees or Thad Levine of the Rangers. If you want a dynamic darkhorse, look at the tandem of Pat Gillick/Charley Kerfeld, who worked together in Philadelphia.

What could – or should – happen now: Towers, a native of Oregon, has won in his first year on the job in San Diego and Arizona, and may be atop their list now. He’s He also has an advantage that he’s worked with integral parts of the front-office staff, including assistant GM Jeff Kingston, scouting director Tommy Allison and special assistant Ted Simmons.

Why it’s open now: Ben Cherington walked away when the Red Sox hired Dave Dombrowski to be president of baseball operations. Dombrowski says he would have kept him aboard, but now he can hire his own GM.

In the running: Dombrowski wants loyalty, and someone he feels comfortable with, particularly after a feeling of betrayal by some in the aftermath of his firing in Detroit. Frank Wren, who worked with Dombrowski in Montreal and Florida, is the leading candidate. Dombrowski could also turn to Mike Hazen, the Red Sox’s assistant GM, or Arizona vice president Dejon Watson.

What could – or should – happen now: The Red Sox, who skirted the MLB minority mandate policy by not interviewing anyone besides Dombrowski for the president’s job, have to abide by the policy this time. They need to talk to Watson, Tyrone Brooks of Pittsburgh, and Billy Owens of Oakland. Certainly, Watson has one of the finest resumes of any candidate in baseball. Still, if Dombrowski is looking for comfort and experience, Wren figures to be atop the list.

Why it’s open now: Jerry Dipoto, who no longer wanted to be part of the power struggle with manager Mike Scioscia, walked away on July 1. The Angels turned to Bill Stoneman as the interim GM, but they’ve already begun the interview process.

In the running: The Angels could turn to anyone from Hendry to Towers to Ned Colletti to Eppler to Levine to Watson. Yet, there are unique dynamics involved. You need someone to handle the strong personalities and influences of owner Arte Moreno and Scioscia.

What could – or should – happen now: The most popular candidate for the opening is Jim Hendry, the only GM in history to lead the Cubs to three postseasons. Hendry has the acumen, but most important, the personality to blend in with Moreno and Scioscia. Yet, one high-ranking Angels executive believes that Eppler, Brian Cashman’s trusted assistant, is the frontrunner.

Why it’s open: The Brewers and GM Doug Melvin announced last month a mutual decision that Melvin would step down. In truth, owner Mark Attanasio decided he wanted a change.

In the running: The Brewers want a young analytical mind to be the GM, and also plan to hire a president of baseball operations to guide him. The leading candidates are Braves assistant GM John Coppolella, Pirates assistant Tyrone Brooks, Oakland A’s assistant Dan Kantrovitz and Angels assistant Matt Klentak.

What could – or should – happen now: The Brewers like assistant Ray Montgomery, along with highly touted scouting director Zack Minasian, who recently received a contract extension, but they want a GM from outside the organization. Coppolella has been called “Rain Man’’ in Atlanta with his brilliance and ability to recall information on any player in organized baseball. Brooks and Kantrovitz will also be strongly considered.

Why it could be open: The Phillies have had one of the most dramatic downfalls in baseball since 2011. Sure, it’s hardly all GM Ruben Amaro’s fault. He had an instrumental role when they won too, but he’s become Public Enemy No. 1 from their fans.

In the running: This will be strictly new president Andy MacPhail’s call. He worked alongside Minnesota Twins assistant Wayne Krivsky in Minnesota and Baltimore, and Klentak in Baltimore.

What could – or should – happen now: MacPhail will take his time deciding, but Amaro seems destined to a new role in the organization. Certainly, Krivsky and Watson deserve long, hard looks, and Dipoto’s and Wren’s names are circulating in the Phillies’ offices.

Why it could be open: The Reds have taken a nosedive the last two years, drawing owner Bob Castellini’s ire. Walt Jocketty, who is close to Castellini, is expected to stay aboard, but the only question is whether he will continue as GM or in another high-ranking position in the organization.

In the running: If Jocketty is promoted, Towers would be the logical candidate. They are grooming assistant GM Dick Williams to eventually be the GM, but the Reds don’t believe he’s quite ready.

What could – or should – happen now: The Reds are expected to stay pat for another year, both in the front office and managerial seat, but Hall of Famer Barry Larkin is so revered, he could make the Reds change their mind in a hurry.

Why it could be open: Come on, someone has got to take the fall for the Orioles’ abrupt collapse. They have lost 12 of their last 13 games, and outscored 78-35, falling out of the playoff race. Orioles owner Peter Angelos wants someone to explain why their organization is dysfunctional, with a depleted farm system.

In the running: The Orioles are headed in the wrong direction after running away from the AL East a year ago. Does this mean that GM Dan Duquette is gone, after nearly leaving last winter for the Toronto Blue Jays’ president’s job? Does this mean than Jennings, who nearly joined the Orioles two years ago before being denied permission by the Marlins, could be free to join Showalter? Or does nothing change?

What could – or should – happen now: The Orioles are going to lose some key pieces if nothing changes, but Angelos is used to a dysfunctional front office. He may even enjoy it. Remember, Andy MacPhail resigned four years ago for a reason.

When it comes to ransomware, you don't always get … END_OF_DOCUMENT_TOKEN_TO_BE_REPLACED

Peyton Carr is a financial advisor to founders, … END_OF_DOCUMENT_TOKEN_TO_BE_REPLACED