You are here: Home / World / More Than 785,000 People Across 5 Continents March For Climate

“Across five continents, people have taken to the streets to demand that we change the way we power our world,” Kumi Naidoo, executive director of Greenpeace, said in a statement. “In towns and cities across the globe, people have called for political leadership on climate change.”

More than 2,000 events took place on Sunday in cities like London, Sydney, Mexico City, and Vancouver. According to the BBC, marches also took place across the equator in Kenya, across a glacier in Chile, and throughout the Marshall Islands, a South Pacific island country threatened by rising sea levels. Ten countries broke records for all-time largest individual climate marches, with Australia and India leading the pack with some 140,000 participants each. In terms of individual events, Melbourne and London claimed the largest marches, with 60,000 and 50,000 participants each. By contrast, last year’s People’s Climate March in New York drew some 400,000 participants.

“As someone from Kenya, a country which is feeling the impact of climate change, it means a lot to see people from all walks of life, of every color and creed, speaking with one voice about climate change,” Mohamed Adow, senior climate adviser for Christian Aid, said in a statement. “Today’s act of solidarity is on an unprecedented global scale. The numbers of marchers in places not known for climate change activism shows the scale of the international demand for political action.”

The heart of the global day of action was intended to be Paris, where an official march was expected to draw some 200,000 participants. That official event was cancelled, however, in the wake of the deadly November 13 terrorist attacks that killed 130. Instead, activists placed 22,000 empty shoes outside of the Place de la République. Meant to symbolize those who could not march, the shoes included a pair of black shoes sent by Pope Francis and a pair of running shoes from U.N. Secretary General Ban Ki-moon. 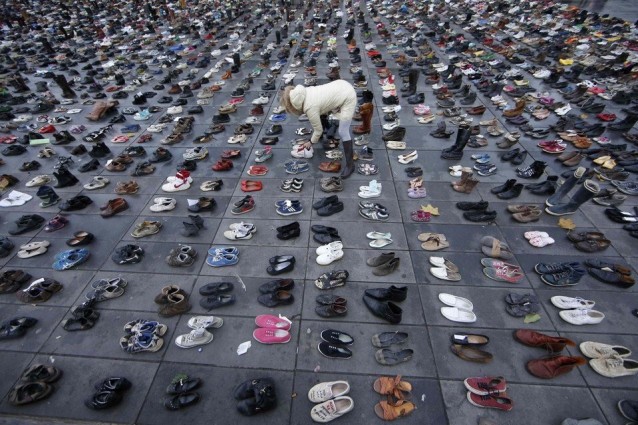 In addition to the shoes, 10,000 activists held hands to form a 1.9-mile human chain along the intended march route, from the Place de la République to the Place de la Nation. According to Grist, the human chain drew a diverse group of activists, from youth to indigenous people, who held signs and banners during the peaceful demonstration.

Hours after the human-chain disbanded, however, a small group of activists clashed with French police at the Place de la République, chanting “State of emergency, police state, you will not deprive us of our right to demonstrate.” According to media reports, the protesters threw shoes and candles — which had been used as memorials to the victims of the November 13 attacks — at police officers, who responded by firing tear gas and nonlethal flash-bang grenades.

“These disruptive elements have nothing to do with defenders of the environment,” Hollande said on Sunday, adding that the protesters in question were “not there so that the [climate] talks succeed,” but were only there to “create incidents.”

350.org, one of the organizers of the global marches, released a statement noting that the protest included “some parts of the climate movement in France.” 350.org France Coordinator Nicolas Haeringer added that the group would “stand against any attempts by the French authorities to use the incidents this afternoon to unnecessarily clamp down on civil liberties and prevent the types of demonstrations that are at the heart of any democracy and climate progress.”

Even before Sunday’s conflict, at least two dozen climate activists had been placed under house arrest throughout France for allegedly flouting the ban on public marches. Activists, in response, have accused the government of using anti-terrorism measures to suppress civil liberties, citing the allowance of activities like Christmas markets and sporting events as examples of the government’s hypocrisy.

“All this makes us think that the state of emergency is being used as a way to shut us up,” Juliette Rousseau, a coordinator with Climat 21, told the Los Angeles Times.

In addition to the November 29 march, climate activists had planned a day of civil disobedience and marches for December 12. Following news that the government was prohibiting marches, the organizing groups vowed to find a way to make their voices heard despite a formal ban on their planned activities. It is unclear if the slew of house arrests — or yesterday’s clash with the police — will deter future action.

When it comes to ransomware, you don't always get … END_OF_DOCUMENT_TOKEN_TO_BE_REPLACED

Peyton Carr is a financial advisor to founders, … END_OF_DOCUMENT_TOKEN_TO_BE_REPLACED