You are here: Home / Business / ‘Murwai Monster’ appeared on beach from New Zealand 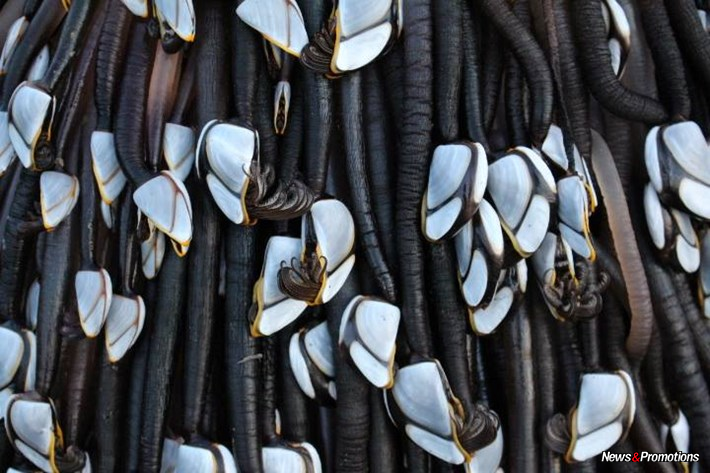 A mysterious object brought by the waters on the Murwai beach in the neighborhood of Auckland, in New Zealand, caused a wave of speculation on the social network after less robust than many locals and from all over the world tried to guess what the object is, reports the DPA. Melissa Doubleday posted a photo with this object, long by a few meters and covered by crustaceans, on Friday night on Facebook. ‘Just curious to know if anyone knows what this is??! Washed up on Muriwai Beach.’ ‘It looks like worms with shells I’ve never seen before with these funny creatures that just [coming] out’, she added.

Since then, there have been speculations from ‘Drift wood covered in Goose Barnacles’, to ‘Alien Pod time capsule’ to a ‘Christmas tree from the beach’. Anyway, a few days after it was discovered, the object was named, on the social networks, ‘The monster of Muriwai’, after the beach where it was discovered. In fact, the ‘monster’ seems to be a piece of floating wood covered with duckling clams, a crustacean species considered to be a delicatessen in Portugal and Spain, according to the information published in the media. Other strange objects appeared on the beaches of New Zealand in the coming weeks after the earthquake with the magnitude of the 7.8 from the end of November, which caused the raising of the ocean’s bottom with two meters. After the appearance of the news about the ‘Monster of Muriwai’, the people of New Zealand rushed to see the object on the beach, located in an area at about 40 km North-West of Auckland, the largest city in New Zealand.

It seems that the unusual attraction will have a short duration of life. ‘Everything that was on it is dead now and it has a very nasty smell’, posted Melissa Doubleday on Facebook.

When it comes to ransomware, you don't always get … END_OF_DOCUMENT_TOKEN_TO_BE_REPLACED

Peyton Carr is a financial advisor to founders, … END_OF_DOCUMENT_TOKEN_TO_BE_REPLACED