You are here: Home / Business / Music Streaming On the Rise, Artist Revenue, Not So Much 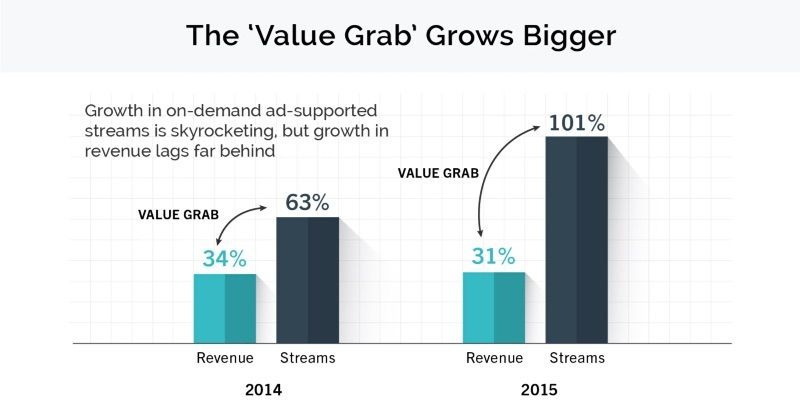 The Recording Industry Association of America has released its annual report on the state of the music industry — and, well, things could be worse.  You want the good news first? Overall, the industry is up almost 1 percent (.9 percent at retail, .8 percent at wholesale).

The MVP, of course, is music streaming, which overtook digital downloads as the most profitable format with 29 percent growth amid a decline in both digital and physical sales.

Now for the bad news: While streaming is on the upswing , revenues from on-demand and ad-supported services like YouTube have been “meager,” according to the RIAA. The data shows what the RIAA considers to be an “alarming disparity” between the growth in these streams compared to revenue.

“This is why we, and so many of our music community brethren, feel that some technology giants have been enriching themselves at the expense of the people who actually create the music,” said RIAA CEO Cary Sherman in a statement, referencing AM/FM broadcasters who are exempt from paying artists and labels, satellite radio’s “unfair” rate standard, and the notice and takedown provisions of the Digital Millennium Copyright Act.

“We call this the ‘value grab’ — because some companies take advantage of outdated, market-distorting government rules and regulations to either pay below fair-market rates, or avoid paying for that music altogether.

“The popularity of music is greater than ever… It is the throbbing heartbeat of social media and it is a must-have ingredient of any major technology platform,” Sherman added. “But reforms are necessary to level the playing field and ensure that the entire music community derives the full and fair value of our work.”

When it comes to ransomware, you don't always get … END_OF_DOCUMENT_TOKEN_TO_BE_REPLACED

Peyton Carr is a financial advisor to founders, … END_OF_DOCUMENT_TOKEN_TO_BE_REPLACED