You are here: Home / Weather / Myanmar Flood Death Toll Over 100, with 1 Million Affected 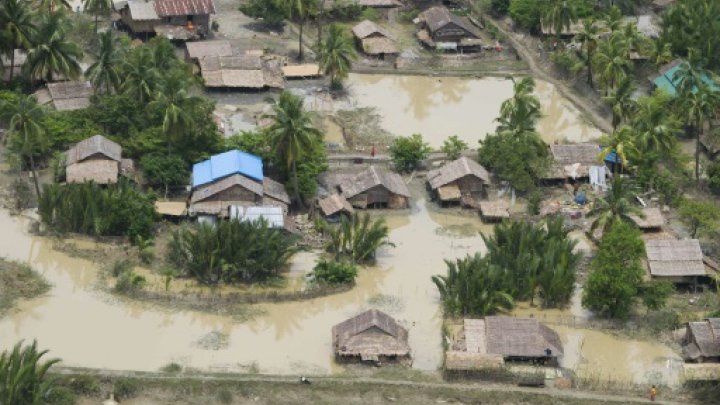 Myanmar, one of Asia’s most impoverished countries, has been hit incredibly hard by weeks of torrential rain with 12 out of 14 states and regions suffering flooding. The death toll from severe flooding across Myanmar has grown to over 100, with nearly one million people affected. Fear intensifies for the country’s crucial rice bowl region.

Floods from a heavy monsoon season have cut through swathes of South and Southeast Asia in recent weeks, claiming hundreds of lives and displacing millions.

Myanmar, one of Asia’s most impoverished countries, has been hit particularly hard by weeks of torrential rain with 12 out of 14 states and regions suffering flooding.

International aid has been stepped up in recent days following an official government request for help.

The Global New Light of Myanmar newspaper Monday gave updated government figures, of “more than 100” dead and “nearly one million” people affected nationwide by the inundations.

More than 1.2 million acres (486,000 hectares) of rice fields are currently under water, with more than 430,000 acres destroyed by the floods, the paper added.

Fears have grown for rising waters in the the more downstream areas of the Irrawaddy basin and its delta, two key agricultural areas close to the commercial hub Yangon

In recent days fears have grown for rising waters in the the more downstream areas of the Irrawaddy basin and its delta, two key agricultural areas close to the commercial hub Yangon.

Citing the weather bureau, the Global New Light of Myanmar said river levels had dropped slightly on Sunday but “still remained above their designated danger levels”.

Myanmar’s previous junta government was accused of indifference in its sluggish response to Cyclone Nargis in May 2008, a crisis which at least 138,000 people dead or missing.

The country is set for a general election in November and the floods have taken on a political dimension, with both the quasi-civilian government and opposition — led by Aung San Suu Kyi — at pains to show they are reacting speedily to the floods.

President Thein Sein was pictured visiting relief efforts on Sunday in the Irrawaddy region as army chief Min Aung Hlaing made trips to the western states of Sagaing and Chin.

But many of those hit by the flooding appear not to be relying on government help, either trying to cope alone or turning to local monasteries or community groups.

Authorities have insisted that the election set for November 8 will go ahead despite the floods, even as they try to assess the scale of the damage.

When it comes to ransomware, you don't always get … END_OF_DOCUMENT_TOKEN_TO_BE_REPLACED

Peyton Carr is a financial advisor to founders, … END_OF_DOCUMENT_TOKEN_TO_BE_REPLACED