You are here: Home / Featured / The mystery of the 9/11 missing flag still remains 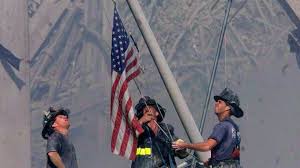 On 9/11 2001, three firefighters from NY hoisted an American flag, amid the still burning ashes of the WTC. The iconic image became a symbol of hope, but after a couple of hours the flag disappears from its place. After 15 years, the flag is back in NY and it will be shown at the National September 11 Memorial and Museum situated right on the Ground Zero’s site. The disappearance of the flag is a mystery, just like its reappearance. The flag was found at about 5.000 kilometers away, in a small city from the Washington state. In 2014, a man called Brian came at a firemen section from Everett with a flag in a plastic bag.

He said that he saw a documentary about the missing flag and he thinks he has it. The man said that he received the flag from an employee of the National Oceans Administration who also received it from a widow of a 9/11 victim. The story cannot be checked and the disappearance remains a mystery. Brian, who presented himself as a Marine fighting in the Middle Orient is also missing and the police forces haven’t found him yet. The authenticity of the flag was confirmed by Bill Schneck, an experienced criminologist from the Washington state police. He compared the dust on the flag to the known evidences gathered after September 11 and the dust has the same characteristics with the one from Ground Zero.

Schneck also compared the flag to the one from the original photo taken at the place of the action and both of them have the same general profile and the same electrical tape that unites two lines. The analyst concluded that the two flags have the same size, same similar features and are made from the same material.

When it comes to ransomware, you don't always get … END_OF_DOCUMENT_TOKEN_TO_BE_REPLACED

Peyton Carr is a financial advisor to founders, … END_OF_DOCUMENT_TOKEN_TO_BE_REPLACED