You are here: Home / Sports / N.B.A Finals: Cleveland Cavaliers Tired? They Should See the Other Guys 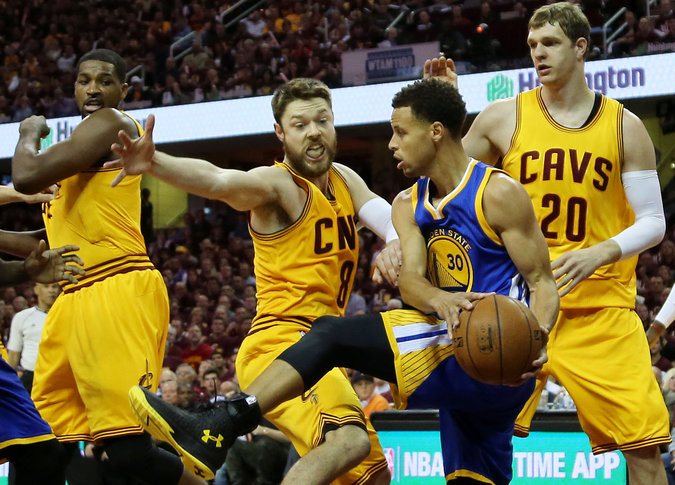 CLEVELAND - James Jones, the other player on the Cavaliers who has made five straight trips to the N.B.A. finals, contemplated the value of experience.

“We try not to look at our finals experience as an advantage,” he said. “We just look at it as an opportunity to view the game from a different perspective.”

The view looked pleasant for the Cavaliers ahead of Game 4, set for Thursday night at Quicken Loans Arena. With a two-games-to-one lead against the Golden State Warriors, the Cavaliers sounded confident Wednesday even if they looked a tad haggard, as another LeBron James postseason production began to close in on history.

“You guys can see I’m not getting much sleep right now, but I’m O.K. with that,” James said. “I’m O.K. with not sleeping to be able to prepare myself and mentally keep myself intact on what’s the main objective for me right now, and that’s to make sure that my guys are laser sharp.”

James, of course, has been in this position before, and it would be impossible for him to look more at ease on this grand stage, especially after he carried the Cavaliers to a 96-91 victory in Game 3 on Tuesday night. He stands two wins from his third title. It would be the Cavaliers’ first, and an entire city is on edge.

For the Warriors, the loss was another harsh lesson about the rigors of a championship chase. Bereft of any players with finals experience, the Warriors spent 36 minutes looking completely out of sorts before Stephen Curry nearly engineered a comeback in the fourth quarter.

“Very urgent,” the Warriors’ Klay Thompson said when asked about the team’s mentality. “No one wants to be down 3-1.”

The series has featured just about everything one could want or expect from the finals - everything, that is, except for pristine offense. But the fact that points are not coming easily has only enhanced the importance of each possession, and the Cavaliers are squeezing each second from their trips up the court.

The Warriors want to run. The Cavaliers are effectively slowing things down by funneling all of their sets through James, who has commandeered the finals spotlight. J. R. Smith noted that the Cavaliers had a group of players who understood their roles within their LeBron-centric universe.

It sounded bizarre coming from an unpredictable player who had not exactly made his living by coloring inside the lines. But James, through the force of his personality and his reputation, has been a calming influence on Smith and others. Smith still shoots with something that approximates abandon, but he is not quite as reckless, at least not anymore.

It is worth emphasizing that this is James’s fifth consecutive trip to the finals, and he has turned this series into his personal playground. Operating without Kyrie Irving and Kevin Love, both sidelined with season-ending injuries, James is keenly aware of his remaining teammatesâ offensive limitations. Through three games, he has tried 107 shots, scored 123 points and collected 25 assists.

Yet James has also worked to infuse less heralded teammates with confidence.

Look no further than Matthew Dellavedova, who has stepped in for Irving and played with relentless energy. He had 20 points in Game 3, threw his body all over the court and then left the arena in an ambulance because of dehydration. Dellavedova said he would be ready for Game 4.

“Right now, it’s just getting as much fluids in as you can, just trying to eat a lot,” he said Wednesday.

James has constantly praised Dellavedova, and deservedly so, describing his defense as “spectacular” after Game 2 and then saying he was made of steel after Game 3. On Wednesday, an intrepid member of the news media asked James if Australia ought to consider knighting Dellavedova.

“Whatever that guy wants or needs, I’m all for it,” James said.

The Cavaliers have not played perfect basketball - far from it. They are shooting 39.6 percent from the field in the finals.

“We make plenty of mistakes, like any other team,” the Cavaliers’ Iman Shumpert said. “But we refuse to let anyone play harder.”

At least one opposing player agreed with that assessment. Draymond Green, who has shot 26.7 percent for the Warriors and was laboring with back spasms after Game 3, said the Cavaliers were simply approaching each game with more energy.

The Warriors found more of a rhythm in the fourth quarter after Coach Steve Kerr summoned David Lee from the recesses of his bench. Lee set a series of screens for Curry at the top of the key, and Curry was able to find some daylight once Lee, a reliable scorer, rolled to the basket, dragging his defender with him.

The entire dynamic of the series can change again in Game 4. The Warriors have not played particularly well, yet they have been in every game, with opportunities to win. They also cited their ability to overcome adversity, pointing to the Western Conference semifinals, when the Memphis Grizzlies used their slowdown tempo (much as the Cavaliers have done) to seize a two-games-to-one lead. The Warriors reeled off three straight wins to advance.

James, meanwhile, seems intent on making the boldest statement of his career. A championship with this sort of injury-ravaged roster would be highly unusual if not unprecedented.

After Game 3, James stayed up late. He watched “Chopped” on the Food Network, he said, and then an episode of “Teen Titans,” an animated series about young superheroes. Feel free to draw your own conclusions.

“I know our team is fighting for our lives,” James said. “We’re undermanned. We’re undermatched, and we’re fighting. That’s all I know.”

When it comes to ransomware, you don't always get … END_OF_DOCUMENT_TOKEN_TO_BE_REPLACED

Peyton Carr is a financial advisor to founders, … END_OF_DOCUMENT_TOKEN_TO_BE_REPLACED