You are here: Home / Sports / N.B.A. Finals: One Measure of LeBron James’s Dominance 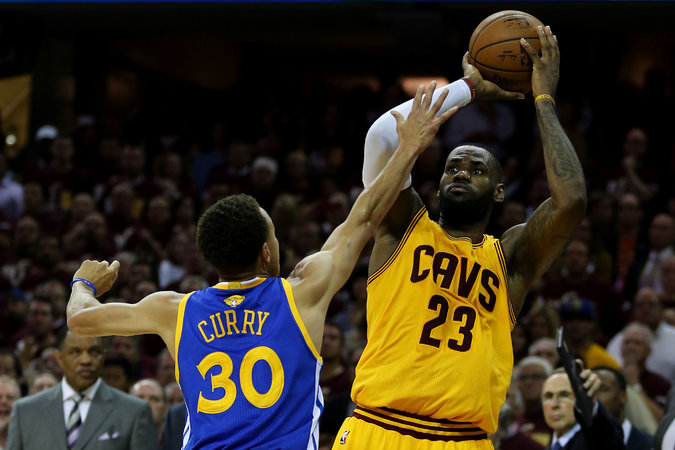 How dominant has LeBron James been for the Cleveland Cavaliers? You can make a good case that he is the most crucial player to a team in N.B.A. finals history.

One way to measure a player’s importance is usage percentage, which estimates how many of a team’s offensive plays are used by a player, whether by shooting the ball, getting to the free-throw line or making a turnover.

So far in this series, James’s usage rate is a sky-high 44.0 percent, meaning, roughly speaking, that 44 percent of the time the team’s offense runs through him. With key players injured and a team of role players, at best, around him, the Cavs have little choice but to make him their cornerstone.

Ranking second to James on the team is Kyrie Irving, who rated at 25.1 in the one finals game he played before being injured. Of players still active, the next ranked, at 19.4, is Matthew Dellavedova, the undrafted Australian whose rate in the regular season was 12.6. That is a steep drop-off.

Despite being the league’s most valuable player and the clear leader of the Golden State Warriors, Stephen Curry has a far lower figure than James in the finals, just 30.5. And he benefits from teammates who are more useful than Dellavedova, like Klay Thompson (24.5).

More conventional statistics back up James’s importance. He leads all players in the playoffs in minutes played, field goals made and attempted and assists. In addition to those categories, he leads his own team in free throws made and attempted, defensive and total rebounds, steals, points and turnovers. Rare is the Cleveland offensive play that James does not take part in.

James’s usage is up significantly from his rate of 32.3 in the regular season, when Irving and Kevin Love were healthy. He ranked just fourth in the N.B.A. behind Russell Westbrook of Oklahoma City, Dwyane Wade of Miami and DeMarcus Cousins of Sacramento.

Counting all of the rounds, Jamesâs rate is 37.8 so far in the playoffs. Going back to the 1970s, when the statistic becomes available, only one player who made the finals had a greater rate: In 1993, when he won the third of his first triumvirate of titles, Michael Jordan rated just higher, at 38.0, according to basketball-reference.com.

With Irving out for the season, James’s rate may well climb past Jordan’s before the series concludes. And Jordan’s rate for the 1993 finals alone, 38.9, lags behind James’s astonishing 44.0.

James may or may not drag the Cavs to a title. But either way, he is carrying his team in a way that few, if any, players have ever done.

When it comes to ransomware, you don't always get … END_OF_DOCUMENT_TOKEN_TO_BE_REPLACED

Peyton Carr is a financial advisor to founders, … END_OF_DOCUMENT_TOKEN_TO_BE_REPLACED