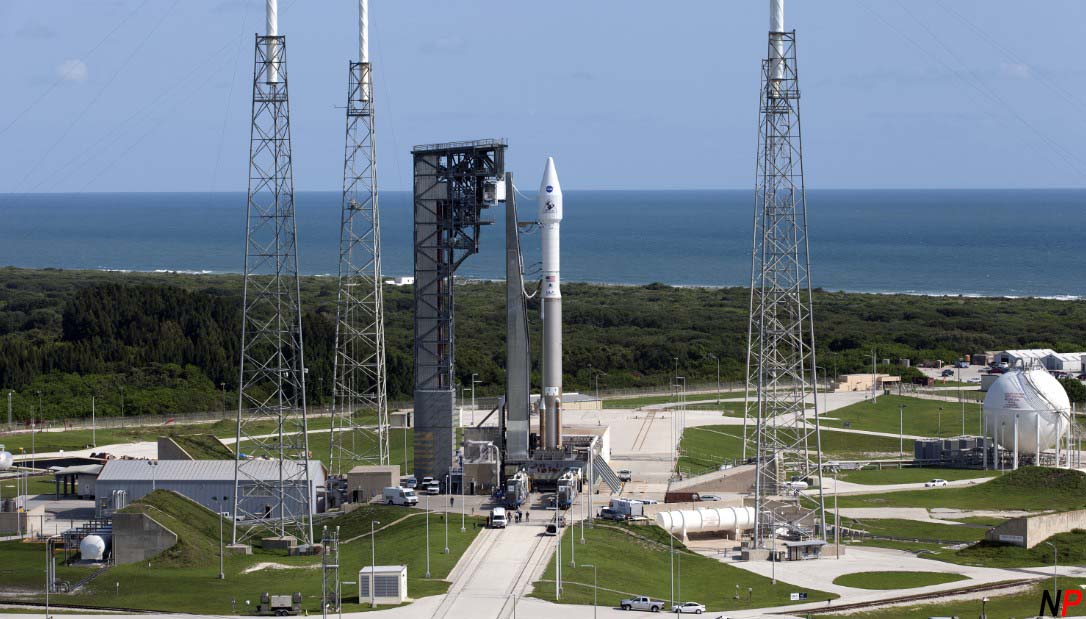 Cape Canaveral, Florida – NASA on Thursday evening launched a space probe called OSIRIS-Rex to chase down a dark, potentially dangerous asteroid called Bennu. The probe will take a sample of the asteroid and — in a US space first — bring the sample back to Earth.

“NASA did it again!” Jim Green, Planetary Science Division director at NASA, said at a post-launch briefing.
“Tonight is a night for celebration,” said Ellen Stofan, NASA chief scientist. “We are on our way to an asteroid.”
OSIRIS-REx lifted off at 7:05 p.m. ET from Cape Canaveral on top of a United Launch Alliance Atlas V rocket. NASA tweeted, “Our @OSIRISREx spacecraft is on its way, and everything is on the timeline …”

Mission managers said the launch was flawless, the spacecraft is in excellent health and that the mission is hitting all its early milestones.
“The OSIRIS-REx spacecraft is happy and healthy,” said Rich Kuhns, OSIRIS-REx program manager at Lockheed Martin Space Systems. Lockheed Martin built the spacecraft.
The mission’s principal investigator, Dante Lauretta, said the next big moment for him will be seeing Bennu for the first time from OSIRIS-REx.
“Everyone on the team has some image in their mind of what Bennu is going to look like and it’s going to be phenomenal to see what it really looks like.”
Those images should start arriving in about two years as OSIRIS-REx approaches Bennu.

Video Credit: Justin Bornstein
Life, sort of, imitating art
If you’re thinking the mission to Bennu sounds a bit like the plot from the 1998 sci-fi flick “Armageddon,” you would be right, but without Bruce Willis (there aren’t any people on this spacecraft) and without space shuttles. (NASA retired the shuttles in 2011.)
In this real life story, OSIRIS-REx will study and sample Bennu, a big, roundish space rock that has made it onto NASA’s list of Potentially Hazardous Asteroids. That means Bennu is one of the most dangerous space rocks we know of because it could one day collide with Earth.
The probe is scheduled to arrive at Bennu in August 2018. For months it will hang out — take pictures, make scans of the asteroid’s surface and create a map.
Then, in July 2020, OSIRIS-REx will unfurl its 11-foot-long (3.35-meter) robot arm called TAGSAM and make contact with Bennu’s surface for about five seconds. During those few seconds, the arm will use a blast of nitrogen gas to kick up rocks and dust and then try to snag a sample of the dust and store it.
“We are basically a space vacuum cleaner,” said Lauretta.
NASA hopes to get at least 2 ounces (60 grams) and maybe as much as 4.4 pounds (2 kilograms) of asteroid dust and small rocks.

“We kind of expect a gravel field on the surface of the asteroid,” Lauretta said. He said he thinks the rocks will be about half an inch, based on information gathered by NASA’s Spitzer Space Telescope.
OSIRIS-REx heads home in March 2021 and arrives back at Earth on September 24, 2023, but it won’t land. In a bit of Hollywood-style drama, it will fly over Utah and drop off the capsule holding the asteroid sample. A parachute will guide the capsule to the ground at the Utah Test and Training Range in Tooele County.

Will Bennu really hit Earth?
The short answer is maybe. If it does, it’s big enough to do some damage.
Bennu has a diameter of 1,614 feet (492 meters). It makes its next approach to Earth in 2135 when it will pass just inside the moon’s orbit.
This close approach will change Bennu’s orbit, and scientists say that could cause it to impact Earth sometime between 2175 and 2199. The odds are small — about 1 in 2,500. But NASA wants to get as much warning as possible for anything that threatens Earth.
It’s worth pointing out that while Bennu is a known threat, NASA said only about 51% of the near-Earth asteroids of Bennu’s size have been found.
Meaning there could be lots of unknown threats out there.

The mission is a first for NASA but …
This is not the first mission to bring an asteroid sample to Earth. Japan’s Hayabusa spacecraft brought back a small sample of asteroid Itokawa dust in 2010.
NASA also has brought back other space rocks and dust:
• The Apollo astronauts brought back rocks and soil from the moon.
• NASA’s Stardust mission brought back samples of dust from Comet Wild 2.
• The GENESIS mission brought back samples of the solar wind, material ejected from the outer portion of the sun, in 2004.
• And NASA has landed on an asteroid before: The NEAR-Shoemaker mission touched down on asteroid Eros in 2000. It’s still there. But it didn’t send back any samples.

What OSIRIS-REx won’t do …
It won’t blow up Bennu, and it won’t save the Earth from any other menacing space rocks.
Right now, efforts to defend the planet from asteroids and comets are still in their infancy.
“It really takes more than one agency for the kind of capabilities that are needed for this,” Lindley Johnson of NASA’s new Planetary Defense Coordination Office told CNN.
He said the new office is coordinating with several agencies, the US government and other nations to help develop resources to defend Earth from asteroids of about 330 feet (100 meters) in size or larger. (For smaller asteroids we would just be told to take cover.)

But we would have to know years in advance that a dangerous rock is coming before we could do anything about it.
“We would need probably at least five years warning to 10 years warning to be able to launch an effective space mission to deflect that object,” Johnson said.
NASA has a spacecraft called NEOWISE that is hunting potentially threatening asteroids. Ground-based telescopes also are helping watch Pan-STARRS, LINEAR (it discovered Bennu in 1999) and the Catalina Sky Survey.

Early Monday, the Catalina Sky Survey detected an asteroid close to Earth that had never been seen before. The rock was given the designation 2016 RB1.
“Just right about now, it’s on its closest approach to the Earth, passing underneath the Earth at about 21,000 miles (33,796 kilometers),” Johnson said a briefing Wednesday afternoon. “That’s closer than communications satellites orbit the Earth.”
NASA estimated the asteroid to be between 25 and 50 feet (7 and 16 meters) in diameter and said it was not a hazard to Earth. “If it were to have impacted the Earth, it would have disintegrated in the atmosphere,” Johnson said.
Besides trying to identify potentially hazardous asteroids, Johnson’s agency is working on plans to deflect them away from Earth. It’s collaborating with the European Space Agency on the Asteroid Impact and Deflection Assessment Mission, and it’s working with other NASA departments on the Asteroid Redirect Mission.

About the spacecraft
The name OSIRIS-REx is an acronym for the spacecraft’s mission objectives: Origins, Spectral Interpretation, Resource Identification and Security-Regolith Explorer. The acronym spells the name of the Egyptian god Osiris.
The probe is about 20 feet (6 meters) long with its solar arrays deployed. It’s 8 feet (2.43 meters) wide, and its height is about 10 feet (3.15 meters).
Minus fuel, OSIRIS-REx weighs 1,940 pounds (880 kilograms). With fuel — 4,650 pounds (2,110 kilograms).
The sample return capsule weighs about 100 pounds (45.4 kilograms).
The mission costs about $800 million excluding the rocket.
Bennu was named by North Carolina student Michael Puzio during a 2013 international contest. Puzio, who was 9 at the time, thought the spacecraft’s robot arm and solar panels looked like the Bennu bird, also from Egyptian mythology. (Before Puzio stepped up, the rock was known in the scientific community as 1999 RQ36.)
And what happens to the spacecraft after it drops off its sample?
OSIRIS-REx will keep flying and will go orbit the sun. NASA said it may be re-purposed, but it won’t be bringing home any more samples.

When it comes to ransomware, you don't always get … END_OF_DOCUMENT_TOKEN_TO_BE_REPLACED

Peyton Carr is a financial advisor to founders, … END_OF_DOCUMENT_TOKEN_TO_BE_REPLACED