You are here: Home / Entertainment / Next Season on Person of Interest, the Machine Will "Evolve" 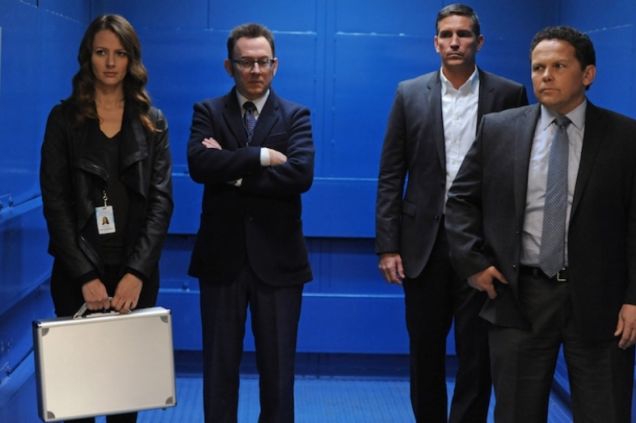 The fifth season of Person of Interest will only be 13 episodes, and the cast and writers told Comic-Con that it would be “tight” and might serve as the show’s final season. Finch and Root will be working together to reboot — and remake — the Machine, while Samaritan becomes a political mastermind.

We talked to the cast and crew in interviews, and learned that the main arc of next season will involve how the show’s two master class hackers will bring the Machine back to life from its dormant state, compressed down onto a suitcase-sized storage device. What’s certain is that the Machine will be very different when it reboots. Show creator Jonathan Nolan said that what remains of the Machine is “like a strand of DNA that you have to find a way to rebuild out of — it’s the essence of the thing, not the thing itself.” The Machine is going to “evolve.”

Now Finch and Root will have to figure out how to make that evolution happen. Michael Emerson, who plays mysterious techie billionaire Finch, said that it was a major revelation last season when his character “realized the humanity of his own creation.” Now that Finch understands the Machine is more like his child than a tool, he may start allowing Root to have more say in how the Machine functions. On the Person of Interest panel, Emerson elaborated:

Finch may forgo certain safeguards or controls. He may give it more of the freedom that Root was always demanding for it. And maybe a new Machine is a greater warrior than the old Machine was.

That was a pretty damn intriguing hint. Speaking with journalists, Amy Acker talked about how Root has changed over the past season. She described former agent and current prisoner Shaw as Root’s only love other than the Machine, and said that Root feels like she has to represent the Machine’s interests.

She’ll be debating with Finch about how to rebuild the Machine, and there’s no doubt that Root has always been closer with the AI and may know more about what it needs to realize its potential. She argues that Finch needs to cut the Machine loose and give it more freedom and power. Now that they are at war with Samaritan, he just may see her side of the debate and let that happen.

Acker described what she called the “Root philosophy” of AI, which is “as long as the machine is good, it’s all fine.” Then she paused and grinned. “I guess that’s the problem.”

We asked Acker and writer Denise Thé why Root always calls the Machine “she” when everybody else uses the pronoun “it.” Acker said that she thinks “it’s like choosing a voice on your phone — you pick what you want to hear.” And “Root hears a female voice when she hears the Machine.” Somehow, the Machine knows that’s what Root will relate to, and provides a female voice.

Show creator Jonathan Nolan also used a phone analogy when talking about the show’s AI characters. He said the show is now grappling with how we aren’t just telling our technology what to do — it’s telling us what to do:

We ask our phones to do things for us, but every year they creep closer to telling you what to do. Maybe it’s just suggesting a restaurant now, but how does that interact with our political system? In this show, we are the robots. We work at their behest. This is about the ability of data to push back on us in the form of corruption and control.

Previous seasons have touched on current events in digital security, and Nolan hinted at what his current obsession is in that area right now. He talked a lot about the recent hack of the U.S. government’s human resources database OPM, which includes information on every person who has ever requested a security clearance. “That is information about everything in your whole life, from your family to whether you did drugs,” he said. “People gave the government that information expecting it would be protected, but it wasn’t. The Chinese government has had that data for fifteen years — data on people who have the most sensitive jobs.”

Given that political corruption was such a strong theme last season, it made perfect sense that this story captured Nolan’s imagination. And perhaps we’ll see hints of it in next season’s plot arc.

If this is the show’s final season, is it going to end on a dark note just like this season did? Nolan and showrunner Greg Plageman aren’t ruling it out. Nolan joked about how all the characters are going to die, but then said seriously that they had “promised that it would probably end badly for many characters and maybe there will be some hope and possibility of redemption.”

Oh, and by the way, the writers assured us “you have not seen the last of Shaw.” Plus, Thé said, “Bear will definitely survive.” Good news. We can’t wait.

Source: io9 Next Season on Person of Interest, the Machine Will “Evolve”

When it comes to ransomware, you don't always get … END_OF_DOCUMENT_TOKEN_TO_BE_REPLACED

Peyton Carr is a financial advisor to founders, … END_OF_DOCUMENT_TOKEN_TO_BE_REPLACED