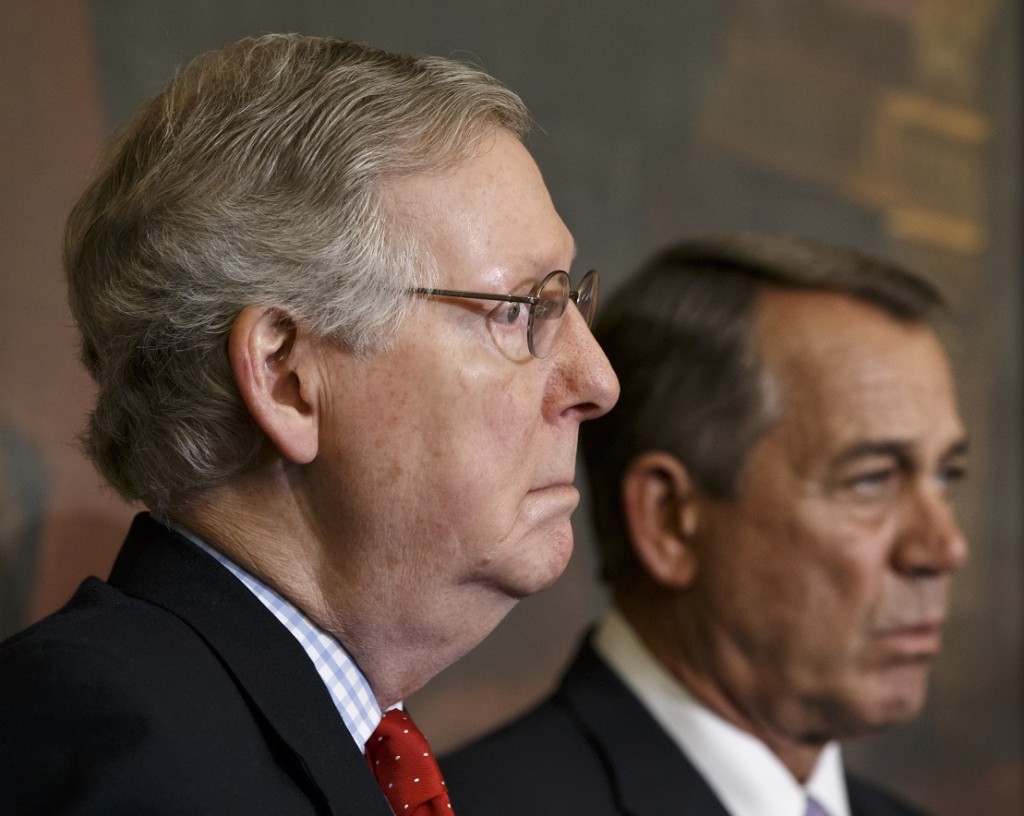 Senate Majority Leader Mitch McConnell, R-Ky., left, and Speaker of the House John Boehner, R-Ohio, stand together at a ceremony before the signing of the bill authorizing expansion of the Keystone XL pipeline, at the Capitol in Washington. The Republican party leaders strongly oppose President Obama’s Clean Power Plan, finalized today.

The Obama administration’s regulatory plan to fight climate change may now be final, but the political and legal battles to repeal it have just begun.

On Monday, the Environmental Protection Agency released the final version of its Clean Power Plan, the centerpiece of which is a regulation that requires power plants to slash their carbon emissions. The final version was expected to be “stronger in many ways than the proposed rule,” but was also expected to accommodate some of the intense opposition the plan has faced from the coal industry and politicians looking to preserve it.

But accommodations for the coal industry likely won’t stop it from trying to repeal the plan. Senate Majority Leader and coal industry advocate Mitch McConnell (R-KY) has vowed to use “every possible tool at his disposal” to roll back or delay it, arguing the limits on carbon will spell death for the industry in his state and across the country.

Already, McConnell and others have launched various campaigns to thwart the Clean Power Plan. The majority leader began telling individual states earlier this year to ignore the plan and refuse to comply with its requirements. He also warned other countries not to trust Obama’s promise that the regulations would succeed, a tactic to undermine the president’s international climate negotiations.

“There’s a very good chance that the case will end up at the Supreme Court, no matter who wins.”

Various lawsuits have also been launched by states and coal company Murray Energy claiming the EPA lacks authority to issue the regulations. But those lawsuits were thrown out by the D.C. Circuit Court of Appeals because they were deemed premature. Agency rulemaking has to be finalized before legitimate legal challenges can be filed, the court ruled.

Now that the regulatory plan is indeed final, at least two more big options are on the table for opponents. And one is, obviously, new lawsuits.

“The challenges that we expect, and that I would say are all but certain, are petitions for review of the rule to the D.C. Circuit,” said Jessica Olson, a partner at Ayres Law Group LLP who practices clean air and climate law. “These are run of the mill challenges to EPA. This is normal procedure, and exactly what we would expect.”

Olson told ThinkProgress that lawsuits challenging the rule could be filed with the D.C. Circuit minutes after the final rule is published in the Federal Register. That’s because legal petitions to review the agency rulemaking don’t have to immediately explain exactly why the rule is unlawful. It’s likely, Olson said, that attorneys for the most vocal opponents — McConnell, coal companies, and mostly Republican-led states — already have petitions written up and ready to go.

It’s likely that more than one legal challenge will be filed, Olson said, so the D.C. Circuit will probably not move forward immediately on the first petition. Instead, the court may wait for additional legal challenges, allow environmental groups and states that support the rule to join the proceedings, and consolidate everything into one case.

“[The court] knows this is a big deal,” Olson said. “There’s a very good chance that the case will end up at the Supreme Court no matter who wins.”

“It seems like a pretty unsuccessful path, but I don’t think that means they won’t try.”

The second big challenge the EPA’s climate plan now faces is congressional legislation. Now that the rule is final, members of Congress can attempt to delay and ultimately repeal it under the Congressional Review Act (CRA).

Under the CRA, members of Congress are given the power to repeal a final rule issued by the Executive Branch within 60 legislative days of being published in the Federal Register.

This is where McConnell is likely to come in. He already tried to use the CRA to block the rule last year, when it was in its proposed stage. But that attempt was rebuked by the Government Accountability Office (GAO), which said McConnell could not trigger review of the regulation until it was in its final stage.

Now that the regulation is final, McConnell — or any other member of Congress — can file for review under the CRA.

But success in that arena won’t be easy. McConnell does only need a majority for it to pass the Senate, but Obama is sure to veto it, meaning at least two-thirds of the Senate would have to vote for repeal for the effort to be successful. According to the Hill, assuming all Republicans would vote for a CRA measure, 13 Democrats in the Senate and 45 Democrats in the House would be needed to override a veto.

“It seems like a pretty unsuccessful path, but I don’t think that means they won’t try,” Olson said. “They will do it because it will be a platform for them to voice their opposition to the rule, and it’ll be a show for their constituents that they strongly object to this.”

Only one regulation has ever been successfully struck down by the CRA, though it’s been tried at least 43 times, according to the GAO.

When it comes to ransomware, you don't always get … END_OF_DOCUMENT_TOKEN_TO_BE_REPLACED

Peyton Carr is a financial advisor to founders, … END_OF_DOCUMENT_TOKEN_TO_BE_REPLACED