You are here: Home / World / Obama Sends Memo to America on Climate Change 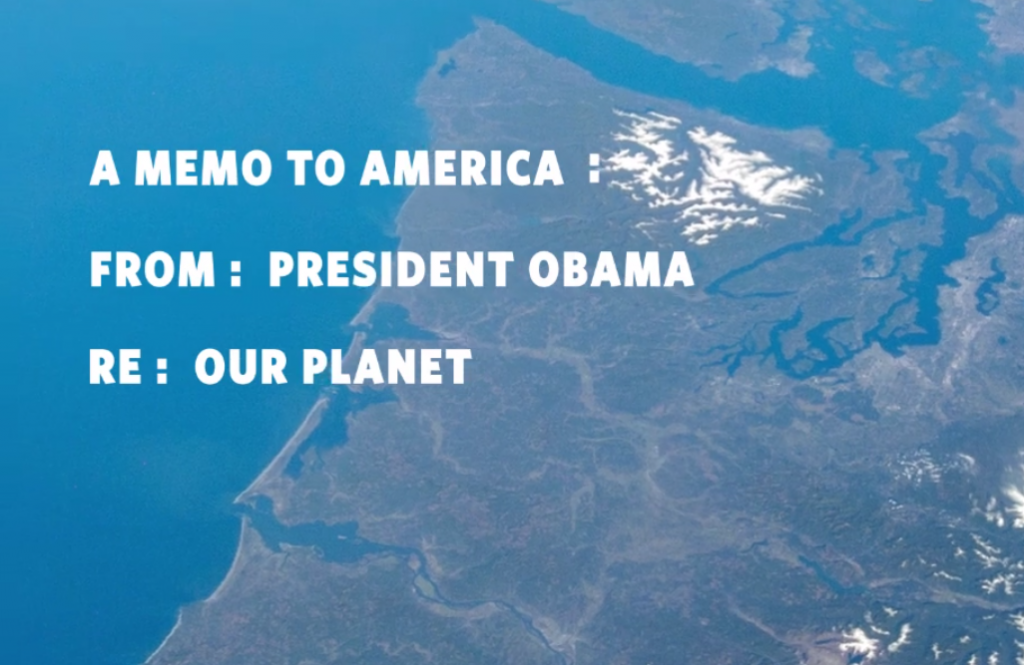 Under the plan, the EPA will adopt a rule that regulates carbon pollution from existing power plants for the first time, and in the video, Obama called it “the biggest, most important step we’ve ever taken to combat climate change.”

Compared to the proposed rule, the new final version cuts more carbon pollution from the power sector, does it with more renewable energy and less natural gas, while providing more flexibility along the way to states trying to meet their targets.

The final version of the regulation, according to a senior administration official, will actually reduce power sector carbon pollution 32 percent from 2005 levels by 2030. This is more ambitious than the 30 percent reduction over the same period in the proposed rule.

In the proposed rule, renewable energy generation capacity was expected to be 22 percent in 2030. In the final rule, that share is projected to be 28 percent. Instead of the plan leading to a significant, early shift to natural gas, the projection for gas-fired power plant generation will instead flatten to a business-as-usual trendline.

The senior administration official said that this would largely be driven by a Clean Energy Incentive Program which would reward faster renewable energy development. States will get credits for electricity generated in 2020 and 2021 by renewable energy projects that begin construction right after they submit their compliance plans. It also awards double the credits for energy efficiency projects in low-income communities.

The proposed plan’s structure will remain largely the same as proposed. By 2030, each state must meet a certain emissions reduction target, custom-tailored to their current energy mix. The EPA does not implement a top-down solution across the country to cut emissions, or force specific coal plants to close. Every state can meet its targets however it wants — closing old coal plants, building more renewables, increasing energy efficiency, or working with other states to balance emissions and cuts through market-based systems like the cap-and-trade model already being used by the RGGI states in the Northeast.

The administration projects that the final rule’s shift to energy efficiency and renewable energy will drop the average American electricity bill $85 a year by 2030, and lower by 88 percent the premature deaths caused by fossil fuel energy pollution. Carbon pollution traps heat and worsens smog, which both trigger asthma and heart attacks.

The rule had been expected to give states an extra two years to begin cutting emissions, according to a timeline document posted to the EPA website last week. The Washington Post also reported that states will have more time to submit and begin implementing their plans to meet their targets — two more years, or until 2022.

The final regulations will also change so that state targets will not be based upon how much they could cut emissions through programs that improve energy efficiency for consumers.

EPA administrator Gina McCarthy is expected to sign the final plan during Monday’s ceremony. Though the ceremony was scheduled to take place on the White House South Lawn, the New York Times reported that the event may have to be moved inside due to high temperatures.

In the next week and over the next several months, the president will be taking his case to the public, focusing on how climate change is already harming Americans. He will speak at the 2015 National Clean Energy Summit in Nevada and will be the first American president to travel to the Alaskan Arctic at the end of the month. Obama is also scheduled to talk climate change with Pope Francis, who recently released an encyclical about climate change, when he visits Washington, D.C. in September. In December, the U.N. will host talks aiming for a global agreement on greenhouse gas emissions reductions.

But the president got a head start addressing the American people in the video released Sunday. Relying on the fact — “not the opinion” — that the climate is changing and “threatening our economy, our security, and our health,” he said it is time to act.

BREAKING: On Monday, @POTUS will release his #CleanPowerPlan—the biggest step we’ve ever taken to #ActOnClimate.
https://t.co/BU1PF0wjUK

“Climate change is not a problem for another generation,” Obama said. “Not anymore. That’s why on Monday, my administration will release the final version of America’s Clean Power Plan.”

He noted that “power plants are the single biggest source of harmful carbon pollution that contributes to climate change.”

“But until now,” he continued, “there have been no federal limits to the amount of that pollution those plants can dump into the air. Think about that. We limit the amount of toxic chemicals like mercury and sulfur and arsenic in our air and water, and we’re better off for it. But existing power plants can still dump unlimited amounts of harmful carbon pollution into the air we breathe. For the sake of our kids, for the health and safety of all Americans, that’s about to change.”

Obama said that the administration had worked with states and power companies to ensure they have the flexibility to comply with the rule. Before releasing the proposed version of the rule last year, EPA said it had consulted with over two hundred groups over the course of well over one hundred meetings. This is in addition to 11 official public listening sessions.

Some of the trends the administration hopes to create with the plan are already happening — renewable energy capacity is growing dramatically, and this year natural gas replaced coal as the largest electricity generation source.

When it comes to ransomware, you don't always get … END_OF_DOCUMENT_TOKEN_TO_BE_REPLACED

Peyton Carr is a financial advisor to founders, … END_OF_DOCUMENT_TOKEN_TO_BE_REPLACED