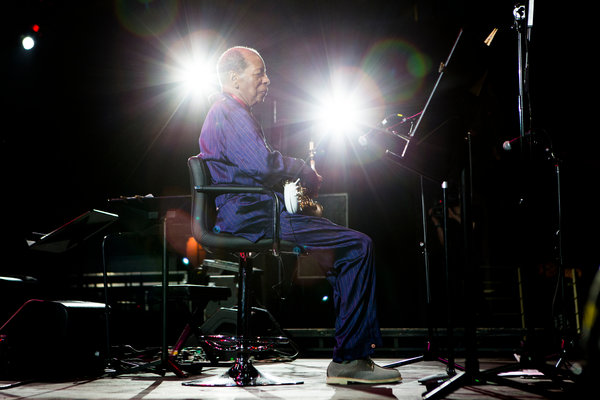 The alto saxophonist and composer Ornette Coleman, one of the most powerful and contentious innovators in the history of jazz, died on Thursday morning in Manhattan. He was 85.

The cause was cardiac arrest, a representative of the family said.

Mr. Coleman widened the options in jazz, and helped change its course. Partly through his example in the late 1950s and early ’60s, jazz became less beholden to the rules of harmony and rhythm, and gained more distance from the American songbook repertory. His own music, then and later, became a new form of highly informed folk song: deceptively simple melodies for small groups with an intuitive, collective language, and a strategy for playing without preconceived chord sequences.

Though his early work, a kind of personal answer to Charlie Parker, lay right within jazz — and generated a handful of standards among jazz musicians of the last half-century, he later challenged assumptions about jazz from top to bottom, bringing in his own ideas about instrumentation, process and technical expertise. He was also more voluble and theoretical than John Coltrane, the other great pathbreaker of that era in jazz, and became known as a kind of musician-philosopher, with interests much wider than jazz alone; he was seen as a native avant-gardist, and symbolized the American independent will as effectively as any artist of the last century.

Slight, southern, soft-spoken, Mr. Coleman eventually became a visible part of New York cultural life, attending parties in bright-colored satin suits; even when frail, he attracted attention. He could talk in nonspecific and sometimes baffling language about harmony and ontology; he became famous for utterances that were sometimes disarming in their freshness and clarity, or that began to make sense about the 10th time you read them.

Yet his music usually was not so oblique. At best, it could be for everybody. Very few adult listeners, at this point, would need prompting to understand the appeal of his early songs like “Una Muy Bonita” (bright, bouncy) and “Lonely Woman” (tragic, flamenco-esque). His run of records for Atlantic near the beginning of his career — especially “The Shape of Jazz to Come,” “Change of the Century,” and “This Is Our Music” — pushed through skepticism, ridicule and condescension, as well as advocacy, to become recognized as some of the greatest records in jazz history.

When it comes to ransomware, you don't always get … END_OF_DOCUMENT_TOKEN_TO_BE_REPLACED

Peyton Carr is a financial advisor to founders, … END_OF_DOCUMENT_TOKEN_TO_BE_REPLACED