You are here: Home / World / Owen Labrie Says He Had ‘Second Thought’ About Having Sex 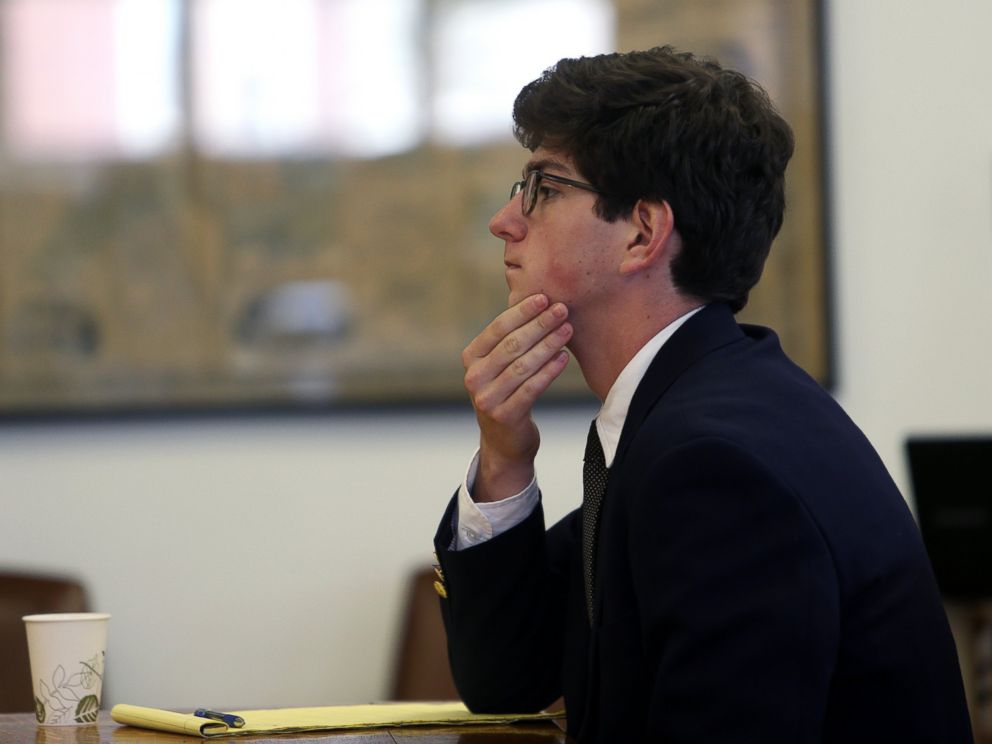 Defendant Owen Labrie, who is accused of raping another student at a prestigious New Hampshire prep school, took the witness stand in court today, describing how he and the alleged victim had flirted in the year leading up to the incident at the heart of the case.

Labrie, now 19, is accused of raping a student in May 2014 at St. Paul’s School, in Concord, New Hampshire.

“We’d make it a point to say ‘Hi’ or a wink or a nod or something silly, so it was nice, and because of that, all of my friends knew of my affection for [the victim] and I think all of her friends knew of hers for me,” Labrie said during his testimony this morning.

He went on to describe how they would regularly talk when out socially and dance at parties together on occasion.

The student who accused Labrie, whose name is being withheld because of the nature of the crime, appeared on the stand last week, offering emotional testimony about the events.

“I was raped!” she said loudly amid tears. “I was violated in so many ways.”

Labrie read emails and Facebook messages in court today that he exchanged with the alleged victim, using language that he admitted was “a little over the top. It’s flowery.”

He described how when he first messaged her as part of the “senior salute,” she said no, citing her closeness with her sister. Labrie said that was likely in reference to the fact that he and the alleged victim’s sister, who was in Labrie’s year, briefly dated when they first started attending St. Paul’s School.

Prosecutor Catherine Ruffle said in court last week that the encounter at the center of the case was part of a “senior salute,” a tradition at the prep school. Ruffle said that the “senior salute” practice was largely intended as a way for graduating seniors “to be with someone that they might have wanted to be with throughout” high school, and could include activities like walking to class together or kissing but “it might include a little bit more.”

She then said that some students believed Labrie and some of his friends had turned the tradition into a competition.

On the stand, Labrie described the events the night of the alleged attack. He said he and the other student went to the roof of a building on campus for “between five and ten minutes.”

When Labrie’s attorney, J.W. Carney, asked him why he went to the roof, Labrie said, “I thought it was a really beautiful view and I wanted to share it.”

“She was laughing. She said she was excited. We both commented that it looked really pretty. I thought [she] was having a great time,” he testified.

When they returned indoors, Labrie said they were holding hands and started to kiss. Later, he said he removed her sweatshirt, claiming that she lifted her arms to help him remove it. Labrie said he later removed a blanket from his backpack indoors that he had intended for the two to lie on when they were on the roof, but the roof was wet from recent rain. He said she helped him lay down the blanket on the floor and the two continued kissing.

“Did it seem to you that [she] wanted you to lay the blanket on the floor?” Carney asked, then asked if it seemed she wanted to lay on the blanket. Labrie responded yes to both questions.

“She helped me put it there. We kissed some more. I don’t know. She was smiling. Sorry, I don’t know,” Labrie said, when Carney asked him to explain his response.

“I was very fond of her. I felt a lot of affection toward [her],” Labrie said.

He said the two removed their shirts and pants and described how they were physically intimate. When asked by Carney if the activity was “mutual,” Labrie said it was, saying that the two continued to “giggle,” and he didn’t hear an objection from her.

“I thought to myself we’re going to have sex,” Labrie said, adding that the “kissing and fondling” led him to believe that sex would “come next.”

“I had a second thought while I was looking down at her,” he said, describing the moment after he went to get a condom from his wallet.

“It didn’t feel like the right move, and that’s not to say at all I slammed on the brakes,” he said. “It really slowed down and it reached the point where we were kissing lightly.”

“It wouldn’t have been a good move to have sex with this girl,” he said about not having sex. He said he asked her to check the time and they were planning to attend an a cappella concert that night on campus.

After attending the concert, Labrie said he went back to his room for “two minutes” before other male students congratulated him on having sex with the alleged victim.

Asked whether he knew how they had found out, Labrie said he thought the alleged victim had told other students and said that he had not told the other male students.

When other students asked Labrie if he had sex with the alleged victim, he said he answered “yes,” though he says it wasn’t true.

“I said ‘yeah’ to make myself look better to these boys,” Labrie said, adding: “The last couple days I wanted to look good and I wanted everyone to think it went great,” referring to his encounter with his accuser.

When the defense attorney later asked Labrie how long he had carried a condom in his wallet, Labrie said he did so all through high school. The prosecution objected to the question about whether other boys had the same practice, citing “relevance.”

The judge upheld the objection and then Labrie’s defense attorney said he had no more questions.

Labrie is charged with multiple felonies relating to the encounter. He has entered a not-guilty plea.

When it comes to ransomware, you don't always get … END_OF_DOCUMENT_TOKEN_TO_BE_REPLACED

Peyton Carr is a financial advisor to founders, … END_OF_DOCUMENT_TOKEN_TO_BE_REPLACED