You are here: Home / Sports / Packers’ Jordy Nelson Will Be Ready After ACL Surgery 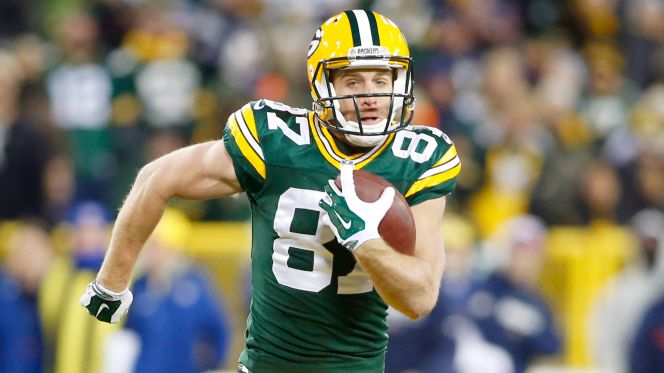 Given the sterling reputation his work ethic has created and the land-speed records his rehabilitation apparently set, no one associated with the Green Bay Packers seems to doubt that Jordy Nelson will return to his pre-injury form this season.

In fact, when the Packers’ Pro Bowl wide receiver met with reporters after the team’s official off-season program kicked off Monday, Nelson was asked if it’s possible he’ll come back better than he was before tearing the anterior cruciate ligament in his right knee during an Aug. 23 preseason game and missing all of last season while recovering from surgery.

And while Nelson counts himself among those who think he’ll be back to his field-tilting self when the Packers begin the regular season at Jacksonville on Sept. 11, he has considered the possibility that, with his 31st birthday next month, he could lose a step coming of the injury.

He’s just not worried about that happening.

“Because I think it’s a waste of time if you do,” said Nelson, who caught 98 passes for a franchise-record 1,519 yards and 13 touchdowns in 2014. “Because if I do lose a step, there’s nothing I can do about it. I’ve attacked the rehab the way I wanted to; it’s progressed the way I wanted to. I continue to work out the way the coaches and trainers want me to.

Before going down at Pittsburgh in the team’s third preseason game last summer, Nelson had caught at least 1,000 yards worth of passes in three of the previous four seasons — and the one season he failed to reach 1,000 yards was 2012, when he finished with 745 while missing four games and parts of two others with hamstring injuries.

“I’ve had guys tell me if you can take a year off from football, why not [have it] be Year 8, and get a little rest and come back for [Years] 9 through 12 or so?” Nelson joked.

Packers coach Mike McCarthy said at last month’s NFL meetings that Nelson was “ahead of schedule” in his comeback, and Nelson said Monday that the strength and conditioning staff gave him the same offseason workout regimen as the rest of his teammates received. He also took part in the same workouts as the rest of the guys on Monday inside the Don Hutson Center and in the Lambeau Field weight room.

Not only that, but Nelson has already begun running routes and feels he’s overcome what many players say is their biggest obstacle post-ACL surgery: Doubt.

“Everything we’ve done through rehab, I don’t have a mental block with anything,” Nelson said. “When we progress to something else — if it’s into the running or the jumping or the cutting or whatever, maybe the first time you are cautious with it. [The trainers] want you to be cautious with it because you haven’t done it, but the next time we [do] it, we’re good to go.

“I haven’t had anything — whether it’s slowing down after running or anything — where I’ve had that mental block. I don’t know if it’s because of the way [the injury] happened, [but if] I can’t jump up and land, then we have bigger issues than trying to play football.”

Although Nelson curtailed his offseason trips home to Kansas slightly because of his rehab, he said he, wife Emily and the couple’s two children normally spend most of the offseason in Green Bay anyway. He would come to the stadium each morning to work out but “be done by 11, 12 o’clock,” and the only week he took off was the week before Easter.

And while Nelson’s quarterback and friend, Aaron Rodgers, insisted Monday that the Packers are “going to let him get healthy as slow as he wants to,” Nelson hinted that his own timeline has him on the field for 11-on-11 work when organized team activity practices kick off next month.

“OTAs will be still up for discussion on how much takes place there,” Nelson said with a smirk, suggesting he might have to negotiate with McCarthy and the medical staff on that. “We’re right where we want to be. Look forward to continuing to progress, keeping track of it, and hopefully staying on the right path.”

When it comes to ransomware, you don't always get … END_OF_DOCUMENT_TOKEN_TO_BE_REPLACED

Peyton Carr is a financial advisor to founders, … END_OF_DOCUMENT_TOKEN_TO_BE_REPLACED