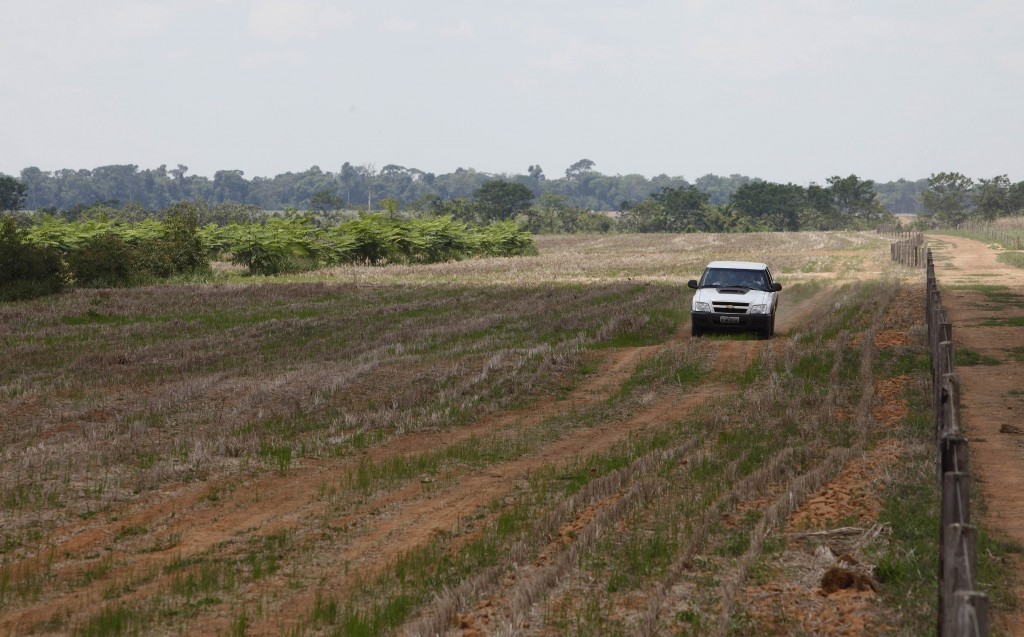 In this 2009 photo, researchers drive on the Fazenda Gramada government farm in Nova Canaa do Norte, Mato Grosso state, Brazil. Mato Grosso has made critical efforts to combat deforestation.

Next week, participants from nearly 200 nations will convene in Paris to negotiate an agreement aimed at reducing greenhouse gas emissions to curb global warming before the critical threshold of 2°C above pre-industrial levels. But while nearly all these countries already pledged to reduce emissions, their commitments are not enough to meet that target — at least not yet – and some groups aren’t willing to wait.

Thousands of cities, states, regions, provinces, businesses, and non-governmental organizations have already started to move aggressively on climate change. For cities, this means setting transportation, building, and power standards that substantially lower emissions. For companies, this can mean making sustainability a core business practice all the way down the supply chain, recognizing it as a sound policy that will not only help the planet but likely also bolster profits.

“Cities, states, companies, non-governmental organizations, and individuals are all helping to gain a groundswell of support for 100 percent renewable energy for everyone,” said Mark Z. Jacobson, director of the atmosphere/energy program at Stanford University, and the author of a study that provides a roadmap for the United States to convert to 100 percent renewable energy by 2050, and another that does the same for 139 countries.

“These groups and people are definitely important for getting information out to a larger audience and convincing policy makers to move in the right direction,” Jacobson told ThinkProgress.

Current efforts already underway at the subnational level could deliver greenhouse gas emission reductions of 2.5 gigatons of carbon dioxide equivalent (Gt CO2e) by 2020 and 5.5 Gt CO2e by 2050, according to a recently released study from the PBL Netherlands Environmental Assessment Agency. However, the study said that many of these activities already are included within pledges made by individual countries, estimating the overlap at 70 percent.

“This will not be enough to close the emission gap between pledges and the emission level necessary to remain on track to meet the 2 °C climate target,” the study says. “More action will be necessary in international initiatives and from national governments.”

The agency examined the impact of several large international cooperative initiatives, “all of which have quantified mitigation targets or include concrete measures, and are showing progress towards achieving these targets.” The researchers examined the impact of thirteen of the largest initiatives, concluding that the largest reductions would likely come from business activities such as the Top 500 companies in the Carbon Disclosure project, and city actions such as the C40 Cities initiative and Covenant of Mayors. Other initiatives with relatively large reductions are the New York Declaration of Forests and the HFC proposal to the Montreal Protocol.

“Apart from bringing about additional emission reductions on top of commitments already made by national governments, these initiatives can help to accelerate and increase the effectiveness of climate policy implementation,” the study said.

Calculations thus far suggest that voluntary commitments from nations going into the Paris summit would keep the warming increase to 3.5°C by the end of the century — still too high to avoid the catastrophic effects of climate — and reduce carbon-equivalent emissions by about 6 gtCO2e by 2030, about one-third the amount needed to get to the 2°C limit.

Nigel Topping, the chief executive officer of We Mean Business, a coalition works with private companies to reduce their carbon footprint, estimates the combination of current country pledges and subnational efforts could help stop warming at 2.7°C. In addition, the national pledges can help foster “concrete policies, which will then spur a low-carbon transition across both the private and public sector,” he told ThinkProgress. “That’s where the work of non-state actors and the importance of the Paris agreement gets into the picture.”

While it still is difficult to assess the overall impact of subnational efforts on climate goals, many activities suggest they have made a positive start.

Cities, for example, release about 70 percent of the world’s total energy carbon emissions, and 90 percent of cities are located on or near the coast, making them especially vulnerable to the impacts of climate change. So it is not surprising that world cities have begun to unite against climate change.

“They are on the front lines of climate change, since they are experiencing the droughts and floods and sea level rise – all the impacts of climate change,” said Johanna Partin, director of the Carbon Neutral Cities Alliance, a collaboration of global cities working to cut emissions by 80 percent or more by 2050.

“Much of this is happening because of leadership at the local levels,” she told ThinkProgress. “They are making the reductions happen within their borders, often without the support of the national level. The reason to look to 2050 is because it sets you in motion now. If you talk about getting to a 100 percent fossil fuel free system, you need to start planning now. A mayor has a lot more power over making quick, nimble change than what can be done at the federal level.”

Earlier this week, the C40 Climate Leadership Group and Arup, a consultancy firm, reported that cities have undertaken almost 10,000 climate actions in the six years since the Copenhagen climate meeting, and have committed to reducing their CO2 emissions by an amount equal to the annual carbon output of India.

The report found that 65 participating cities plan to introduce LED street lighting, a 250 percent increase from just 20 cities six years ago. Also 46 cities now use solar power generation, a 280 percent increase since Copenhagen, and 39 cities – four times as many as earlier – now rely on energy management systems to reduce consumption in municipal buildings.

In another study released last month, C40 said that investing in low-carbon infrastructure in the next five years would be four times less expensive than building high-carbon infrastructure now, and having to replace it later. The report said that urban policy decisions made before 2020 could determine one-third of the world’s remaining safe carbon budget.

More than 300 cities worldwide, including more than 100 U.S. cities, have signed onto the Compact of Mayors, pledging to take local action to curb their carbon emissions. The compact was launched during last year’s UN climate summit, and represents the world’s largest coalition of city leaders committed to supporting climate change action in their cities.

In addition to cities, states and provinces also have become involved in the effort to curb their emissions. The Under 2 MOU initiative, for example, has brought together 57 jurisdictions from 19 countries and five continents that have signed a memorandum of understanding agreeing to reduce greenhouse gas emissions between 80 and 95 percent by 2050.

Daniel Nepstad, executive director and senior scientist at the Earth Innovation Institute, which seeks to promote climate-friendly global rural development through sustainable farming, forestry and fisheries said that a large and difficult-to-quantify share of these subnational emission reductions are included within the national pledges.

He cited, in particular, the efforts in the state of Mato Grosso in Brazil, which represents about 25 percent of the emissions reductions of the memorandum’s signatories, achieved largely through reductions in deforestation and new reforestation, he said. “It is a window into the type of process that will be needed to solve climate change,” he told ThinkProgress. “One core message is that tropical deforestation is one of the key low-hanging fruits to begin progress now.”

However, a large and difficult-to-quantify share of these subnational emission reductions are included within the national pledges countries have made, he added. “It is best to see these two processes and mutually reinforcing,” Nepstad said. “We need national and subnational governments working together to tackle climate change.”

For instance, the White House’s Act on Climate initiative has prompted pledges from more than 80 U.S. companies — including household names such as Coca-Cola, Nike, and Goldman Sachs, to name just a few.

“We recognize that delaying action on climate change will be costly in economic and human terms, while accelerating the transition to a low-carbon economy will produce multiple benefits with regard to sustainable economic growth, public health, resilience to natural disasters, and the health of the global environment,” the company pledges say.

Finally, the B Team, an organization of major business leader and others, has called for net-zero greenhouse gas emissions globally by 2050, and has asked Paris negotiators to set this as its long-term goal for all countries. The group believes that such an ambitious goal will motivate the private sector to invest in the de-carbonization of the global economy, and generate needed momentum to ensure against failure.

Countries have submitted their [pledges] and they get us closer to 2 degrees, but it’s not close enough,” Peter Boyd, senior advisor for the net-zero initiative, told ThinkProgress. “If you don’t have a goal like net-zero, you’re never going to get there. It’s a great target, and we can use the same concept at the company level. All businesses can get in on this, and be a positive force. As a world, we want to leave the campsite as we found it.
Source link

When it comes to ransomware, you don't always get … END_OF_DOCUMENT_TOKEN_TO_BE_REPLACED

Peyton Carr is a financial advisor to founders, … END_OF_DOCUMENT_TOKEN_TO_BE_REPLACED