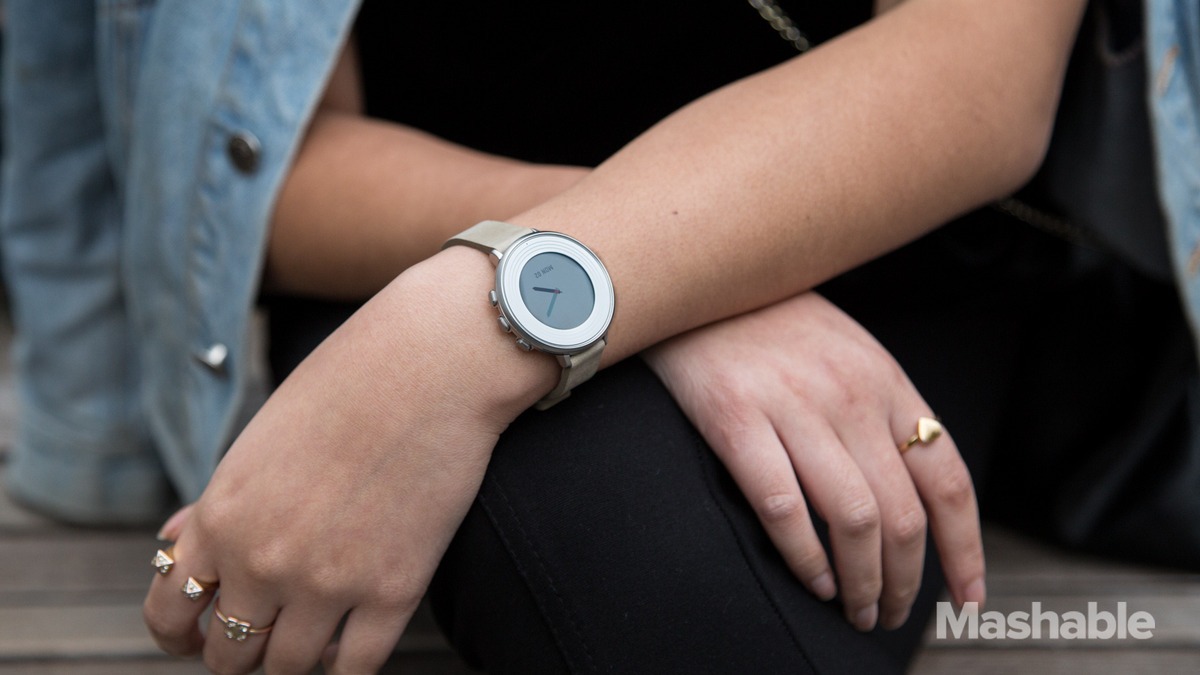 Six months after the release of the Pebble Time smartwatch, Pebble is back with another new smartwatch: The Pebble Time Round. The watch — which goes on sale next week for $249 — is the third watch the company has released this year. It’s also its most attractive.

Mashable Product Analyst Raymond Wong compared the Pebble Time Round to a modern take on the Swatch watch, and he’s not wrong. The thin design (even with its large bezel) and narrow leather band make this arguably the most watch-like smartwatch we’ve seen.

As a big fan of Pebble — going all the way back to its early Kickstarter days — I’m stoked the company decided to make a watch for a different type of person. Not everyone who wants a smartwatch has a gigantic wrist. Some of us want something more feminine, more compact and less “in your face.”

The Pebble Time Round is that kind of watch. The review model I was sent had silver accents and a white face (you can also get it in rose gold/white and black/black) and the thin profile really looks great on a smaller wrist.

This isn’t to say that the Pebble Time Round is only for women. It looked good on bigger wrists too, but the fact that Pebble is actually considering the other half of the population in a way that few other companies are, is, to me, a noteworthy step.

If you read my Pebble Time review, you’ll get a more in-depth look at the software and features of the Pebble Time Round. Like the previous model, it uses Pebble’s Timeline interface.

The idea behind Timeline is to take data from both your Pebble apps and from your calendar and show you what is happening nearby and around you.

Pebble apps can now have Timeline compatibility — meaning that information from those apps shows up on a running timeline of what is happening. This can be anything from when your favorite TV show airs, to what time the sun is going to set to when your flight is scheduled to arrive.

Because the Pebble Time Round has a round screen, app developers do need to update their apps to work with the new form factor. The good news is that that’s a pretty simple process and shouldn’t be too difficult for most of them.

The bad news is that, at the time of this writing, the vast majority of Pebble Time apps and watchfaces haven’t been updated to work on the Pebble Time Round.

This will probably change — and major apps like Uber and Swarm are already working — but it is something that concerns me.

Early on, the developer ecosystem was one of Pebble’s big differentiators. The large DIY, communal aesthetic was a boon for the Pebble early on because it really helped show the potential of apps on smartwatches in general.

But now that Apple, Google and Samsung are firmly in the mix, developers — even the indies — have limited resources and limited time to develop to all platforms.

This is not a unique problem to Pebble. Apple, Google and Samsung are facing this too. The difference is that those companies have a lot more resources and are playing the long game.

The good news is that the out-of-the-box experience with the Pebble Time Round is solid. It works with both iOS and Android (though notification support is more advanced and granular on Android) and many of the built-in apps are really good. The Notes app — which works with the voice memos app — can transcribe your voice notes in real time.

This works remarkably well and remarkably quickly. Making a quick voice memo and having the text appear instantly is actually a useful feature.

It’s also useful to be able to see my calendar at a glance and get information on the weather.

The round face of the Pebble Time Round is what makes it stand out. It has a color e-paper display that’s very readable outdoors but lacks the vibrancy of the smartwatches we’ve become accustomed to seeing.

As someone who has become used to the high-resolution display on my Apple Watch, going back to the lower-resolution e-paper display feels odd.

The screen is still plenty serviceable — and e-paper and its lower color figure means it is better at battery life — but I won’t lie, I would love to see this exact design paired with a high-resolution LCD display.

Of course, to do that would require a much bigger battery — something the thinness of the device really couldn’t allow.

As it stands, the Pebble Time Round has a battery life of about two days. Two-day battery life is pretty subpar for Pebble standards (its other watches last about a week) but in the pantheon of smartwatches, it’s actually an improvement. An Apple Watch or Android Wear device might get you through 24 yours, but 18 hours is more the norm.

Still, it was hard for me as an existing Pebble owner to get used to having to charge the watch every day. Or every other day.

It charges using a small magnetic pin connector on the back. It charges quickly, too — so if you do run out of juice, give it 15 or 30 minutes on the charger and go about your business.

Who is this for

I like the Pebble Time Round. A lot. It’s a great-looking smartwatch and for those who want an easy way to track notifications and access basic apps, its a good choice.

My biggest issue is actually the price. At $250, the watch is in the higher echelon of smartwatch prices (for companies not named Apple), for a device that, as I said before, is the epitome of normcore tech.

If the Pebble Time Round were $150 or even $200, I would recommend it to almost anyone who wants a cute smartwatch but doesn’t want to be bothered with a lot of the upkeep. But at $250, we’re getting closer to Apple Watch Sport territory.

It’s also higher-priced than the Fossil Q Grant — another great-looking watch built off of Android Wear. The Fossil Q Founder is only $30 more and it has a touchscreen.

The Pebble Time Round is Pebble’s most attractive smartwatch. But it’s also its most compromised.

Looks great, especially on smaller wrists • Waterproof • Battery life is better than the Apple Watch and most Android Wear watches

This is the best-looking Pebble yet and a great choice for women. I just wish it was $50 cheaper and had more apps.

When it comes to ransomware, you don't always get … END_OF_DOCUMENT_TOKEN_TO_BE_REPLACED

Peyton Carr is a financial advisor to founders, … END_OF_DOCUMENT_TOKEN_TO_BE_REPLACED