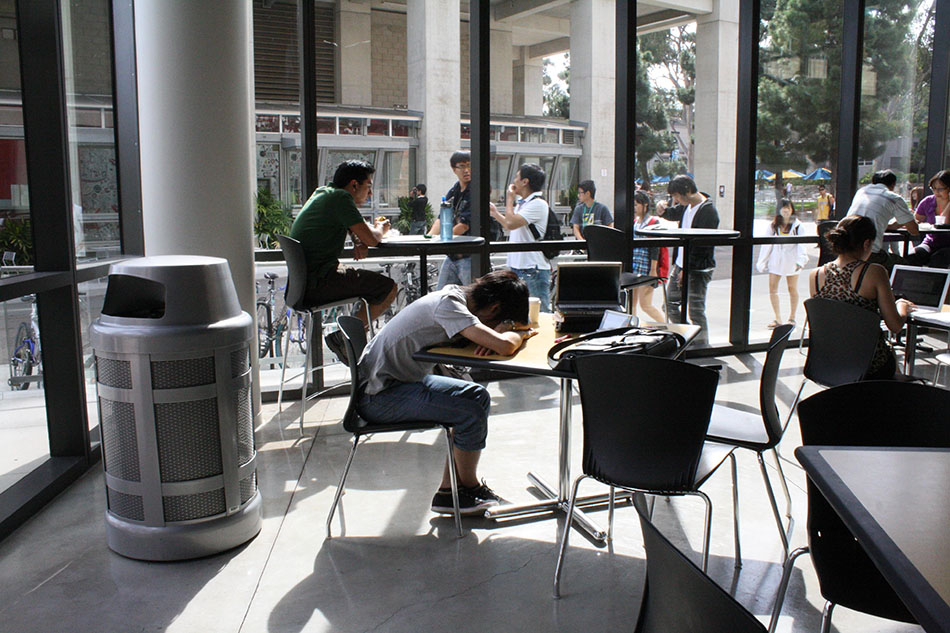 As the first semester of the school year reaches the halfway mark, countless college freshmen are becoming aware that their clothes are feeling rather snug. While the so-called freshman 15 may be hyperbole, studies confirm that many college students do put on five to 10 pounds during that first year away from home.

Now new research suggests that an underlying cause for the weight gain may be the students’ widely vacillating patterns of sleep.

A study in the journal Behavioral Sleep Medicine looked at the sleep habits of first-semester freshmen. Researchers followed 132 first-year students at Brown University who kept daily sleep diaries. After nine weeks, more than half of them had gained nearly six pounds.

There are many poor sleep habits that might have exacerbated their weight gains, a growing body of research indicates.

Was it abbreviated sleep? Optimally, experts say, teenagers need about nine hours and 15 minutes a night. These freshmen averaged about seven hours and 15 minutes. In a study earlier this year, in the journal PLOS One, researchers found that when teenagers are sleep-deprived, they more readily reach for candy and desserts.

Or were the Brown students’ late bedtimes the scale-tipping factor? On average, they went to bed around 1:30 a.m. A study this month in the journal Sleep that followed teenagers into adulthood found that each hour later bedtime was pushed during the school or workweek was associated with about a two-point increase in body mass index.

While both the amount of sleep and the lateness of bedtime may have played a role, the researchers in the Brown study identified a new sleep factor for predicting weight gain: variability, or the extent to which a student’s bedtime and waking time changed daily.

Unlike workers, who typically wake around the same time at least five days a week, students whose class schedules differ daily are inclined to sleep in one morning and get up earlier the next. Lures of the nonacademic variety, to which freshmen may be especially vulnerable, can also wreak havoc on a good night’s sleep.

The impact was more pronounced with boys, whose bedtimes and wake times shifted daily by an average of 2 hours, 37 minutes. It was as if they had to adjust to jet lag every day.

As they reset their body clocks, they set themselves up to pack on the pounds. Much like shift workers and frequent fliers, their metabolism rates might keep readjusting, and they might feel too tired to exercise and gravitate toward energy boosting foods dense with sugar and starch.

In other words, even if a student got seven hours of sleep two nights in a row, going to bed the first night at midnight and waking at 7 a.m., and on the next, falling asleep at 2 a.m. and waking at 9 would have made that sleep deprivation even tougher on the body.

“Variability is taking the field of sleep research a step further,” said Dean W. Beebe, an expert on adolescent sleep and a professor of pediatrics at Cincinnati Children’s Hospital Medical Center. Researchers typically measure the amount of sleep or the time that individuals go to bed or wake up. Daily variability makes the sleep puzzle more complicated, he said, but also adds an important piece.

The study of freshmen at Brown can only suggest a correlation. Some students lost a few pounds; others maintained their weight. They did not keep detailed food diaries. Nor did they keep precise activity logs, although Brandy M. Roane, the lead author and an assistant professor at the University of North Texas Health Science Center, said that because Brown students generally get around campus by walking, they almost certainly took 10,000 steps a day. The students were just asked whether they ate more or less than the previous day, and whether their exercise routine had changed.

Without a controlled sleep study in a laboratory to confirm these findings, Dr. Beebe said, variability might well be a marker for something else, such as a freshman who is struggling to regulate daily life: “They may just be disorganized and doing unhealthy things that contribute to weight gain.” Then erratic sleep and diet may not be causally related, he said. But at the very least, the study “points to the importance of consistency in sleep.”

Habits developed the first year of college can be significant, researchers said. “It’s a crucial period when they’re on their own and their health behaviors are solidifying into long-term behaviors,” said Dr. Roane, who analyzed data from researchers at Brown’s Sleep for Science laboratory.

The Brown study found some interesting gender differences. More girls than boys gained weight. But individually, the boys gained more weight. The highest gain for a girl was 11 pounds and, for a boy, 18.

In general, the girls’ sleep was more consistent than the boys’, and they tended to go to bed earlier. But more significantly, the researchers said, they woke up earlier, too, which in turn helped them get to sleep earlier. By contrast, because the boys were less consistent with their sleep schedules, how much they slept day to day fluctuated more.

Dr. Roane noted that by rising earlier, the female freshmen might also be able to eat breakfast, an important weight-management anchor for the day.

Dr. Roane said the study implicitly emphasized the importance of parents helping their children establish good sleep habits while they still lived under the same roof.

“A lot of parents give up setting bedtimes when their teenagers are in high school,” she said.

She urged parents to teach children about their own sleep needs so they could learn to set their own schedules. “At college, no one says, ‘you can’t sleep till 1 p.m.,’ so students need the skills to figure that out,” she said.

When it comes to ransomware, you don't always get … END_OF_DOCUMENT_TOKEN_TO_BE_REPLACED

Peyton Carr is a financial advisor to founders, … END_OF_DOCUMENT_TOKEN_TO_BE_REPLACED