You are here: Home / World / Pope Francis is Having an Historic Meeting that is 1,000 Years in the Making 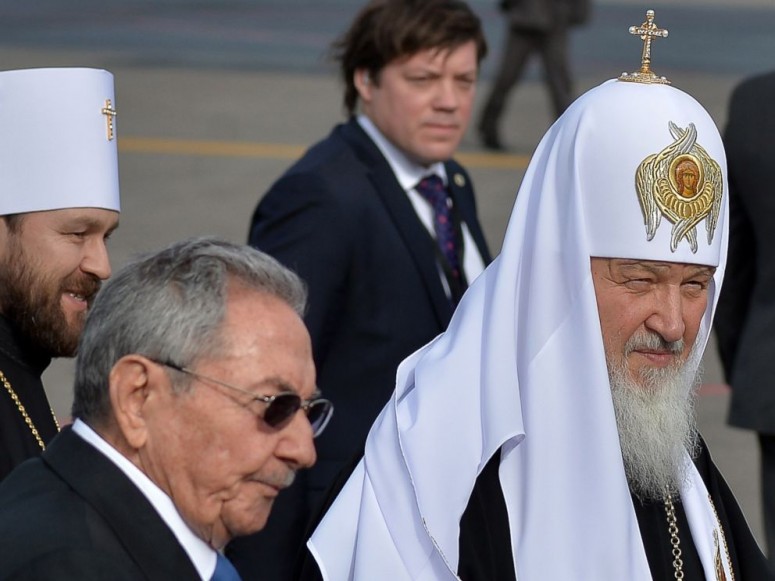 A sombrero-wearing Pope Francis appeared to be excited about his trip to Mexico today as he boarded the plane transporting him, but the most historic part of his trip comes before he lands south of the border.

Lengthy Lead Up to the Meeting

The meeting is about 1,000 years in the making as the two split back in the 11th century.

The Vatican has been pushing for such a meeting since the collapse of the Soviet Union but Moscow had always resisted. For years, the Russian Church has accused the Catholic Church of aggressively proselytizing in Russia, the Ukraine and Belarus, all of which are areas the Orthodox Church believed fell under its territory.

Popular convention dates the split between the Catholic and Orthodox churches to the so-called Great Schism in 1054, when the western pope excommunicated the head of the eastern church in Constantinople — now Istanbul — over differences in worship practices. The split solidified into centuries of deep hostility, with the two sides differing over a number of doctrinal issues, most importantly the pope’s status as Christianity’s supreme authority on earth. The Russian Orthodox Church long taught that the pope was the antichrist.

Hatreds have cooled in the past century, and both sides now tend to avoid publicly calling each other heretics. Today’s meeting will not actually be the first between an Orthodox Church leader and a pope; in 1964, Pope Paul VI met with the Ecumenical Patriarch of Constantinople, formally recognized as Orthodoxy’s spiritual leader but whose authority is contested by the Russian church.

The choice of Cuba as the meeting spot also falls under the question of territory, as it is seen as somewhat neutral land because Cuba has long had ties to the Russians but has a large Catholic population and hosted Pope Francis in September.

Pope Francis will be in Cuba for about three hours, making the stop a relatively short one, before heading to Mexico.

“The meeting has a political, a humanitarian significance,” said Yevgeny Nikiforov, a prominent Russian historian of the Church who helps run an Orthodox radio station. “But it has no divine significance.”

They are two very different figures: Pope Francis is known for being humble and regularly is driven in a Fiat, while Patriarch Kirill was once spotted wearing a $30,000 watch and is driven by chauffeur in a black Mercedes.

Under Kirill, the Russian Orthodox Church has grown close to the Kremlin, to the point where it often acts like a branch of the government. He is extremely close to Putin and often literally blesses or paves the way for some of Putin’s most controversial moves like the anti-gay law and clandestine military action in Crimea.

How Will This Change Relations?

John Julius Norwich, a bestselling historian of the Byzantine Empire, as well as of the papacy, said he believed the meeting was likely part of a broader effort by Francis to try and strengthen a Catholic church under assault by changing lifestyles in South America and mass violence in the Middle East.

“It is a step towards reconciliation, there is no question about it,” Norwich said. “But I think it’s going to be very much on the surface.”

“It’s angels dancing on the head of a pin. But they’ve been involved in it for 1,700 years. It’s going to take an awful long time to get over that. I can see it maybe getting to where they are much, much nicer to each other than they have ever been, but deep, deep down still hating each other’s guts,” he said.

When it comes to ransomware, you don't always get … END_OF_DOCUMENT_TOKEN_TO_BE_REPLACED

Peyton Carr is a financial advisor to founders, … END_OF_DOCUMENT_TOKEN_TO_BE_REPLACED