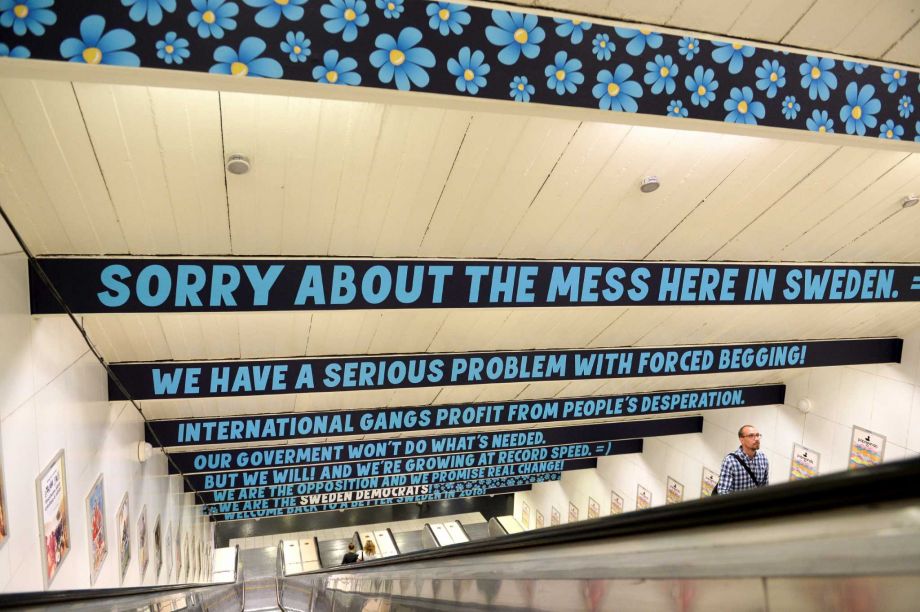 A poster campaign by the anti-immigrant Sweden Democrats at a subway station in central Stockholm has stirred outrage in the Nordic country. The posters plastered above the escalators at Ostermalmstorg subway station are directed to tourists visiting the Swedish capital.

The posters apologize for “the mess” in Sweden, saying the country has a problem with “forced begging” organized by “international gangs.” Critics say the message spreads racist misconceptions about eastern European Roma, also known as Gypsies, who are begging in Sweden. Anger has also been directed at Stockholm’s public transport provider SL, which is owned by the city council and is profiting from the ads.

Around 1,000 people gathered in downtown Stockholm on Tuesday to demonstrate against “SL’s spread of racism and the normalization of racism in Sweden.” After the demonstration, some of the protesters stormed the subway station and tore down the posters, according to local daily Aftonbladet.

“It is measly and cowardly” by the Sweden Democrats to target the Roma, which is the poorest and most discriminated group in Europe, said Sven Hovmoller, from the organization HEM which helps homeless European Union migrants in Sweden.

Protesters also used social media to express their dismay at the ad campaign, posting counter messages like: “Sorry about the mess here in Sweden. We have neo-fascists in the parliament.”

The advertising campaign comes amid a surge in immigration to Europe from war-torn countries in Africa and the Middle East, as well as increased support for far-right groups in many European countries. A recent anti-immigrant billboard campaign by Hungarian Prime Minister Viktor Orban’s government has also been met with protests and counter messages.

SL spokesman Jesper Pettersson said the company’s policy allows advertising by all political parties as long as it is not illegal. He said SL officials had reviewed the ads and concluded that they were legal.

However, the office of Sweden’s Chancellor of Justice said it has received more than 50 complaints and will investigate whether the publishers are inciting racial hatred.

Sweden’s left-leaning government in June put forward a proposal to increase its cooperation with Romania and Bulgaria to help people who travel from those countries to Sweden to beg. The opposition Sweden Democrats, the third-biggest party in the country’s parliament, say that is not enough and have called for visas for people traveling from Romania and Bulgaria to Sweden.

When it comes to ransomware, you don't always get … END_OF_DOCUMENT_TOKEN_TO_BE_REPLACED

Peyton Carr is a financial advisor to founders, … END_OF_DOCUMENT_TOKEN_TO_BE_REPLACED