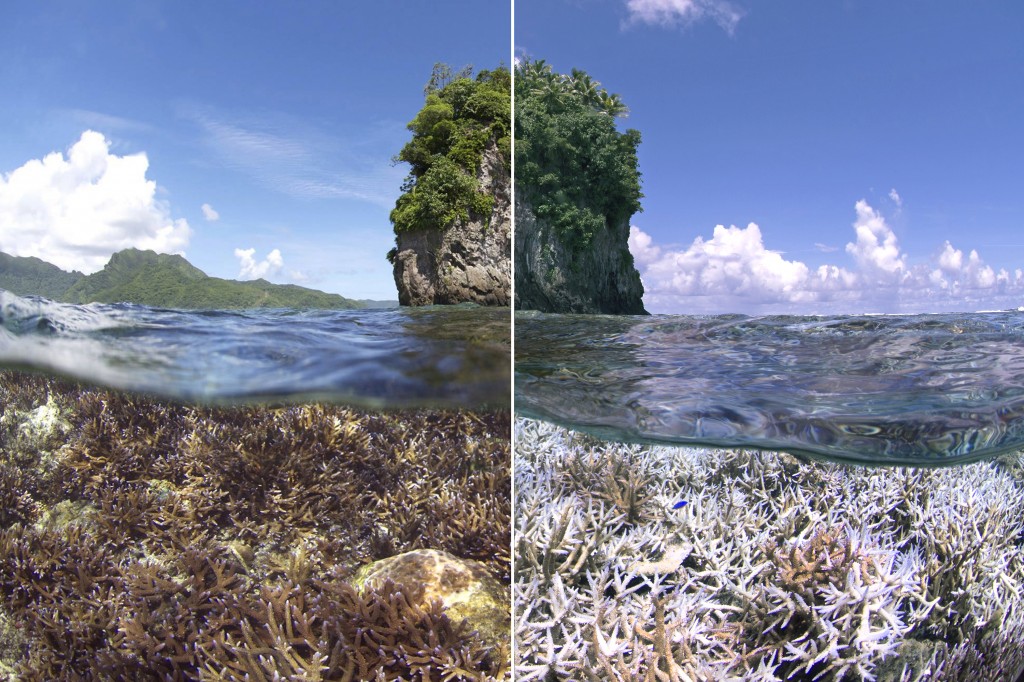 For the third time in recorded history, a massive coral bleaching event is unfolding throughout the world’s oceans, stretching from Hawaii to the Indian Ocean. A group of ocean scientists from the National Oceanic and Atmospheric Administration (NOAA), XL Catlin Seaview Survey, the University of Queensland, and Reef Check, confirmed this bleaching event is being brought on by a combination of a strong El Niño pattern, a warm water mass in the Pacific called “the Blob,” and increasingly warming ocean temperatures brought on by climate change.

This potentially lethal mixture of elements is expected to impact about 38 percent of the world’s coral reefs by the end of this year and kill over 4,633 square miles (12,000 square kilometers) of reefs. NOAA predicts that by the end of 2015, almost 95 percent of U.S. coral reefs will have been exposed to ocean conditions that can cause corals to bleach.

“This is already an unusually long time” for a coral bleaching event to be going on, said Mark Eakin, NOAA’s Coral Reef Watch coordinator. “And El Niño is expected to continue well in to next year, so it is expected to that this will start all over again in 2016 and may get worse.” 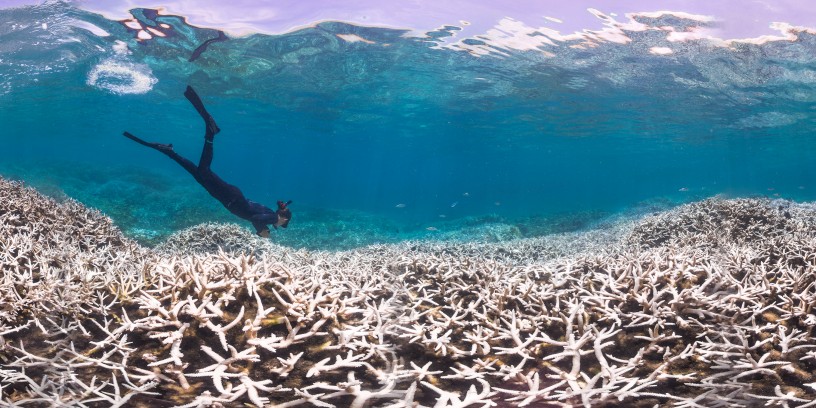 This bleaching event is of particularly high concern to ocean experts because of its duration and intensified causes. Eakin explained to ThinkProgress that this bleaching event began in June 2014, and has been continuously spreading across the Pacific Ocean. By 2015, coral bleaching was occurring in the south Pacific Ocean, in areas such as the American Samoa Islands and the Solomon Islands. It has now spread further in to the Indian Ocean and the Caribbean Sea, and coral bleaching has been reported in Florida, Cuba, Bahamas, Haiti, Puerto Rico and other coastal countries. Coral in Hawaii, specifically, is in the worst condition scientists have ever seen. This is only the second bleaching occurrence in the Hawaii region’s history.

“People are very dependent on coral reefs around the world. Half a billion people rely on coral reefs and fisheries to survive,” Eakin said. The organizations also indicated that over $30 billion in income is at stake because of this event.

According to the XL Catlin Seaview Survey, 93 percent of the heat that’s been generated by climate change has been absorbed by the ocean. So, coral bleaching acts as a visual indicator of ocean warming. When corals are stressed by temperature changes, as well as changes in amount of light or nutrients, they expel the symbiotic algae that live in their tissues, which causes them to turn completely white or pale. Without the algae in their tissues, coral loses its major source of food and is more susceptible to disease. Coral can bounce back from small amounts of bleaching, but long-term bleaching is often deadly.

NOAA’s standard 4-month bleaching outlook shows a threat of bleaching continuing in the Caribbean, Hawaii and Kiribati, and potentially expanding into the Republic of the Marshall Islands. CREDIT: NOAA

A World Wild Life study released last month predicted losing all coral reefs by 2050 due to warming oceans and ocean acidification. Coral reef ecosystems make up only 0.1 percent of ocean area, but nearly a quarter of all marine species depend on them to survive and rely on their habitat.

“A lot of the world’s marine protected areas (MPAs) are focused on coral reefs and they are a very important way to protect coral reefs,” Eakin said. “But, at a time like this, even they are not enough.”

Jennifer Koss, NOAA Coral Reef Conservation Program acting program manager, said in a statement that experts need to “think globally and act locally” to start fixing or slowing this problem. “To solve the long-term, global problem, however, we need to better understand how to reduce the unnatural carbon dioxide levels that are the major driver of the warming,” she said.

The effects of coral bleaching can be minimized by ensuring that local policies — like over-fishing and pollution regulations — are enforced. Shiva Polefka, ocean policy analyst at Center for American Progress, told ThinkProgress that although Marine Protected Areas can be a tool for regulation, more needs to be done to ensure coral’s survival.

“As scary as global warming and bleaching events are, corals face an array of human pressures, and if we can manage those better, lessen them, then coral reefs have a fighting chance to survive the warming that is already locked in and underway,” he said via email. 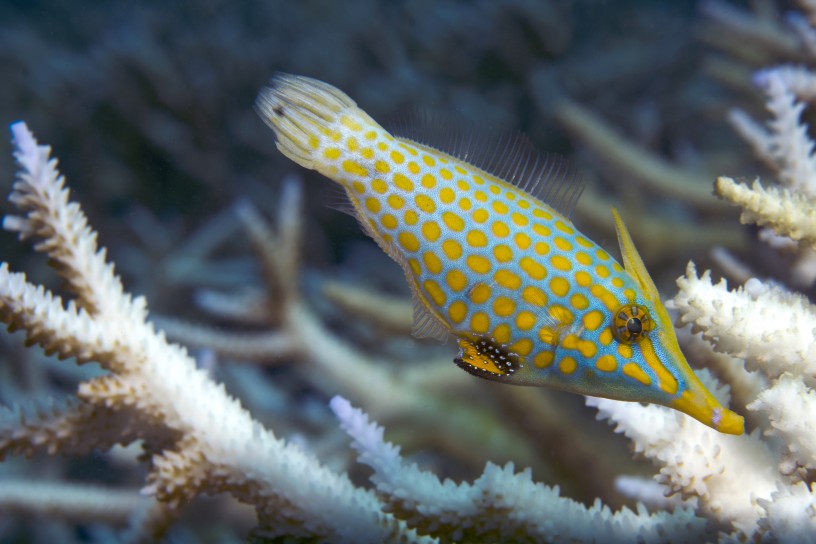 A recent discovery around Heron Island, located off the coast of Queensland, Australia, found that the yellow finger corals have built up a resiliency to ocean acidification. This is most likely a response to fluctuations in temperature and pH, Mongabay reported.

When it comes to ransomware, you don't always get … END_OF_DOCUMENT_TOKEN_TO_BE_REPLACED

Peyton Carr is a financial advisor to founders, … END_OF_DOCUMENT_TOKEN_TO_BE_REPLACED