You are here: Home / Business / The Rockefeller Center Christmas Tree’s lights were turned on 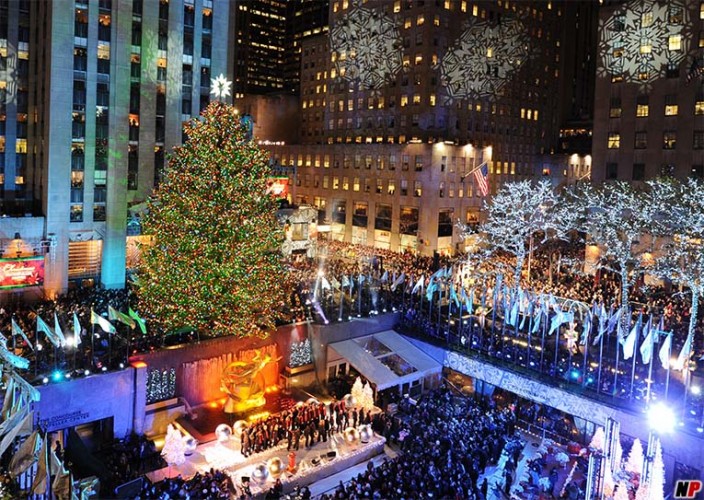 Keeping a tradition that has been going for eight decades, the city of New York turned on the lights of the Christmas Tree, installed at the Rockefeller Center, on Wednesday, in an event which marks the beginning of the winter holidays, EFE reports. The light installation that decorates the Norwegian tree brought from Oneonta to the North of New York was turned on in an event which was preceded by a show of live music. Approximately 8 kilometers of electrical cable were needed to link the 50,000 LED lights, which adorns the 90 year old tree, with a height of about 29 meters. At the top of the tree was installed, according to a tradition dating from 2004, a star adorned with 25,000 Swarowski crystals with a diameter of three meters. The lights were turned on by the actors Kate McKinnon and Alec Baldwin.

The mayor of New York, Bill de Blasio was also present at the festivity. The lights were turned on at the local time 20.58. Prior to this event the people could attend to a great live performance of artists like Tori Kelly, Josh Groban, Tony Bennett, Neil Diamond, Dolly Parton and Sarah McLachlan. The tree will be lit every night until January 7, and on Christmas day will remain on for 24 hours. This year the ceremony was held in the middle of increased security measures, because of the terrorist attack risk and the backpacks and umbrellas were forbidden. Even so, thousands of people came to attend one of the most popular Christmas traditions in New York. The tradition of the Christmas tree at the Rockefeller Center started in 1931. The highest tree installed at the Rockefeller Center was the one from 1999, having 30.5 meters and being brought from Killingworth, from the state of Connecticut.

When it comes to ransomware, you don't always get … END_OF_DOCUMENT_TOKEN_TO_BE_REPLACED

Peyton Carr is a financial advisor to founders, … END_OF_DOCUMENT_TOKEN_TO_BE_REPLACED