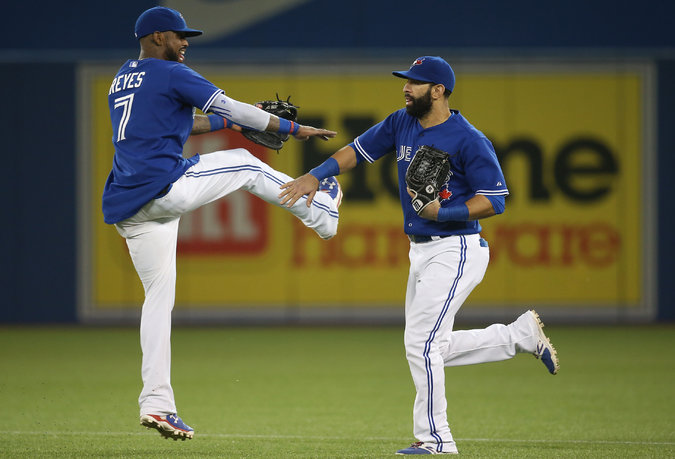 Toronto is on its longest winning run since a nine-game streak from May 20 to 28 last year.

Copeland, a 27-year-old right-hander who made his big league debut in relief on May 2, started in place of Aaron Sanchez, who was skipped because of general soreness.

Copeland allowed one run and six hits in seven innings, struck out four and walked none.

REDS 5, PHILLIES 2 Ivan De Jesus Jr. homered for the second time in three games, and host Cincinnati swept Philadelphia after losing shortstop Zack Cozart to a knee injury. Cozart twisted his right ankle and knee as he tried to beat out a grounder in the first inning.

Jon Moscot got his first win in his second major league start. He gave up two runs and six hits in six innings.

Martinez had a shutout until Ben Paulsen’s two-run homer in the seventh. He gave up eight hits in six and a third innings and tied a career high with two singles at the plate.

ORIOLES 5, RED SOX 2 Adam Jones drove in a run and played exceptional defense behind the left-hander Wei-Yin Chen, who earned his second win of the season for host Baltimore.

Jones, a four-time Gold Glove winner, threw out a runner from center field and made two fine catches. He also put Baltimore up by 3-1 in the third with a run-scoring single.

Morton struck out six and walked three to win his fourth straight start since coming off the disabled list last month. He did not allow a hit until Aramis Ramirez led off the fifth with a single up the middle.

Johnson had an R.B.I. single in the second inning in his return after missing 24 games with a strained right oblique. Cameron Maybin drove in a run with two of Atlanta’s 14 hits.

Longoria, who started at third base after being out of the lineup the past three games because of a sore left wrist, put the Rays up by 3-2 with a solo homer in the third off Jered Weaver.

Jake Arrieta shut out the Tigers until Yoenis Cespedes hit a three-run shot of his own in the sixth. The Cubs led by 6-0 before that, and Chicago added six more runs in the seventh.

When it comes to ransomware, you don't always get … END_OF_DOCUMENT_TOKEN_TO_BE_REPLACED

Peyton Carr is a financial advisor to founders, … END_OF_DOCUMENT_TOKEN_TO_BE_REPLACED