You are here: Home / Featured / The scientists studying Otzi: the global warming could lead to more mummies discovery 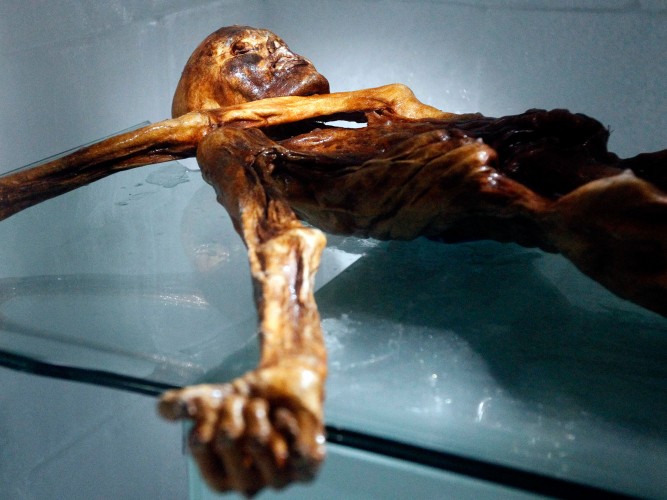 25 years after it was discovered, Otzi – the oldest mummy from Europe – continues to reveal its secrets as the technology advances. Am important congress having the ‘Iceman’ in center begun in Bolzano (North of Italy) where more discoveries related to this mummy will be presented, including the one regarding the bacteria found in its stomach and the death’s circumstances. The researchers believe that other discoveries similar to Otzi will follow, as the icebergs will melt because of the global warming and these discoveries will bring to light new evidences like the footwear object discovered close to the mummy and about which was recently announced that would be with 500 years older than Otzi. Albert Zink, the director of the Mummies Institute, stated that the people are more aware that in the mountains could be other mummies and the melting of the icebergs makes them to believe that.

The mummy was discovered in September 1991 and it was named Otzi because it was found in the Ötztal Alps. The man died with a couple of hundred years before the Stonehenge construction and before the first Egyptian pyramids. It seems that Otzi was hit from behind, with an arrow whose edge was found in the shoulder and then he was killed through a head hit, according to one of the studies done on the body that is 5.300 years old. The researchers revealed that the man consumed ibex meat with about 12 hours before he died. Also, it was found that he had an intolerance to lactose, he was suffering from the H. pylori infection and he inherited a genetic predisposition for heart diseases although he had a very low percent of fat. Otzi was 46 years when he died and his body has 61 tattoos made with medicinal purposes, in points that correspond to ones used in acupuncture today.

When it comes to ransomware, you don't always get … END_OF_DOCUMENT_TOKEN_TO_BE_REPLACED

Peyton Carr is a financial advisor to founders, … END_OF_DOCUMENT_TOKEN_TO_BE_REPLACED