You are here: Home / Automotive / A section of solar road is tested in the North-East of France 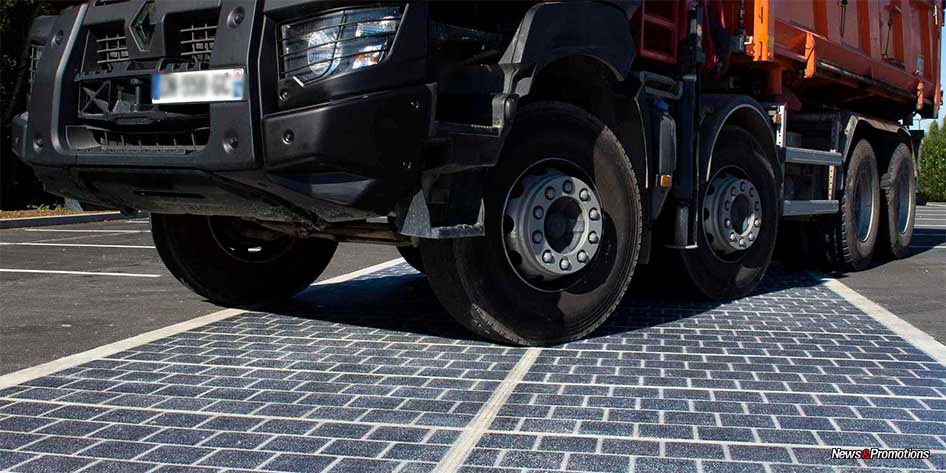 The first solar street in the world was put into operation in Normandy, in the North-East of France, with a technology which is still in the test phase by which a kilometer of road has been paved with very solid solar panels, according to the agencies France Presse and EFE. The photovoltaic panels have been glued on a line of one kilometer road on a highway at the exit of the Tourouvre village. The surface of 2,800 square meters of solar dales should allow the production of the equivalent of the electricity used for the public lighting to a city with 5,000 inhabitants, according to the company responsible for this project. The project has been carried out by the Colas company, a subsidiary of the French group Bouygues, in partnership with the public institute of research Cea Tech. The cost of the work, 5 million euros, was covered by a State subvention.

The installation has been tested during the last months on four pilot locations in France, in parking places or in front of the public buildings, but with a much smaller surface of the solar panels. A similar idea was experienced in the Netherlands, where a solar band for biking of 70 meters has been put into function two years ago in the North of Amsterdam. The idea is to stick along the road these solar dales protected by a resin to produce electricity.

The advantage is that the production of electricity doesn’t bother anyone in these areas which are on occupied only 20% of the time, according to the Colas company. But there is also the inconvenience that flat panels produce less electricity than the inclined ones and the cost of electricity produced in this way is much higher than the price of the one provided by the solar panels installed on the roofs.

When it comes to ransomware, you don't always get … END_OF_DOCUMENT_TOKEN_TO_BE_REPLACED

Peyton Carr is a financial advisor to founders, … END_OF_DOCUMENT_TOKEN_TO_BE_REPLACED